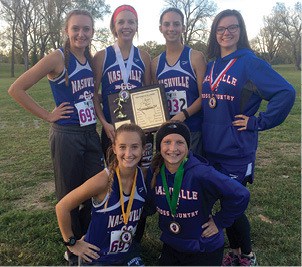 For the first time since 2010-2011 the Nashville Hornettes girls cross country team won the Southern Illinois River to River Conference Mississippi Division championship. The girls team finished 16 points ahead of second place DuQuoin. The boys team finished in second at the conference meet, as Pinckneyville came away victorious. The cross country teams also competed in Hamilton County Cross Country Invitational, and the Benton Invitational to finish the regular season.

The cross country teams then traveled to DuQuoin for the SIRR Conference Meet, which was held at the DuQuoin Fairgrounds on October 13. The girls won the meet, with four runners in the top six. The boys finished second, but had the top overall finisher and three of the top ten.