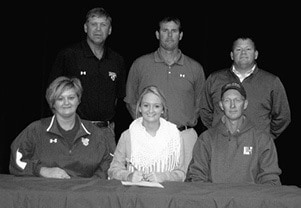 After her career at Nashville Community High School is over, senior Morgan Fox, will become a Lynx. Fox will be a part of the cheerleading team, as well as the track team at Lindenwood-Belleville next year. While at Nashville High School, Fox has been a member of the cheerleading squad, as well as the track and field team, where she competed in pole vault for the Hornettes. Fox was a part of the Hornettes track team last season that won conference, won their regional, and won their sectional.

Fox said of her decision "it was pretty much between Lindenwood and McKendree, and I went and visited Lindenwood and I really just loved the campus and the cheerleading program. The coach seemed really determined to do well at Nationals. "

While at Lindenwood-Belleville, Fox said that she would be doing both cheerleading and track and field, focusing on the pole vault. Last year, Fox advanced out of regionals in the pole vault but did not make it out of sectionals.

Fox said of all the things at Nashville, she will most miss her coaches. “I really enjoyed Coach Alli and Coach Fischer, and I like cheering at the football and basketball games and cheering on my hometown.”

Fox said while at Lindenwood-Belleville she wants to major in Human Resource Management and minor in Marketing.