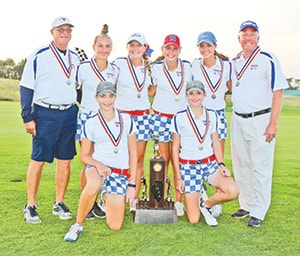 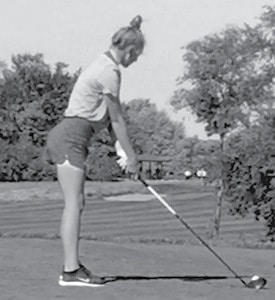 After winning the conference championship, the regional title, and the sectional title, the Nashville Hornettes golf team brought home some more hardware as they capped off an amazing season with a runner-up finish in the Class 1A State Tournament. This season marked the fifth time in the last seven seasons that the Nashville Hornettes came away with a top-four finish, the first since 2013.

After the first round of competition, the Hornettes were 11 strokes behind Charleston. The Hornettes were led on day one by senior Jill Guetersloh, who shot seven strokes over par with a 79. Hope Rueter was second on the team with an 82, followed by Rachael Kell with an 84, and Jordan Stiegman with a 92. The top four scores from each day counted towards the overall team score. Both Sara Guetersloh and Brooke Bartling just missed out on cracking the top four for the Hornettes as Sara Guetersloh finished with a 94 in round 1 and Bartling finished with a 95. 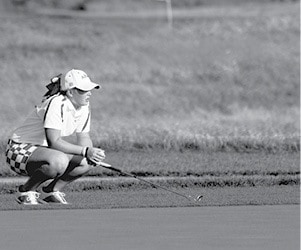 ABOVE, FROM LEFT: Jordan Stiegman lines up her shot on the green at Red Tail Run Golf Course, in Decatur; Rachael Kell hits an apporach shot during the State Tournament, which was held Friday October 14, and Saturday October 15; Brooke Bartling putts the ball in on the 18th hole during the State Tournament; Hope Rueter tees off during the Class 1A Girls Golf Tournament. BELOW LEFT: Jill Guetersloh knocks in a putt. BELOW RIGHT: Sara Guetersloh knocks through a putt. 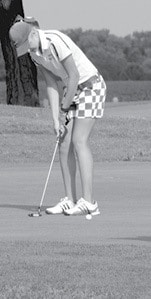 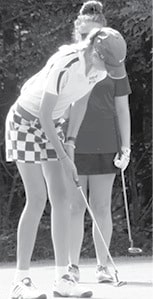