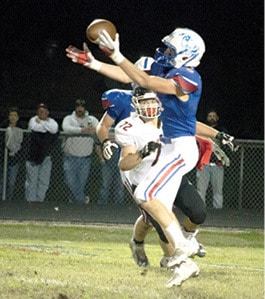 Hornets senior Grant Reed makes a catch during the Hornets 64-27 loss to DuQuoin in the final regular season home game of the season for Nashville.

One week after going to double overtime in a win over Pinckneyville, the Nashville Hornets could not come away with a victory in their final regular season home game of the season. DuQuoin, looking to clinch the Southern Illinois River To River Conference Mississippi Division outright, ran the ball for 534 yards on their way to a 64-27 victory over the Hornets. The loss moved the Hornets record to 5-3 on the season, and the Hornets need a win on the road against West Frankfort to clinch a playoff spot.

DuQuoin started the game quick, needing less than two minutes to score. The Indians got a ten yard touchdown run from Zayne Fornear to get the early lead. Fornear set up the touchdown with a 50 yard run on the previous play.

The Hornets would come back with a long scoring drive themselves as they took their first drive 66 yards for a touchdown. The Hornets got big plays out of Andrew Kash throughout the drive as he went 4-5 for 28 yards and a touchdown through the air on the drive. After a pass interference call on DuQuoin gave Nashville the ball at the 14 yard line, Kash would find Neil Kachuba on the next play for a touchdown with 5:39 remaining in the first quarter.

DuQuoin would take control of the game from there, scoring 14 unanswered points to end the first quarter, and 29 unanswered point overall to take a commanding 36-7 lead into halftime. After going up 14-7 on a touchdown from Caleb Vogel, the Indians defense got a big turnover, as Donoman McBride picked off a pass from Andrew Kash leading to a Fornear touchdown.

The Hornets would get a takeaway of their own late in the first quarter, when Grant Reed recovered a fumble for a touchback, but were unable to take advantage.

As the second half started, the Hornets again had a long touchdown drive, but could not sustain the momentum. Kash capped off an eleven play drive with a 32 yard touchdown run to cut DuQuoin's lead to 36-14.

The Hornets would get as close as 43-21 on a two yard touchdown reception by Ethan Reid, but DuQuoin cruised to a 64-27 victory.

After the game, Hornets coach Tim Kuhn talked about the loss. "DuQuoin is always tough. We prepared, we did we could in terms of preparation, but we just didn't find away to get things done this evenin."