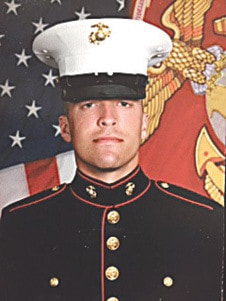 The citation reads: “For professional achievement in the superior performance of his duties as optics technician at Firebase Bell, Iraq. Hand selected to support Operation Inherent Resolve Corporal Metcalf was instrumental in assisting with the construction of the firebase’s foundation consisting of 600 meters by 650 meters perimeter, 12 fighting towers, five underground bunkers and 100,000 sq meters of combined obstacle belts for the security of Firebase Bell. As the maintenance chief, he became a force multiplier when he tracked and repaired weapons systems including 60mm mortars, MK-19 grenade launchers, M77 howitzers, night vision goggles, thermal sights, laser range finders and communications assets. His actions maintained maintenance readiness above 90%, in a very harsh environment, which directly contributed to the success of all missions aboard Firebase Bell. Corporal Metcalf’s initiative, perseverance, and total dedication to duty reflected credit upon himself and were in keeping with the highest traditions of the Marine Corps and the United States Naval Service.”

Cpl. Metcalf is the son of proud parents J.W. and Diane Metcalf. He is a 2006 graduate of Nashville High. He joined the Marines in 2013 and is now stationed at Camp Lejuene, N.C.