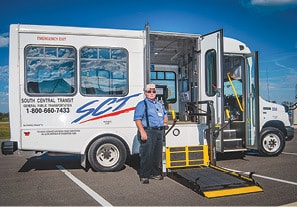 SCT driver Larry Harrison of Nashville in front of his bus at the Kaskaskia College Nashville Education Center.

South Central Transit, or SCT, is the Illinois Department of Transportation–designated provider of public transit for Washington County since January of 1999. SCT helps residents in Washington County get from place to place, but in doing so, can connect its riders to the rest of the world, and act as a force for economic development.

Public shuttles are “an opportunity to move a greater number of people at the same time that all have the same destination in mind,” said Sherri Bassen, SCT’s marketing and public relations director. “Right now, in Nashville, our biggest ridership is on these shuttles, for employment purposes, out to the factories.”

The “Yankees” route covers Washington County, and starts off in Centralia, heading through Wamac, Irvington and Richview, and then to Ashley where it picks up a transfer from the “Reagan” route, coming west on State Route 15 out of Mt. Vernon. It then continues west to Nashville, with stops at Antolin, Nascote, GDB, NOTS, and the Washington County Courthouse.

The Ashley transfer pickup at the city park is scheduled at 6 a.m., 2 p.m. and 10 p.m., with the Nashville stops following through to the Washington County Courthouse stop at 6:45 a.m., 2:45 p.m., and 10:45 p.m. The routes run every Monday through Friday, and riders are asked to be at the stops at least five minutes prior to the scheduled time.

Cost for the shuttle routes is $2 per trip, or $0.50 to ride just within city limits.

Demand response rides are available Monday through Friday, 9 a.m. to 3 p.m., and riders can call the SCT scheduling line from 24 hours to up to two weeks in advance to schedule a ride. The cost for ages 5 through 59 is $2 per trip.

Due to a grant in conjunction with the Area Agency on Aging of Southwestern Illinois, riders age 60 and over can ride on an donation basis, paying $0.50, $1, or whatever they are able.

The scheduling line for demand response service can be reached at (800) 660-7433, and they can be helpful not just in scheduling the ride, but in helping those new to the service with what they should expect and how exactly the service will work. Generally, the scheduling line will try to tell a rider exactly when they can expect their ride, but they will sometimes need to call the rider back, though this is not usually the case.

Demand response rides can help riders get to the doctors office or hospital, the grocery store or other places for shopping, or wherever a rider might need to head.

Between the two types of shuttles, people in Washington County, as well as those in Jefferson, Marion, Franklin, Perry and Clinton Counties, can get ton where they need to go at low expense to them, even without access to an automobile.

Right now, the SCT public shuttles are “definitely the most cost-effective way to use the service,” Bassen said. “Is it going to work for everyone, every time? No. But we hope to be able to expand the service as funds become available.”

The scheduled shuttles are also able to deviate from their planned route by as much as three-quarters of a mile, for a pickup or drop-off, with advanced notice.

In addition to helping riders make it to their jobs or to the medical appointments, “by using these shuttles there is also access to other means of public transportation,” Bassen said, “Greyhound or Amtrak.”

“Everything we do is on our website,” Bassen added, directing those interested to www.southcentraltransit.org. “You can view the or print the schedules there, but if you are new to the service, it certainly helps to phone in to our scheduling office or dispatch.” Even for those seeking to ride a public shuttle rather than using demand response, the scheduling office can help them to be in the right place, at the right time in order to get the ride to go to where they need to go.

SCT is willing to do whatever it takes to introduce people to its service too.

SCT is governed by a board of directors with representation from each of the counties served. Washington County’s representative, Dennis Cook, was also eager to have the public embrace the services SCT offered.

“It’s important for people to use this service because we don’t have another service like SCT,” Cook said. “The more riders we could get, or the more requests for rides, then we could put somebody on full-time.”

Washington County does have a driver working for SCT who lives in the area, Larry Harrison of Nashville. Harrison is limited not by his own availability but by the amount of rides needed within the area.

In August of 2016, there were 600 adult riders that used the public shuttle service, and about 800 riders total in Washington County. Altogether though, “there were roughly 44,000 people that used our service across our six counties,” Bassen said.

More use of the service in Washington County, “would be a of great benefit, said Cook. “All we need is growth in the number of transportations, and we could go full time. Even now, I’ve been on the board for 13 years and this is the first time we’ve had this kind of service here.”

For more information on SCT, head to www.southcentraltransit.org, or call (800) 660-7433 to schedule a ride. For a printable schedule of the “Yankees” route which heads through Nashville, go to https://goo.gl/duKvwt

SCT is considered a municipality which gets funding from State and local governments. They are run by Managing Director Sheila Niederhofer and a board of directors which represents the six counties served by SCT. October marks SCT’s 27th year in operation.