The Eagles soccer team was not expected to walk away with the Class 2, District 9 championship as they have at times in the past.

However, that is exactly what happened as the Eagles, 17-6-2, totally dominated the Father Tolton Trailblazers in a 3-0 championship win.

That’s right – the same Trailblazers team that raced around the field and defeated the Eagles 1-0 a week ago. That team was completely bottled up by a SoBoCo team which had been having plenty of trouble scoring in recent weeks.

Not on Thursday night.

The Eagles got an early goal from Ian McCluskey on a terrific lead pass by Sam Bonderer, then got a second goal from freshman Rece Gilmore. The Eagles nearly scored twice more in the first half as they pressured the Tolton goal. The Trailblazers in one instance were unable to clear the ball and had a volley go off a defender’s leg, hitting the post nearly resulting in an own goal. Towards the end of the half, McCluskey caught the Trailblazers flat-footed and raced towards goal in an one-on-one attempt, however, McCluskey’s shot was mis-hit and SoBoCo’s Nolan Groseclose narrowly missed tapping in the errant shot.

Up 2-0 at the beginning of the second half, Eagles fans were waiting on a big offensive push from Tolton and the Trailblazers attempted to run right at the Eagles, move a third player forward and another player towards the midfield. However, the Eagles defense was more than equal to the task and never gave the Trailblazers a solid shot inside of 20 yards the entire half.

Despite have five corner kicks and two direct kicks inside of 25 yards in the second half (to none for Tolton) the Eagles could not extend their lead until McCluskey perfectly lofted a pass inside the box which Gilmore headed into the net for a 3-0 lead with 9:37 left.

It was a beautiful goal – the type that the Eagles team of last year scored often. While goals have not come in bushels for the Eagles this season, Gilmore’s score put the final nail in the Tolton coffin and ended their season.

Coach Chris Miller credited his players and noted the play of defender Ethan Blackburn, who did not play due to injury in the first contest with Tolton.

“Ethan and Sam (Salmons) played a very good game as did Ivan Bossert on defense,” Miller said. “We have played good defense all year and those guys – and (goalie) Hugh Keene played very well tonight.”

McCluskey said the group of Eagles seniors think this year’s title is a little more special as there was a bigger challenge to win the trophy. But he also dished credit to the coaching staff.

“We watched the film from the first game with Tolton and came out with a plan. All of the coaches worked with us and we executed coach Miller’s plan,” McCluskey said.

The Eagles will face Boonville in the Sectional game on Saturday, Oct. 25 in Boonville at 6pm. The Eagles defeated the Pirates 1-0 earlier this year. 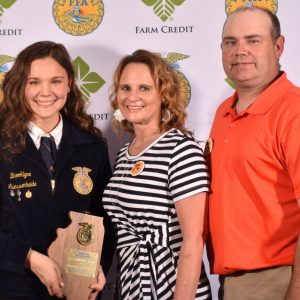