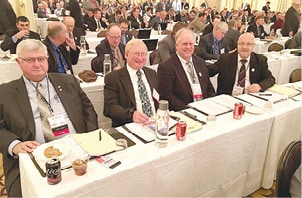 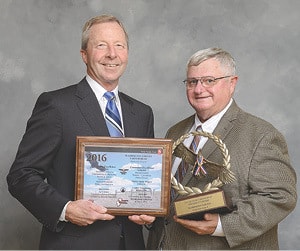 Washington CFB won the organization’s top honor for outstanding programs in its membership category, garnering six (6) “Gold Stars” and three (3) “Silver Stars” in the different program areas within the Farm Bureau organization. The President’s Award recognizes county Farm Bureaus for excelling in Farm Bureau activities throughout the year, and the county must accumulate a minimum number of points based on rankings in each program award area. Other recipients included: Edwards, Knox, Bureau, and Champaign County Farm Bureaus.

In committee awards competition, the Washington CFB received “Gold Stars” for the Prime Timer, Women’s, and Young Leader Committees, and Manager Brad Conant was also recognized on stage as the recipient of the “Friend of Young Leaders” award for Membership Group II.

Washington County also received recognition for continuous growth in its voting membership since 2013, received a “Gold Star” for its Multi-County Project efforts (working with other CFB’s), and a “Bronze Star” for the work of the organization’s charitable Foundation.

The Washington County Farm Bureau also accepted awards for two of their activities that were designated as “Most Outstanding Projects” in their respective program areas. The Young Leader Committee’s “Auxiliary Lighting for Farm Equipment” project won the award in the Health & Safety program area, while the organization’s survey and TV drawing during the CFB Annual Meeting won the award in the Policy Development program area.

It was another successful year for your Washington CFB, and we thank all of our leaders, volunteers, and members for their dedication to our organization!

The Illinois Farm Bureau is a member of the American Farm Bureau Federation, a national organization of farmers and ranchers. Founded in 1916, IFB is a non-profit, membership organization controlled by farmers who join through their county Farm Bureau. IFB represents three out of every four Illinois farmers.

What Should I Do With The Christmas Tree?Master Gardener Scoop – December 28, 2016