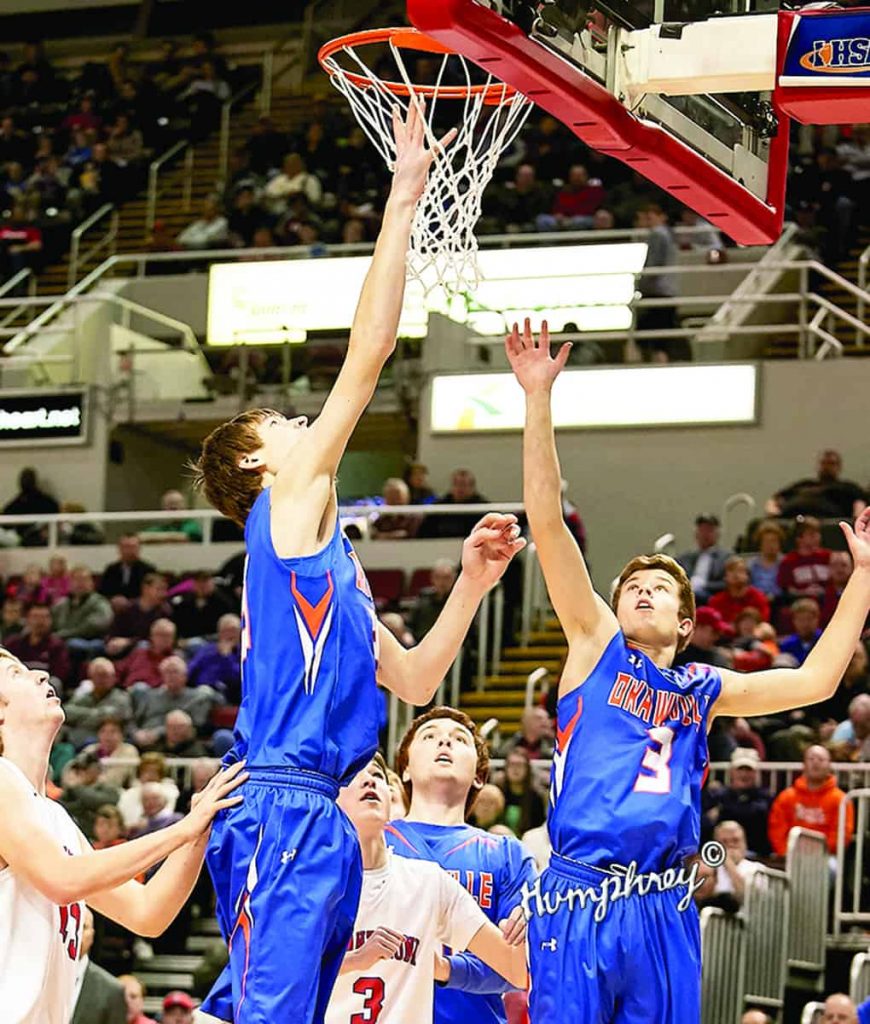 Action under the rim.

ockets players gather round the Runner-Up trophy as its held up by senior Noah Frederking. 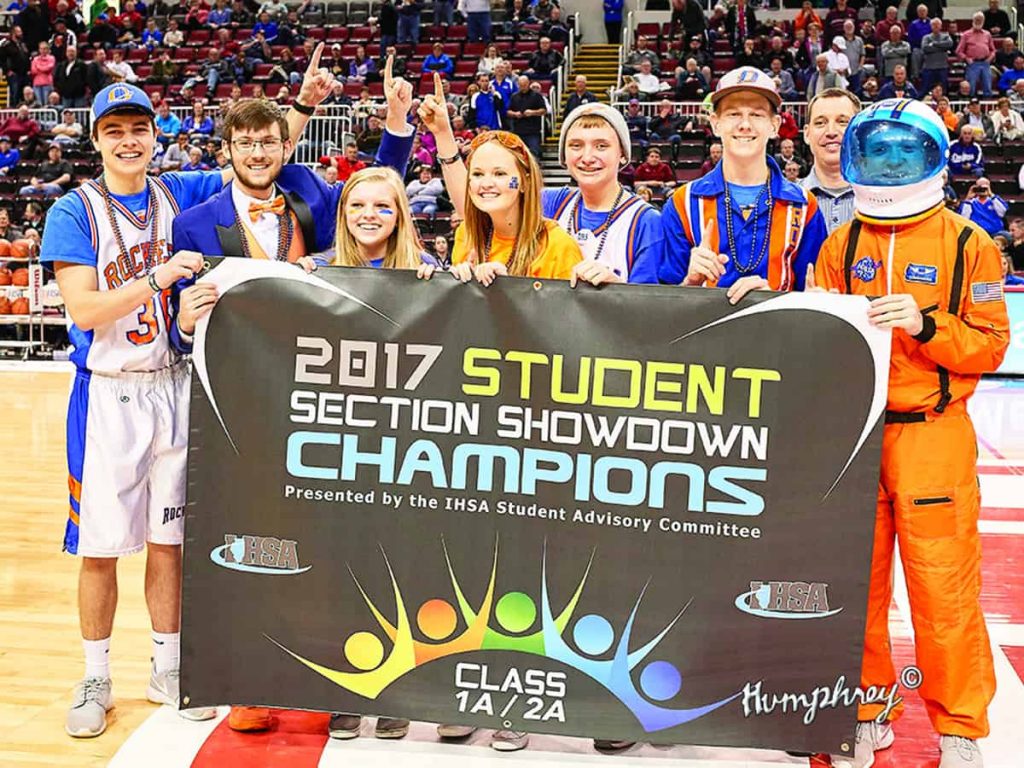 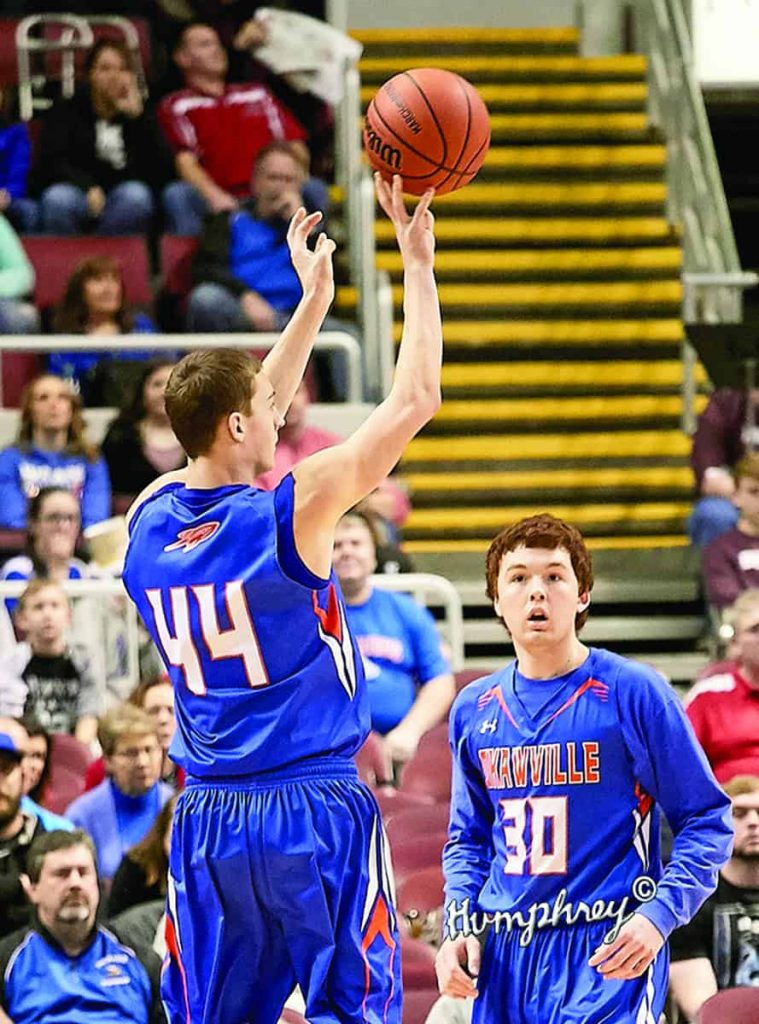 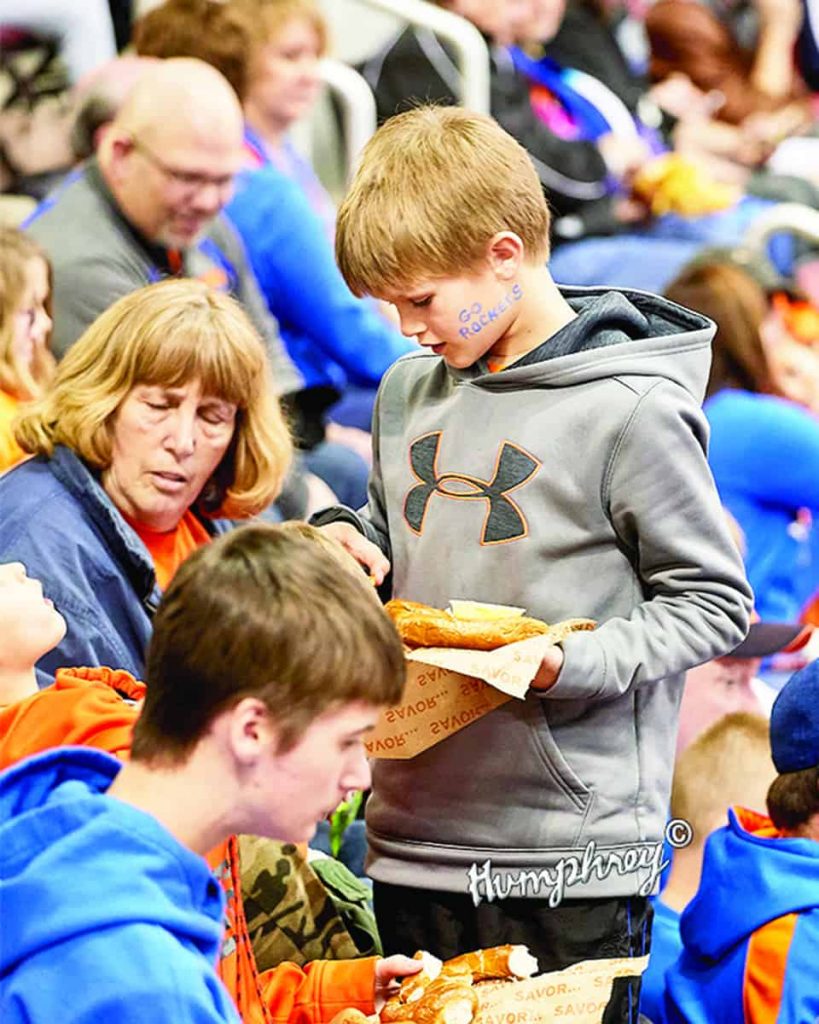 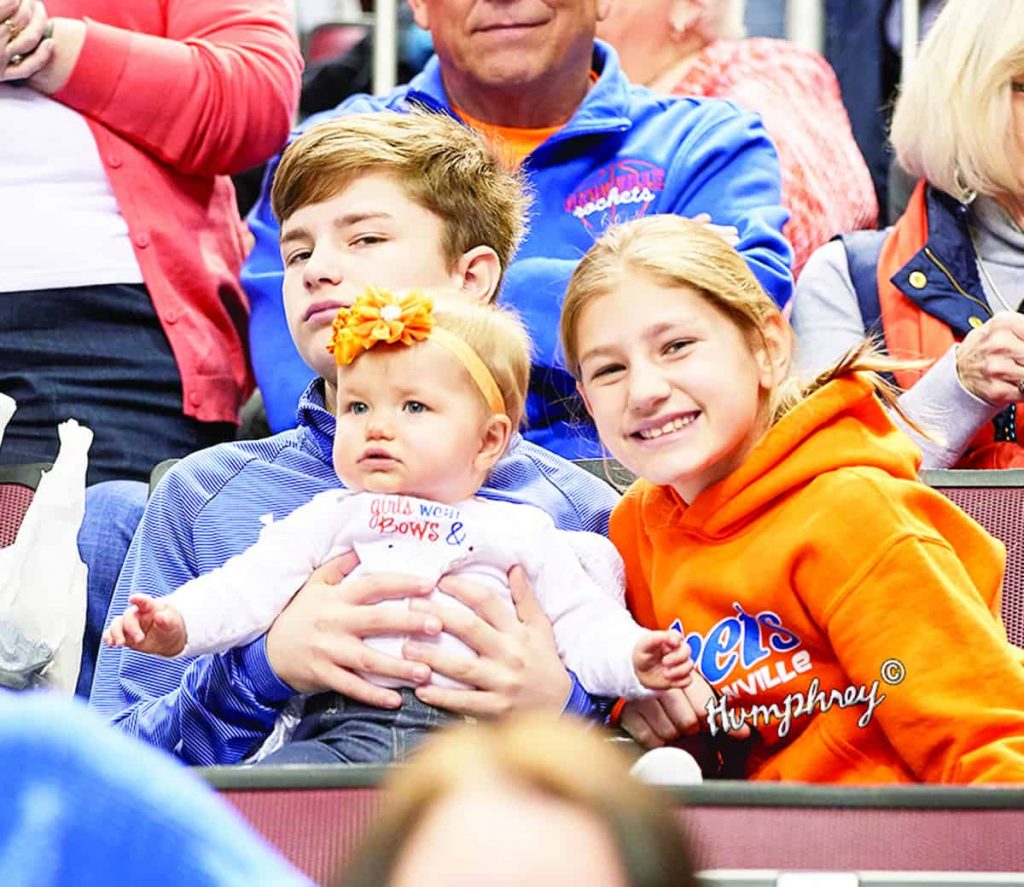 very little Rockets fan gets boosted for a better view. 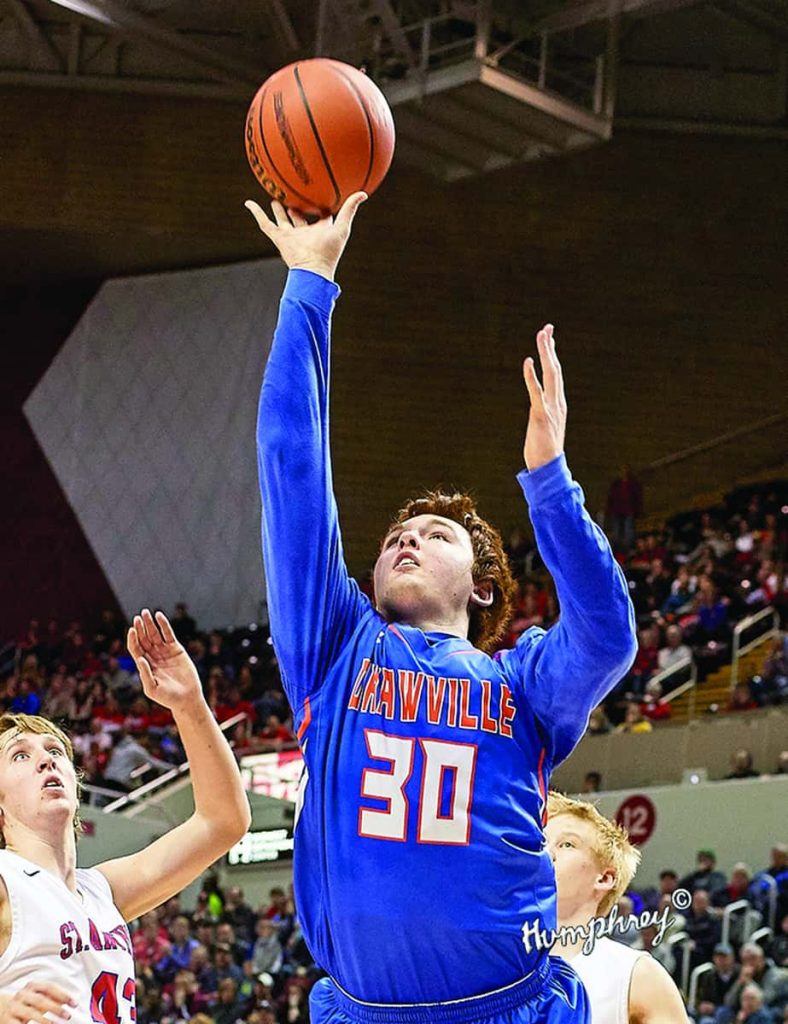 Noah Frederking finished his career as the all-time leading scorer at OHS. 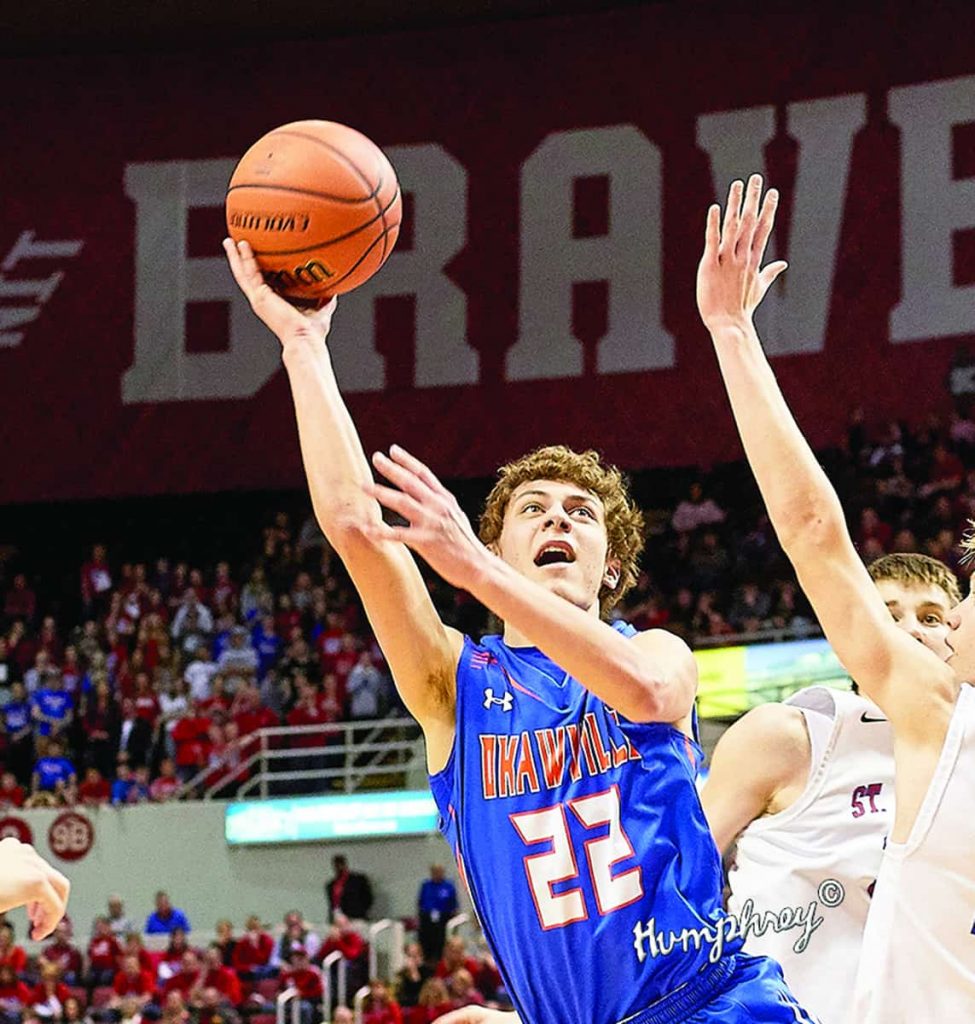 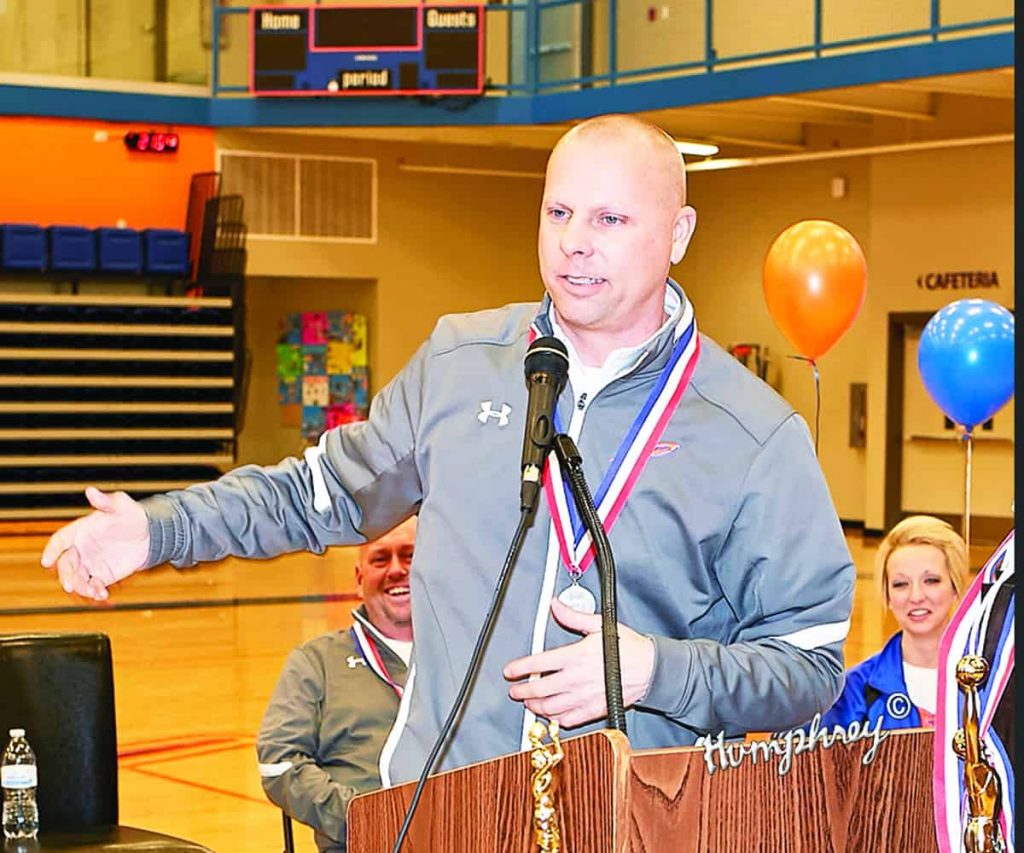 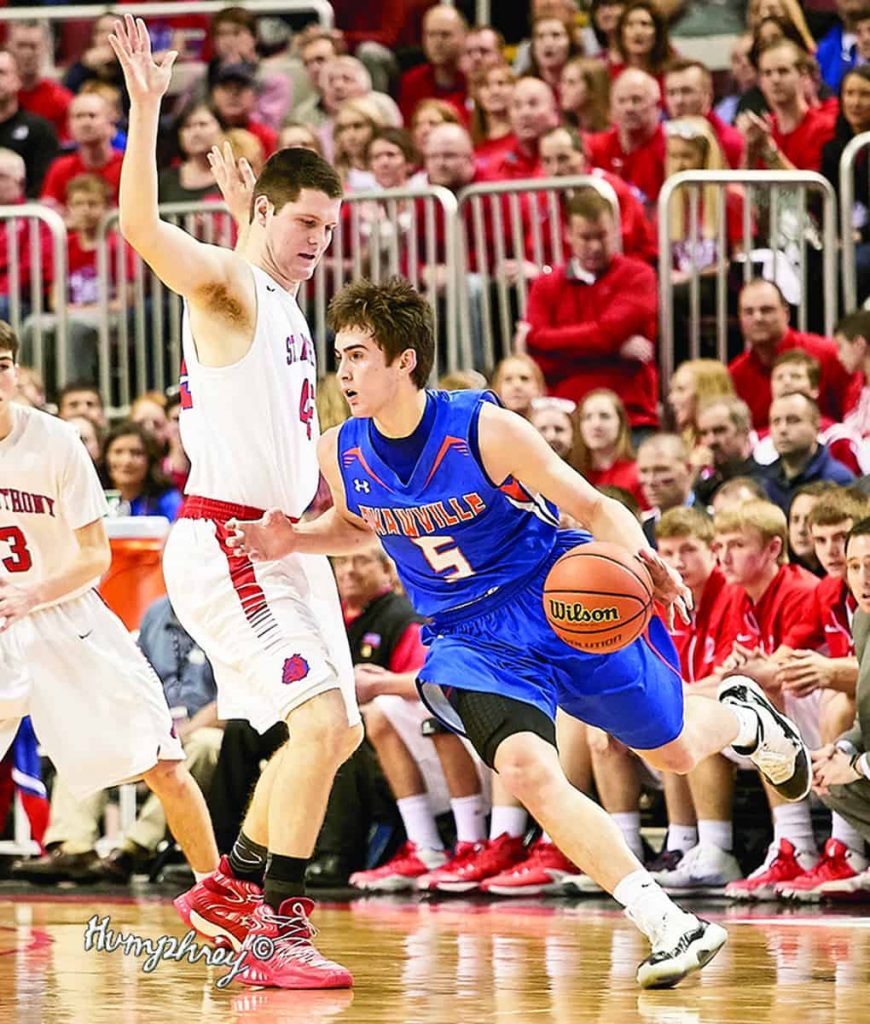 Caleb Frederking dribbles around a Bulldog defender during the IHSA Class 1A State Championship Game on Saturday March 11. 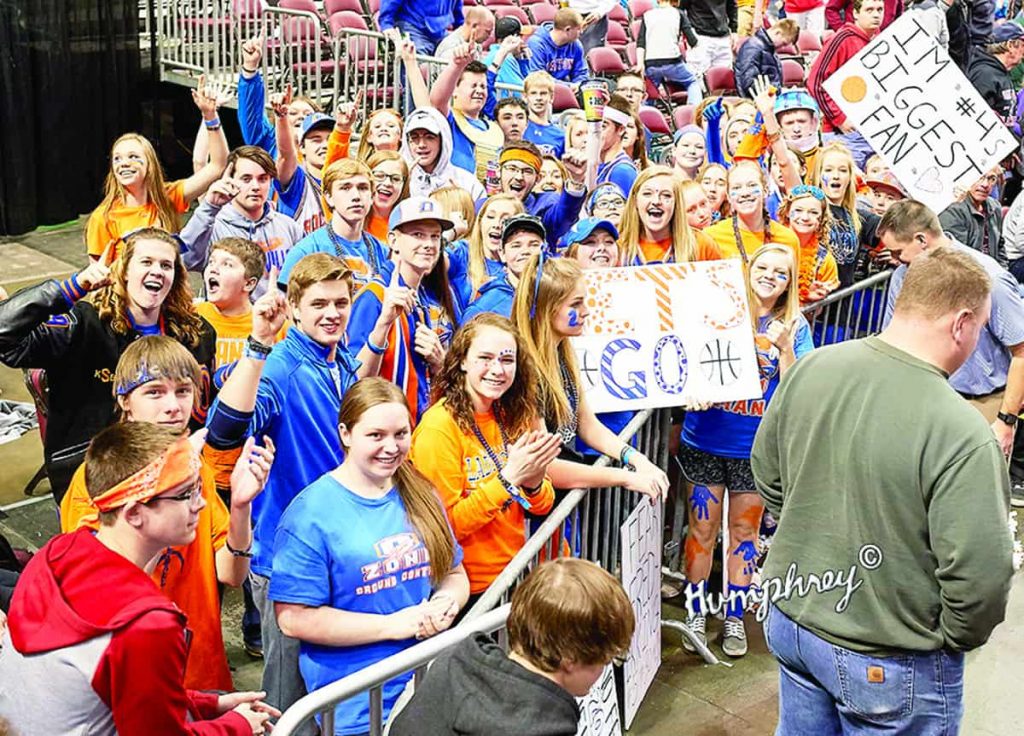 Okawville fans wait to see the team make their way into the venue. 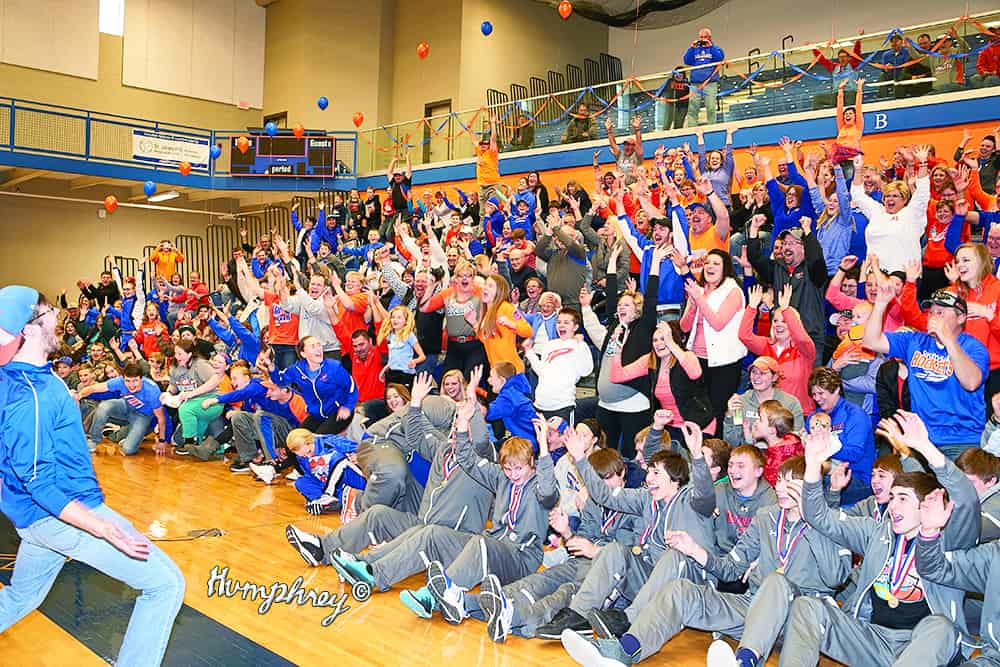 Rockets fans go wild at a reception held at the O-Rena on Sunday afternoon at 2 p.m.

For the first time in 30 years, the Okawville Rockets boys basketball team brought home a trophy from the State Tournament. After beating Newark 63-48 in the IHSA Class 1A Semi-Finals, the Rockets suffered a heartbreaking 49-46 loss in overtime to St. Anthony Effingham. The Rockets finished the season with a record of 32-4.

The Rockets advanced to the State Tournament by ending a five game Super-Sectional losing streak when they defeated Mendon Unity 46-40 on March 7. The Rockets were led in the Super Sectional win by First-Team All State senior Noah Frederking who finished with 16 points. Shane Ganz added 10 points in the win.

The Rockets win over Mendon Unity set up a State Semi-Final against Newark at Carver Arena in Peoria on March 10. The Rockets got off to a fast start in this game as they rushed out to a 12-4 lead after the first quarter of play. The Rockets would not be done as they were able to extend their lead to fourteen points multiple times in the second quarter. The Rockets led 22-8 with 3:10 remaining in the game, but Newark was able to chip away and cut the Okawville lead to 24-15 at the halftime break.

After the break, Newark would get as close as six on a jumper by Dylan Patrick, but could not cut the lead any closer. The Rockets quickly went on a 9-0 run to stretch the lead back up to 15.

With four seconds left in the third, Cameron Myre knocked down a three pointer to cut the Rockets lead to 42-30 with one quarter left to play.

In the fourth, Newark was never able to cut into Okawville’s lead, as the Rockets continued to extend their lead. The Rockets lead would grow to as many 20 late, and the Rockets advanced to the State Championship with a 63-48 win.

The Rockets finished with two players in double figures, as Noah Frederking led all scorers with 24 points and 11 rebounds in the game. Ganz also was in double figures with 17 points. Caleb Frederking added eight points, to go along with a team-high five assists. Kirklen Meyer added six points while Payten Harre scored four points to round out the scoring.

The win over Newark sealed a place in the Rockets first state Championship game since 1987. The Rockets would face off against another Southern Illinois team in St. Anthony Effingham, who defeated Chicago Hope Academy 43-34 in the semi-final.

The Bulldogs of St. Anthony got off to a quick start as they rushed out to a 6-0 lead over the Rockets early in the first quarter. The Rockets would fight back with a 8-2 run to tie the game at 8, but St. Anthony would come back with a 9-0 run to end the first, taking a 17-8 lead into the second quarter.

In the second, St. Anthony’s lead would reach 11 early on a layup by Alex Beesley, but again the Rockets would fight back. The Rockets would cut it to six late in the first half, but a free throw by Drew Gibson would give the Bulldogs a 23-16 halftime lead.

After the break, the Rockets came out on fire, quickly cutting the St. Anthony led down to three on two straight baskets from Noah Frederking, but again St. Anthony would answer with a run of their own, building back a 10 point lead with 2:20 left in the third quarter. A late three pointer by Noah Frederking got the Rockets back within single digits with one quarter to play. Okawville trailed 32-25 as the teams headed to the fourth.

After a three pointer on the Bulldogs first possession of the fourth by Alex Deters, the Rockets looked to Noah Frederking. Noah would score eight straight points in the game to cut the St. Anthony lead down to two points. After a three pointer from Harre, the Rockets would take their first lead of the game with 1:58 left in the game on a bucket by Noah Frederking. Gibson would give the Bulldogs back the lead, but a free throw by Frederking would tie the game back and send the teams to overtime.

In the extra period, the Rockets would grab their largest lead of the game on a three pointer by Luke Hensler. The two teams would battle back and forth as the each team made baskets in the final minute. The Rockets would get a layup by Caleb Frederking with 52 seconds left to go up 46-45, but coming back down the court, Gibson hit a tough off balance shot to put the Bulldogs back up by one.

With 12 seconds left the Rockets had once last chance. As the Rockets looked for the final shot, Okawville was fouled and would go to the free throw line. The Rockets could not convert, and a quick foul sent Gibson back to the line. Two free throws later the Rockets found themselves down by three with three seconds left. The Rockets were able to go the length of the floor, but a last attempt from behind the arc, clanked off the front of the rim.

After the game, Coach Jon Kraus talked about his team. “Our guys aren’t going to quit, they’re going to play, they’ve done it all season long. You saw a lot of guts and a lot heart out of this basketball team. We just came up a little bit short. That’s how things go sometimes.”

The Rockets were led by Noah Frederking with 26 points in the contest, as he finished his career with just over 2,800 career points, which puts him just outside the top ten in IHSA history. Ganz added nine points, followed by Henler with six points. Harre scored three off the bench, and Caleb Frederking scored two points to round out the scoring.