The event I held near Veterans Day every year to introduce students to heroes in their communities: first, first responders, next veterans, and this year, teachers and priests. Gegotek was speaking to these students with Fr. Dale Maxfield and retired St. Ann School teacher Rosemary Gogolek.

“Many things can change,” Gegotek continued. “I didn’t want to be a Priest when I was your age, or even older. I wanted to fly.”

Fr. Gegotek did find himself in planes – he pulls a used-but-cared-for aviator’s helmet from an olive drab equipment bag. Across the top of the white helmet is a red cross and the word, “CHAPLAIN”. 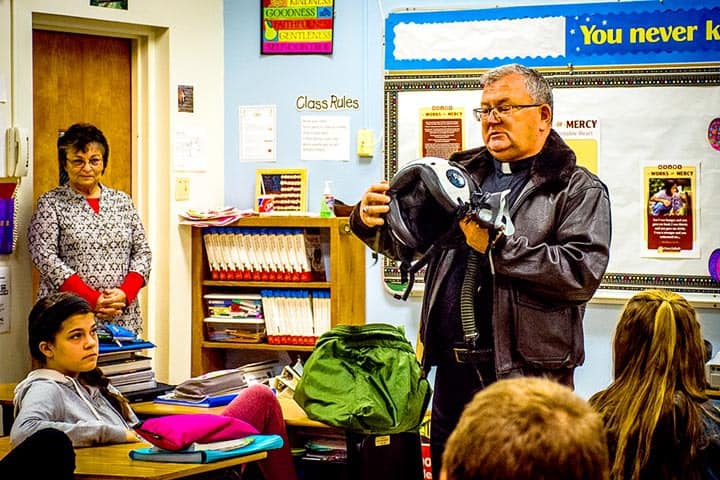 Father Tad Gegotek was one of the priests present at St. Ann School on Friday, November 10. He showed students his flight helmet from when he was a chaplain in the Navy, flying from ship to ship on “Holy Heloes” to give mass to sailors. Speaking to the seventh and eighth grade students with Gegotek was Fr. Dale Maxfield and Rosemary Gogolek, LEFT, who taught at St. Ann School.

“21 years I was in the Navy, and I loved it,” he said. He spoke about flying on “Holy Heloes,” helicopters that would take him from ship to ship in a carrier strike group, so that he could give mass to those who wanted to receive it on each of the ships.

Gegotek said that students should be open to new experiences, and said that if they “want to do many things, the door is open to you.”

Maxfield spoke about a time early in his own faith/vocational journey, and how h was speaking to an older Priest about how excited he was, how he wanted to emulate those who had come before him, “How I wanted to be just like St. Francis,” Maxfield said.

Gogolek got to speak a little more informally with the students – because these are some of the older students in the school, some of them had Mrs. Gogolek as their teacher.
Gogolek taught at the school, got tired of it, bought and ran Gutzler’s Donut Shop, “but the hours you work,” she said, “they take a toll on you.”

“I went back to teaching,” Gogolek said, “and I found that I really love being around you guys.”

“We love you too!” said Evan Kujawa to Gogolek, enthusiastically.

Gogolek spoke, like both Fathers Maxfield and Gegotek, about the strange paths that fate and faith can put you on.

Gogolek spoke about how one of her students, Matthew Klaybor, had tried to come to her aid after she had fallen in the gym. Klaybor’s attitude, his helpfulness, his caring spirit,” was the reason that I stayed teaching,” Gogolek said to the students.

St. Ann School Principal Pierre Antoine said that Lunch with a Hero will feature First Responders being invited back again for next year’s event, and he hopes that it will keep going into the future.

“We want to thank the priests, teachers and administrators who have made Catholic education in Washington County so strong,” said Antoine, “these people have made it what it is.”