By Will Summers,
Master Gardener

Cool fall weather has arrived and with it so has the encroachment of lady bugs into our homes. Regrettably, these insects are not ordinary ladybugs but another insect, Asian beetles, Harmonia axyridis, released by the US Department of Agriculture in the late 1970’s. Our population of beetles originates from a release in Louisiana in 1988. Large quantities of beetles now swarm, seeking shelter into our homes, garages and sheds. Asian ladybugs originate from Japan and parts of continental Asia. In their homeland, Asian beetles inhabit forests and orchards, but here they are found in cropland, especially soybean fields, gardens and home landscapes, as well as forests.

This insect is sometimes called “18-Spot Beetle”. In America, Asian beetles may also be called the “Halloween Beetle” because of its markings and because they visit homes around Halloween! They are also called Multicolored Asian Beetle due to their many different color combinations.

Asian beetles create a nuisance in our homes by leaving smelly, yellow stains on our walls, curtains and furniture when disturbed. They may even bite when handled. The yellow stain leaves behind a bad smell, part of this animal’s defense mechanism. Contact with this ladybug can cause allergic reactions and even skin irritations.

Asian beetles closely resemble our native ladybug in many ways. They are larger than any domestic ladybug, and are a yellowish-orange or a mustard color of red. Asian beetles have a white area just behind the eyes that our local ladybugs lack. Also, black markings between the head and wing covers resemble the letter “M” or “W”. 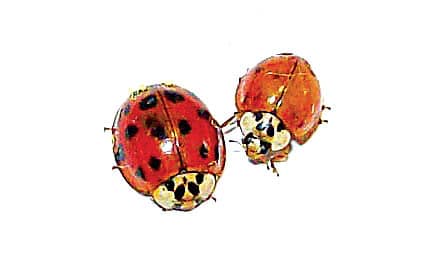 Theories have it that the spots on all ladybugs serve to ward off predators by mimicking predator eyes. Female Asian beetles have more black spots than the smaller males.

Asian beetles lay up to twenty upright eggs on the underside of low growing foliage in fields, gardens and woods. The eggs hatch in about three to ten days depending on the temperature. Young beetles are orange and black larvae that resemble small, spiked reptiles. This “crawler”-stage lasts approximately two weeks while the larvae feast on a continuous diet of aphids. In two weeks, the last molt brings the young beetle into adult stage. Full grown adults eat a daily diet of hundreds of aphids, until time to seek winter shelter. Asian beetles have multiple generations each year. Adults may live more than a year and some captive Asian beetles have survived up to three years.

This year’s population seems smaller than in recent years. Asian beetles seek shelter once temperatures turn cold and after the soybeans are harvested.

If you find one in your home, do your best to capture it, without leaving a stain on walls and dispose of it outside as soon as possible. If left undisturbed, adults beetles release a pheromone scent attracting more beetles to over-winter. Large quantities of beetles may be easily vacuumed, but take care to immediately dump the cleaner bag outside or the insects will escape back into your home, or their scent will draw more lady beetles inside. They are also attracted to areas of previous infestations due to the persistence of this smell.

The reputation of this insect is not all bad. During their life cycle, Asian beetles eat large quantities of plant damaging insects such as aphids, mites and scales. This alone qualifies the Asian beetle into the category of beneficial insects. However, these insects are considered one of the most invasive insects and are now common worldwide to the endangerment of native insect populations.

To prevent becoming a victim of this uninvited guest, take measures now to seal all cracks around doors and windows. This includes basements, crawl spaces and attics where infestations may go unnoticed. Ultimately, these insects are beneficial and use of poisons or insecticides is not recommended.

During the coming months, look for clusters of Asian beetles on warm, sunny days on the south side of light-colored buildings. You will encounter them in the woods clustered about the base of rotting stumps, hollow logs or animal burrows.

For answers to all gardening questions, please contact your local University of Illinois Master Gardener, or your County Extension Office.