The Nashville Friends of the Library are pleased to present a talk titled “Gravemarkers in Southern Illinois – The Migration of the Necked Discoid Gravemarker”, given by Michael J. McNerney, at 1 p.m., on Saturday, December 9, at the Library.

He has been fascinated with and studying gravemarker and cemetery styles for more than 20 years now, and is the author of a book on the gravemarkers which are to be featured in the talk.

McNerney had no idea what a strange journey was beginning years ago when he and friend Herb Meyer found a strange tombstone in a Pope County cemetery.

But curiosity about people, their migrations and their artifacts comes naturally to McNerney.

“As an archaeologist I’m interested in human migration and distribution of artifacts,” he told an audience Sunday at the Gen. John A. Logan Museum in Murphysboro. His talk was the first of a series of events planned around the museum’s new exhibit, “Gone But Not Forgotten: The Power of Cemeteries.” The exhibit will run through Nov. 15 at the museum, 1613 Edith St.

The odd tombstone in Pope County, in a cemetery near Eddyville, was shaped like a flat human effigy, with a rounded head and a distinct neck atop the square marker. The two wrote about it in a book they published on Pope County cemeteries.

Newspapers wrote about their finds; The Associated Press writer in Carbondale picked up the story, which ran across the coun-try. Since then, McNerney has learned about many more of the odd grave markers.

“When the AP ran the story, I got a call from North Carolina,” he said. Then calls began coming in from throughout the upland South – Virginia, the Carolinas, Tennessee and Kentucky.

A Texas woman called; she had been seeking information on an ancestor and found his name and birth and death dates on the list of Pope County burials.

In Tennessee, after hiking more than two miles with a volunteer guide and “killing a copperhead,” he found a marker with a distinct neck, abbreviated arms, even a waist.

To date, he now has located around 450 markers, 225 of them with death dates that are legible. They are marking graves in 65 counties in 10 states, and a number in Northern Ireland, Scotland, and the Basque region of Spain, McNerney said, adding “the numbers are always changing.”

The earliest effigy stones are from the 1700s; the most recent was found in East Tennessee on the grave of someone who died in 1972. “It’s made of thin sandstone,” he said.

Sandstone is a good material for the markers, he said, because unlike marble, it doesn’t react to the acid in the atmosphere. Many marble markers are eroded and covered with lichens that make it impossible to read the dates.

McNerney is working on a book to both describe the types of effigy stones and to trace their distribution. He has a title: “A Shape in Time and Space: Tracking the Necked Discoid Grave Marker,” but hasn’t finished the book, partly because he keeps hearing about more of the odd markers. “I’ve got about four or five books here that I could write,” he said, about the curious headstones and their distribution.

Ever the scientist, he’s classified the tombstones into rough categories and included sketches or photos of each. Some have straight shoulders, for instance, while others slope up or down. Some of the shoulders even boast decorative knobs. Similarly, he’s found one stone with a pointed head, another with rude earlike knobs on the head. Another shows a definite waistline in the body.

Family and personal preference, not religious considerations, determined the style of the headstones, McNerney said.

“Many Southern Illinois families followed the same paths of migration as the gravestones,” he said. At first, in searching for the stones, he and Meyer, a retired Southern Illinois University professor and historian, followed those routes back to the western Appalachian region. Later, he followed the tips provided by both friends and strangers.

And sometimes, simple serendipity came into play. McNerney and Meyer nearly passed by one graveyard at Enfield in White County. Meyer suggested they go in. Driving past rows of modern monuments, at the very back of the cemetery they found five of the effigy stones.

The farthest north (so far, at least) McNerney has found effigy markers is in the small Illinois community of Livingston, near Marshall in Clark County. Five stones there mark gravesites of the Ferguson family. “They were millers and whisky makers,” McNerney said. “They bought land around the National Road, the big route to St. Louis.”

The markers range from rude effigies with homemade inscriptions, to those with fancy shapes and carved surfaces. One stone found near Jefferson City, Mo., depicts a dove on the discoid shape. One he found in a Baptist cemetery in Oklahoma is inscribed in the Cherokee language; he obtained a translation from an Oklahoma professor. Effigy stones in Northern Ireland include some with skull and crossbones added.

McNerney showed a slide of an East Kentucky man in overalls carving a stone with a ballpeen hammer and chisel.

He located in a probate record a receipt for work done by Union County stone carver Samuel Cruse, who was paid $7.50 to carve tombstones of a couple, John and Elizabeth Lingle. The wife was Cruse’s sister.

Some of the strange discoid “head and neck” shapes adorn the ends of grave covers, which were placed to protect gravesites from hazards like grazing cattle. Most of the covers are made of stone.

Early wooden ones have long since deteriorated, except for a few McNerney found in a family graveyard. The family members carefully restored the covers, working from photos of the originals.

The stones and their stories continue to intrigue McNerney.

“They serve as a reminder of family identity,” he said. His grandfather’s gravestone, he said, “was a stone on which he used to eat lunch when he was herding cattle.”

For more information on this, or on any other program or offering from the Nashville Public Library, contact the Library by phone at (618) 327-3827, or by email at nashvillepublib@gmail.com. 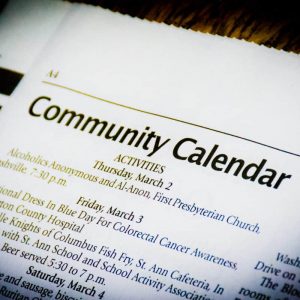