The first Barn Quilt was installed on the Charlie Meier farm in Okawville in June, 2016.

The 4H Club members involved in that barn quilt were Jacob and Avery Pisecki of Posen, Lauren Wolter, Nicole Hagen, Kierstan Lampe, and Carissa Littekin, all of Clinton County.

A selection of the barn quilts produced by the 4-H Barn Quilt Spin are shown here. To see them yourself, check out the Barn Quilt Trail, with listings below.

A new group of members were the artists on the barn quilts on the barns belonging to Dave and Karen Droste, Nashville; Gary and Deb Stricker, Okawville; Rainbow Ranch, and David and Jennifer Clary, both in Plum Hill. 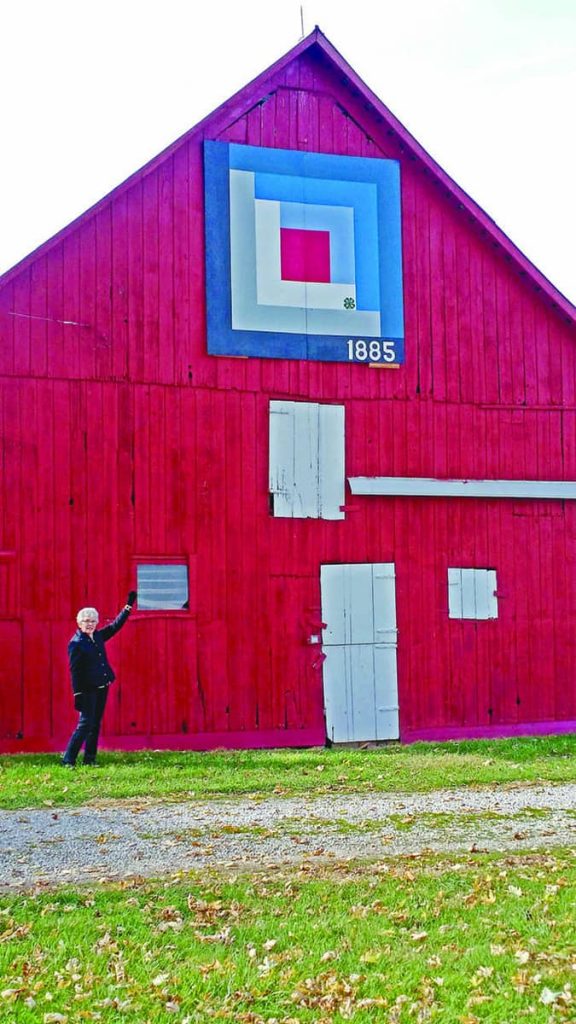 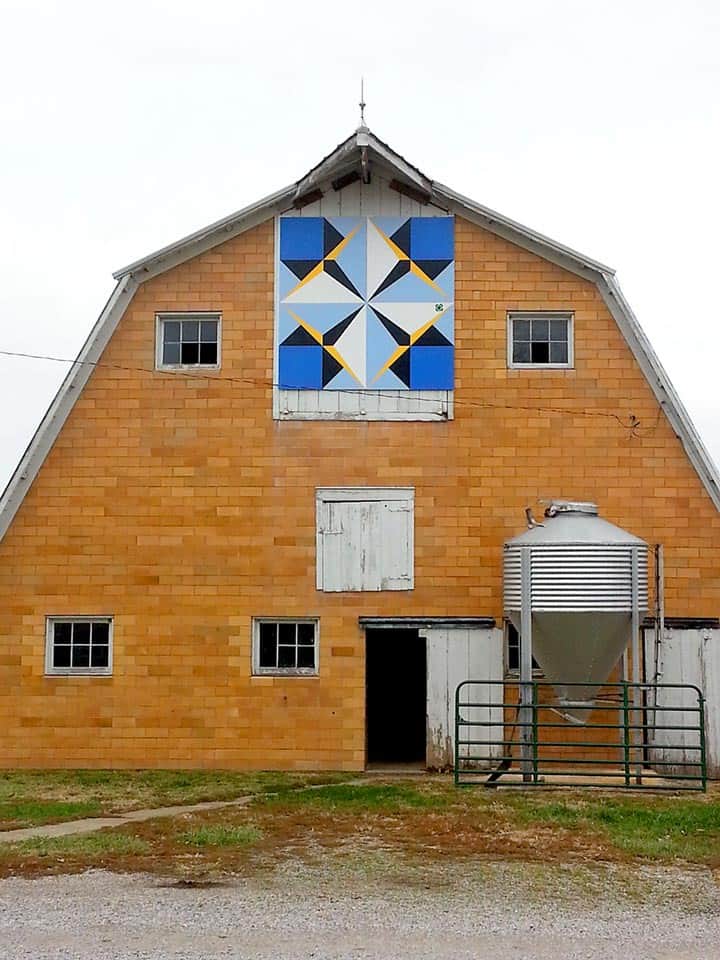 Early summer of 2017 found a smaller group of artists, Eva and Erin Tooley, Lexi Jarden, Anna Herzig, and a special guest for one evening, Michael Thole of Tennessee. 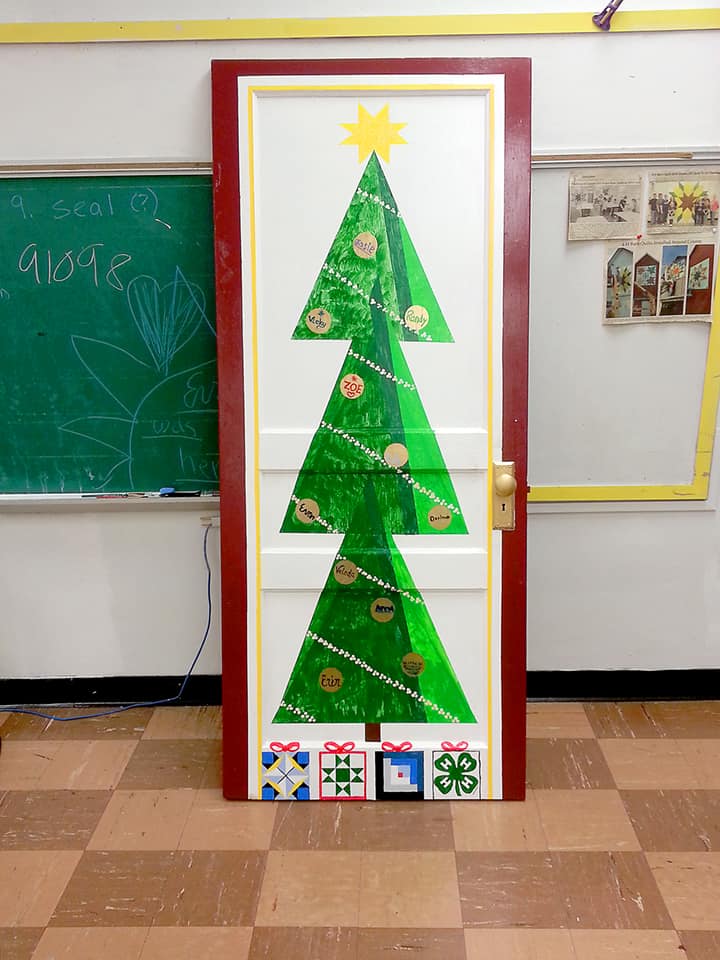 The Barn Quilts produced were one on the garage of Dave and Sara Sallee in Nashville, a 4’x4’ one for the Panzier Farm in Waltonville, and larger ones for Butch and Carol Gogolek, DuBois; the Helbig Dairy Farm north of Lively Grove and Annette Eade in downtown Okawville. 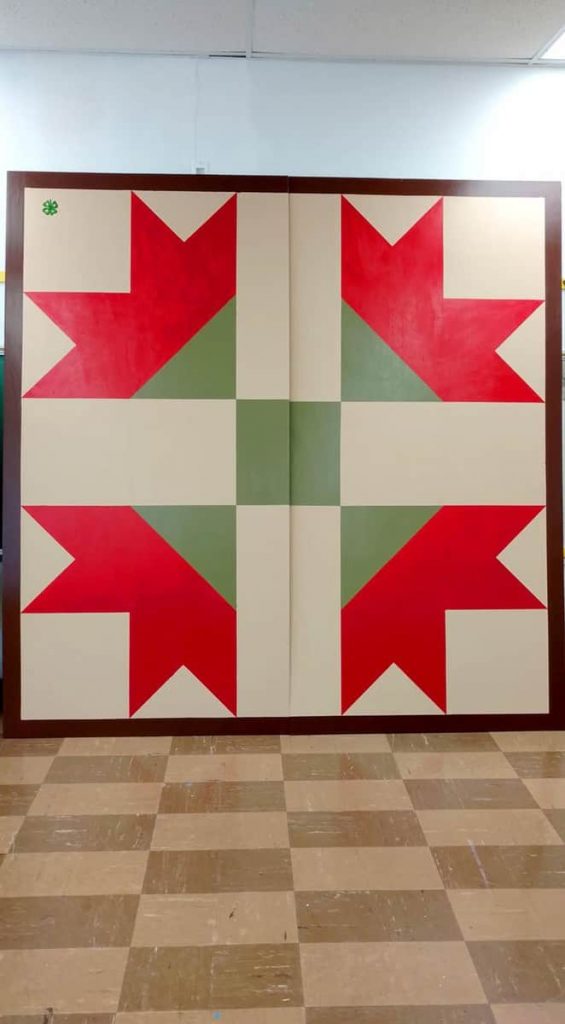 Fall barn quilts have been installed, and are the production of Josie Bronke, Zoey Kaufman, Annabelle Herzig, Meredith Anderson and Lily Helbig. 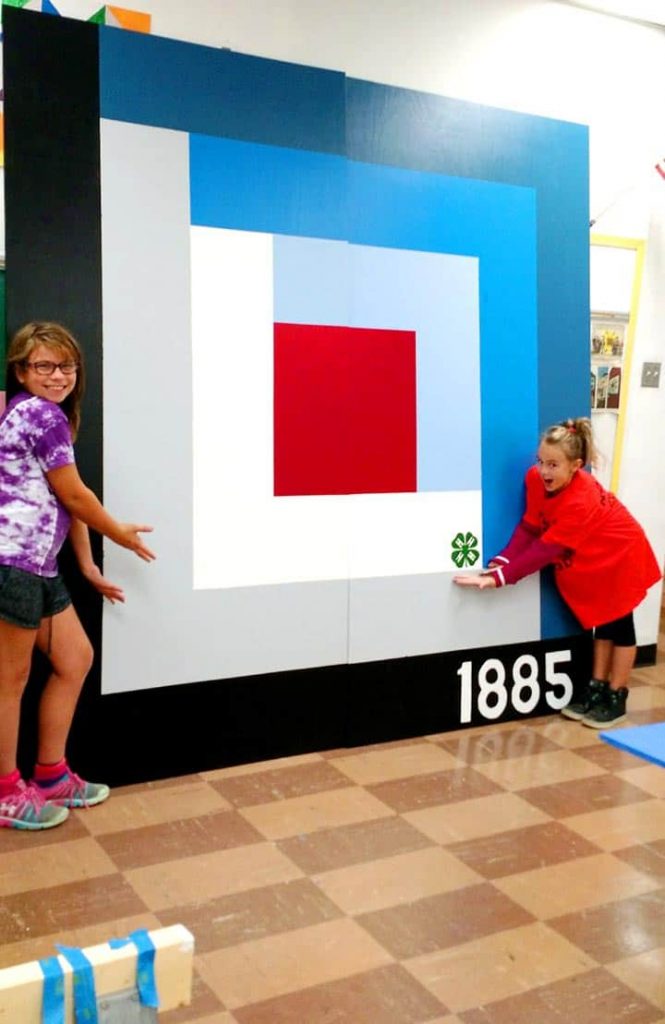 Those have been placed on farms belonging to Dave and Jewell Meyer, Nashville, and PineLake Farms north of Okawville.

A Christmas gift barn quilt was placed on BramFarms on December 9. The double wedding ring celebrates Edmund and Aline Brammeier’s 62 years of marriage and their four children are represented by the four rings.

This was all under the direction of leader Valeda Van Natta and invaluable assistants Darlene Ostendorf, Vicki Buss, Erin Tooley, and Randy Van Natta.

We would like to expressly thank the businesses and individuals that have made the continuation of this project possible: Randy Van Natta, Restoff Hardware, Kesel Hardware, Thrivent Financial, GDB and the Nashville Community Center.

1. Meier Farm. Okawville. 705 Esser Dr. Okawville – Installed Spring, 2016. A four-block 8’x8’creation of the 4H Club. One block is red, white, and blue, symbolizing Charlie Meier’s time as an Illinois Representative. One is the green 4H clover leaf, symbolizing his long-time support of 4H. One block is the colors of John Deere tractors, and one is a log cabin, bringing to rembrance the logs his great-grandmother brought to the farm to built the original barn and home.

2. David and Karen Droste Farm. 19147 Highway 15, Nashville.
Installed June, 2017. An 8’x8’ four colored leaf pattern with corn in the middle symbolic of the grain farm and David’s seed business. This pattern was chosen by vote.

*8. Vera Panzier, 5251 E Bakerville Rd, Waltonville. Vera chose the corn and beans pattern for a 4’x4’ barn quilt for her new barn. It has been delivered, but not installed, as the barn has not been built yet! It is red, black and white- IH-colors.

9. Helbig Dairy Farm, owned by Marvin and Faye Helbig. State Rt 153. This is an 8’x8’ Double Aster pattern, chosen by Valeda Van Natta. The QBS was placed on a barn on the highest point in Washington County! It is approximately 3 miles south of Rt 15. It was purchased as a surprise gift for Faye by Michelle Helbig. Installed Sept 2017.

10. Annette Eade. This 8’x8’ gorgeous rose pattern was chosen by Vicki Buss and has been placed on the north face of a building owned by Annette Eade. It sits on the corner of E High St and N Hanover St in Okawville. Purchased as another surprise gift by Alex Eade. Placement Sept 2017.

12. Pine Lake Farm 8641 Flamingo Rd, Okawville. Owned by Cora Schmidt and her sisters, the farm house, built around the original log cabin. is on the 2017 Okawville Christmas Stroll. The 8’x8’ log cabin design, chosen by Cora and her sisters, honors the year, 1885, that their great-grandfather purchased the property. The BQ was placed on a barn standing at the time of the property purchase and was installed November 2017.

13. Bram Farms. 11481 Sty Rt 177 Okawville. This 8’x8’ Double Wedding Ring was chosen by Diane and Steve Brammeier to honor the four children of Edmond and Alrene Brammeier; Steve, Stanley, Sandra and Sharon. The difficulty of all the curved pieces represent the hard work of dairy farmers. It is a Christmas gift and was placed on a 100+ year old barn at BramFarms in December 2017.