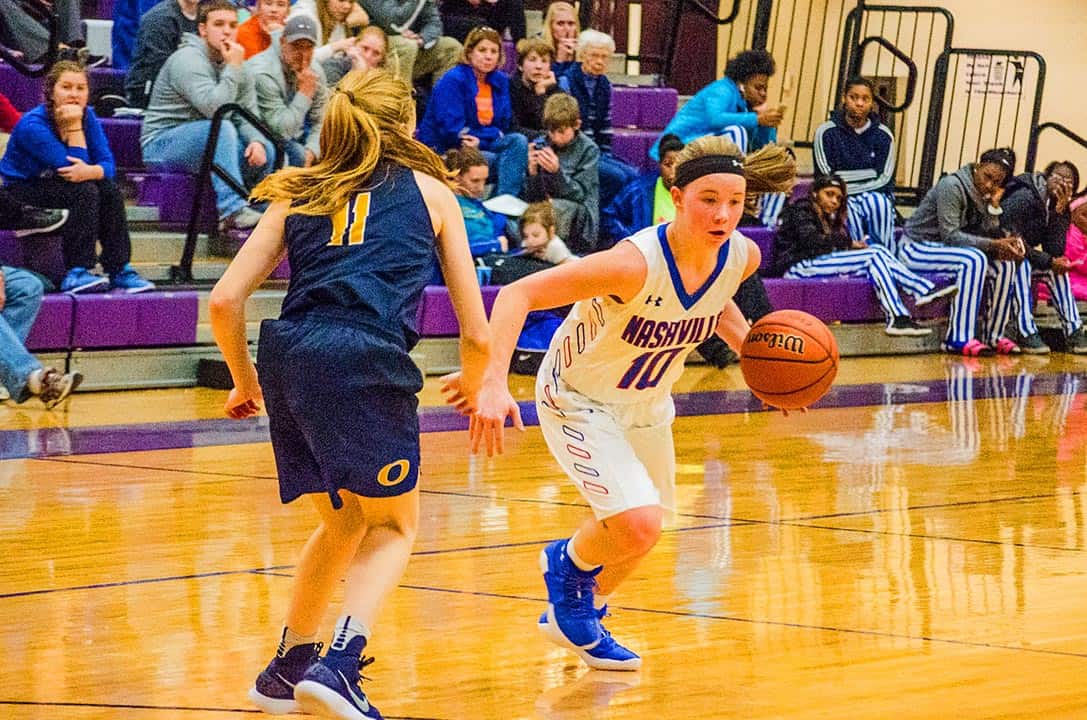 The Hornettes started off slow in their first contest of the tournament as Althoff quickly jumped out to a 19-9 lead. The Crusaders outscored the Hornettes 14-7 in the opening frame, and continued the momentum in the second quarter where they held the ten point lead. After Althoff led 19-9, the Hornettes scored the final 13 points of the first half to  take a 22-19 lead into halftime. Nashville got eight points from Libby Ahlers and five points from Paige Kasten in the second to help them storm back to take the lead. After the game Coach Doug Althoff talked about the first quarter and a half. “We looked awful rusty. Our defense wasn’t very good today, and I’ll be honest we just looked sluggish. Didn’t look like a lot of effort out there, but that got better. The second half they played a lot harder and we started to get things done that we needed to do to win.”
The Hornettes came out in the second half, and continued to play well. Nashville outscored Althoff 17-11 in the third quarter to extend their lead to 39-30 with just one quarter left to play. In the fourth, the Hornettes got a big three from Sophie Heck and put the game out of reach to get their first win of the tournament.
Coach Althoff talked about the Crusader’s defense inside. “They did a good job on Karly in there. The girl that was guarding her, did a great job on her. Karly had a hard time moving her and that’s Karly’s bread and butter. She turns and can get girls off of her, but the girl from Althoff did a good job. We hit enough threes to do what we needed to get done. Thank god Paige hit one, then Sabrina hit one, Libby hit one and Sophie hit one. We hit enough of them to counteract what they were trying to do with Karly. Going in the main thing is they are going to try and get Karly stopped.”
Kasten and Ahlers each had 17 points in the win to lead all scorers. Karly Stanowski just missed out on double digits with nine points, followed by Heck with five points. Sabrina Kollbaum scored three points in the win.

One bad quarter sank the Hornettes in their next contest, as they fell to O’Fallon 46-32. The Hornettes battled hard in the first as they kept pace with the Lady Panthers, but O’Fallon went on a run in the second quarter to take control, and the Hornettes could not recover.
O’Fallon came out of the gate quick with three early points, but a three by Paige Kasten quickly negated the Lady Panther’s lead. O’Fallon would take the lead again, at 5-3, but the Hornettes would score the next four points to take a 7-5 advantage. It was the last lead the Hornettes would have, as the Lady Panthers outscored Nashville 8-2 the rest of the first quarter to take a 13-9 lead into quarter number two.
O’Fallon came out on fire in the second quarter as they quickly extended their lead over the Hornettes. The Lady Panthers hit a three to begin the quarter to push their lead to seven points, and followed up with another bucket to put the lead at nine. Stanowski scored the only points for Nashville in the quarter, as she completed a three point play to cut the lead to six. O’Fallon would score the final nine points of the first half, and led 27-12 at the break.
The Lady Panthers continued their run into the third quarter as O’Fallon took a 31-12 lead before the Hornettes scored a bucket to end the run. O’Fallon would lead by as many as 21 in the quarter, but the Hornettes scored the final five points of the third to cut the O’Fallon lead to 35-19 with one quarter left. The final points of the third saw Stanowski unload a shot from way behind the arc that found the bottom of the net as the buzzer sounded. It was Stanowski’s first three pointer of the season.
After O’Fallon hit a three to begin the fourth, the Hornettes fought back. Nashville cut the lead to within 20 but it was too little too late, as O’Fallon would close out the win 46-32 over the Hornettes.
After the game, Althoff talked about the loss.“They got that run on us in the second quarter and that was pretty much the game. We came out in the second half and I think we actually beat them by a point. I’m not disappointed really. I thought we played hard. Like I told the girls, sometimes you have to tip your hat. They are a very good team, lets be honest here. I thought we did good. I thought we played with them for a half for sure, and a quarter. We just had that second quarter and we just couldn’t recover from it.” Althoff went on to say, “It’s a good learning game. You have to have games like that to get better. I don’t like losing. We always want to win every game, but sometimes it doesn’t work out, but at least they didn’t quit. They just kept playing and playing hard.”
Stanowski led the Hornettes with 19 points in the loss. Kasten added six points, followed by Rachael Kell with three points. Both Heck and Kollbaum each finished with two points in the loss.

The Hornettes advanced to the 5th Place game with a dominating 60-32 win over Cahokia. The Hornettes got on the board early and did not let up as they cruised to a win over the Comanches.
Nashville quickly got the lead over Cahokia with an 11-0 run to begin the game. Kell knocked down two from behind the line to give Nashville the 6-0 advantage. Cahokia cut the deficit to six before the Hornettes put their foot on the gas. The ended the first on a 12-2 run to take a commanding 23-7 lead into the second quarter.  Stanowski had 11 points in the first to lead all scorers. After the game, Althoff talked about the first quarter. “That was key, Rachael hit those two threes right off the bat and gave us a little cushion and it continued on from there. It kind of opened the inside up and Karly took over from there.”
In the second the Hornettes would push their lead to 31-7 before Cahokia scored again. The Hornettes outscored Cahokia 12-4 in the second quarter and held a 35-11 lead at the break.
In the second half, the Hornettes continued the onslaught. The Hornettes outscored Cahokia 19-10 in the third quarter to put the game away. With most of the Hornettes starters out of the game in the fourth, Cahokia outscored Nashville 11-6 in the fourth but the game was very much out of reach as the Hornettes cruised to a 60-32 win.
Coach Althoff talked about facing a zone defense “We don’t see a lot of zone. I was a little worried if we’d make shots or not. That’s the key to the zone. If you can get inside-out looks like that. Get some touches in the middle, then make those threes when you got your toes on the line., it just makes it a lot easier. I thought our defense was pretty good today too.”
Stanowski led Nashville with 23 points in the win. Ahlers added 10 points, while Kell finished with nine points. Kasten and Emily Stern each finished with six points, and Sophie Heck finished with three points to round out the scoring.

The Nashville Hornettes offense could not get anything working as the Lady Cougars defense stifled Nashville on their way to a 40-19 win in the fifth place game of the Mascoutah Invitational Girls Basketball Tournament.
The Hornettes never led in the contest, as Central took a 2-0 lead early. Nashville would tie the game at two, but could never overtake the Lady Cougars. Central finished the first on a 9-2 run to take an 11-4 lead after one quarter of play. In the second, the Lady Cougars quickly pushed their lead to 18-4 before Ahlers knocked down a basket for the Hornettes. Nashville would be outscored 9-5 in the second quarter and trailed 20-9 at the break.
In the third, the game quickly got out of hand as Central extended their lead to 30-9 midway in the third. Nashville scored just three points in the quarter, and trailed 33-12 at the end of three. In the fourth, the game was out of reach for the Hornettes. Nashville was even with Central in the fourth as each team finished with seven points in the fourth. As the final buzzer sounded, the score was 40-19 with Breese Central taking the win.
After the game, Coach Althoff talked about the loss. “They just outplayed us, plain and simple. Too many turnovers against a team like that, your chances of winning are slim. Give credit to them, their defense was pretty solid, and we just couldn’t do what we needed to do. We didn’t make shots either. We make some more shots earlier in the game it might have been a whole different deal. Again they had everything contested and it’s hard to score when somebody is in your face the whole time.”
Breese Central coach Nathan Rueter was proud of his team’s defense. “I was super proud of the way we executed on the defensive end of the floor. They have several kids who can really hurt you in a variety of ways and we did a very nice job of guarding the arc and obviously taking them out of what they wanted to do in the post. That’s a testament to not only Carson Newkirk’s
post defense, but the team’s post defense. Took direct entry away, took entry over the top away, and it was just about as good of a job as you can do in my opinion.”
Although the Hornettes lost, Coach Althoff said they accomplished one of their goals. “This tournament and Highland the goal is to play four games. Hopefully you win three of the four. Hopefully you win four of four, but if you can play four games in either one of those tournaments it’s a heck of an accomplishment, because the competition is so tough that I just feel if you play four games it’s a good thing.”
For images from the Hornettes at the Mascoutah Tournament and the Hornets at Mater Dei, look here.