Chess Night At The Library
Strategy, Learning And Family Fun

On Tuesday night, January 2, I played chess for the first time in perhaps 10 years against Rick Harris, a friend of mine who I’ve talked to for a number of different stories over the years. 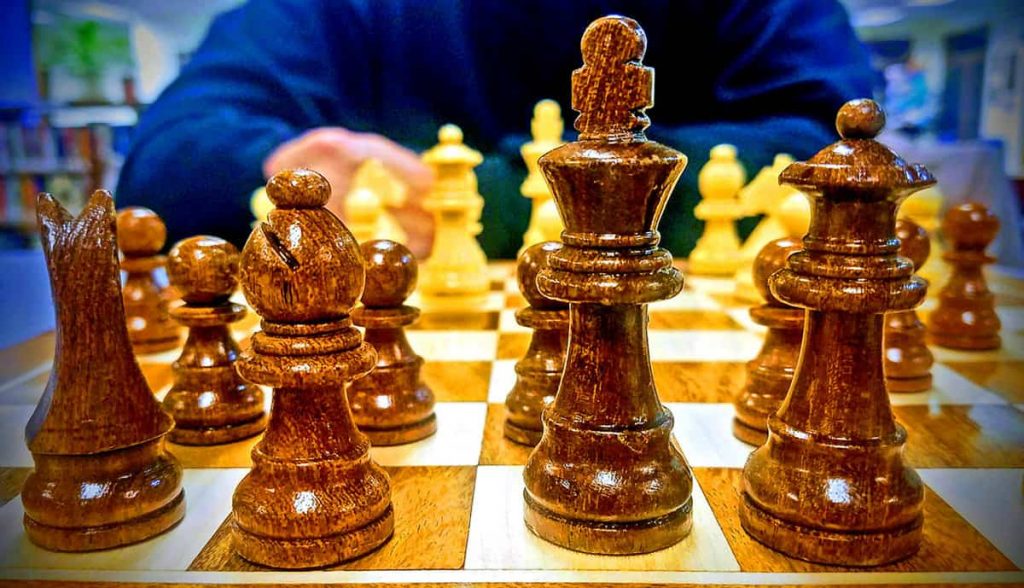 Shiny new pieces are ready for action in this chess set.

As Harris seems to have a pretty easy-going attitude most times, I am completely unprepared for how quickly and easily he beats me at the game, snapping me into checkmate in what seems like five or so moves.
The chess was being played at the Nashville Public Library, where chess nights are being held every Tuesday evening from 5 to 7 p.m. from now through the end of March.
Chess night started when Harris and Librarian Dennis Gregory were discussing the possibilities for different activities at the library and ended up playing against each other in chess, and the event blossomed from there.
“It’s done a lot better than I would have thought,” Gregory said. “It only had about four people the first night, now it’s at about 12 or 14.”
Gregory said that he believes that the chess night does well at accommodating players of varying interest and experience levels. “Rick and I have both been teaching people,” Gregory said, and stated that the people who come in also do well at teaching – and having fun playing – one another.
After Rick’s quick victory, he told me he had someone else I should try playing and asked Roman Reams, 12, if he would be willing to play me, which he was. This time, the game lasted a good bit longer and in the end, I won. Roman was there with his family and stated that I had beaten him pretty badly, but this wasn’t true – I had just gotten lucky, and I had fun.
Roman’s family included his dad, Jason; his sister, Evie, 9, who played Harris while Roman and I played, and his mother, Kristy, who is the most experienced chess player in the family. Kristy is also among the most experienced at chess night – she had played competitively in college. She did not play on Tuesday because of a busy schedule but did stop by and said she would play next week. 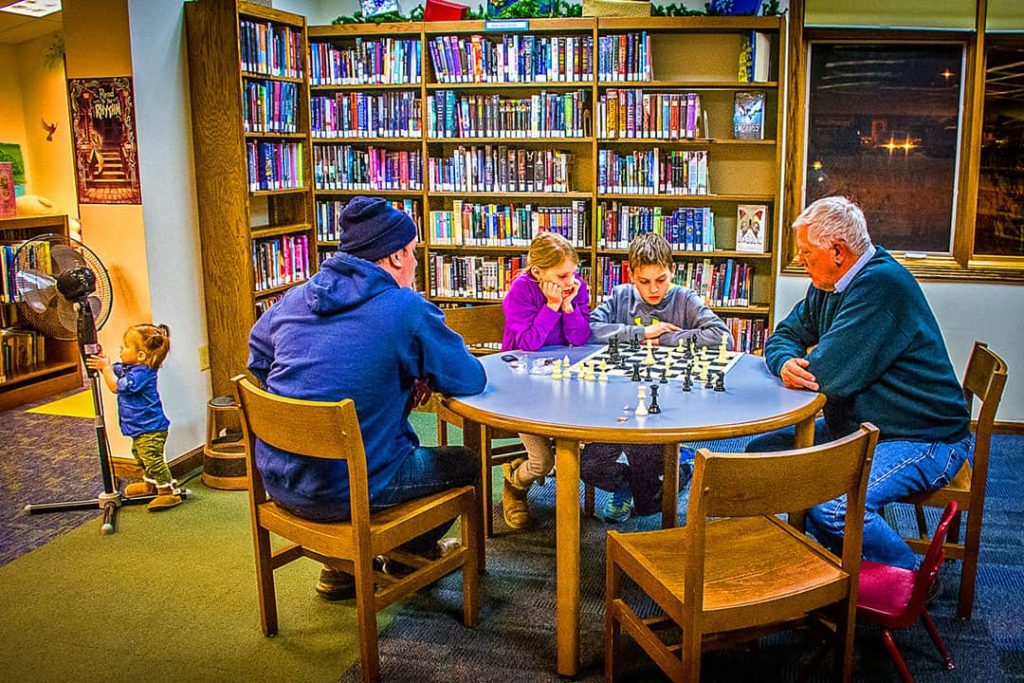 AT TABLE, Jason Reams and Roman Reams watch while Evie Reams plays a chess match against Rick Harris. LEFT, Ardyn Reams checks out a fan while her father, brother and sister watch the chess game.

Finally, Roman and Evie’s little sister, Ardyn, did not play at all, because she’s only a year old, but she was having an enjoyable time exploring around the library and being near the rest of her family.
As Roman and I had questions about how pieces move or how different rules apply, we call “coach”, to Stan Bumpas, who is sitting at the table behind us.
Stan corrects us and Harris in saying that he’s really just an assistant coach for the chess team at Mt. Vernon High School, and is a volunteer, but he is knowledgable, friendly and helpful and fields questions from many of those present that evening.
Playing chess under Bumpas’ eye were Brandyn Wilcoxen, a sophomore from Mt. Vernon, and Tristan Jack, an eight grader from Nashville. Wilcoxen had brought the board that I played Harris and Reams on, a new wooden set with magnetic pieces. 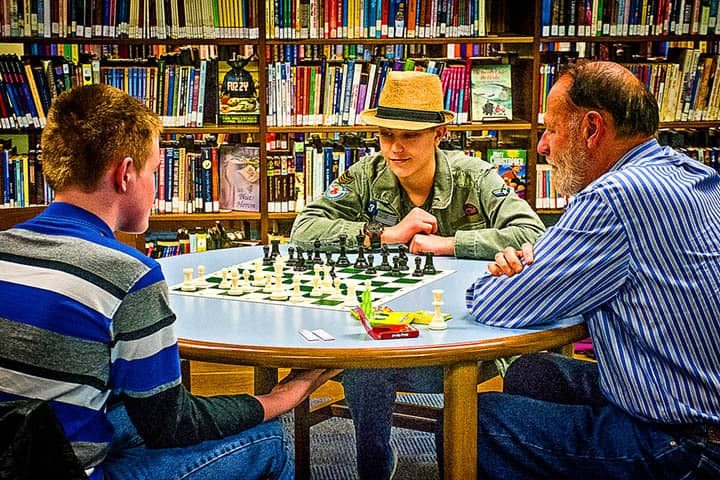 Despite Jack’s young age, he possesses a talent for the game. “He’s pretty good,” said Gregory, and out of three games played so far between them, “he’s already beat me once fair.” Another game, Gregory said he won fairly, while another went to Jack when Gregory said he played sloppily on purpose, to assess his skill level.
At the table in front of where Reams and I play, Rhonda Dahncke and Anne Brickey, who say that that they are both relative novices and that they will typically play a slow game, because if they don’t know exactly how something is going to go, they might wait or look it up, so as not to lose pieces unnecessarily – a contrast to my own style of playing to see how the various pieces will do without a huge amount of planning or foresight.
Harris said that he had first played chess in high school, but said that anything after high school, “was just fun between friends.”
“I am so rusty,” he added, which brings another level to my earlier speedy defeat.
Gregory would later laugh when I told him how surprised I was at my quick loss to Rick, saying that he wasn’t sure if he even had beat Harris fairly so far.
Harris stated that what he’s really excited about with chess night is all of the different people, at all levels of skill, who are coming out to learn and to have a great time playing too.
People of all levels of experience and interest is good because along with learning how to play and having fun doing so, Harris says another lesson about chess that people are picking up is that, “it’s not a big deal.”
“It’s not more than people playing pinochle,” Harris said. “They think it’s a smart man’s game! I wish people just weren’t so intimidated by it.”
Gregory said that he was excited that people were coming into the library for the chess nights, but that if members of the community have any event or activity that they might wish to use the library for, they should come in and talk to him.
“I usually take on new ideas,” Gregory said, “as long as I feel that we can reasonably accommodate them.”
In the past, Gregory said that he had a pair who used the library’s study rooms to play once-a-month games of Dungeons and Dragons, and “that’s kind of how the American Girl Club got started.”
That club has been going on for nearly a year now, and should continue through at least March of this year.
The Nashville Public Library has a lot to offer, without even taking the scores of books available there into consideration. The Nashville News publishes monthly notices and other updates for the library (they will be playing the three “Hobbit” movies this month), and the Library also maintains its own Facebook page and a website located at nashvillepl.com
If you’re not online and want to know what is happening at the library? Don’t fret. Stop in during business hours, 10 a.m. to 7 p.m., Monday through Friday and 10 a.m. to 2 p.m., Saturdays, and speak with Gregory or other library staffers to find out what’s happening. The library also has information on upcoming programs and events posted to their bulletin board in the entryway.
Posted in Front Page, Front Page Lead, News, Popular Stories