Karly Stanowski battles down low during the Hornettes loss to Harrisburg. 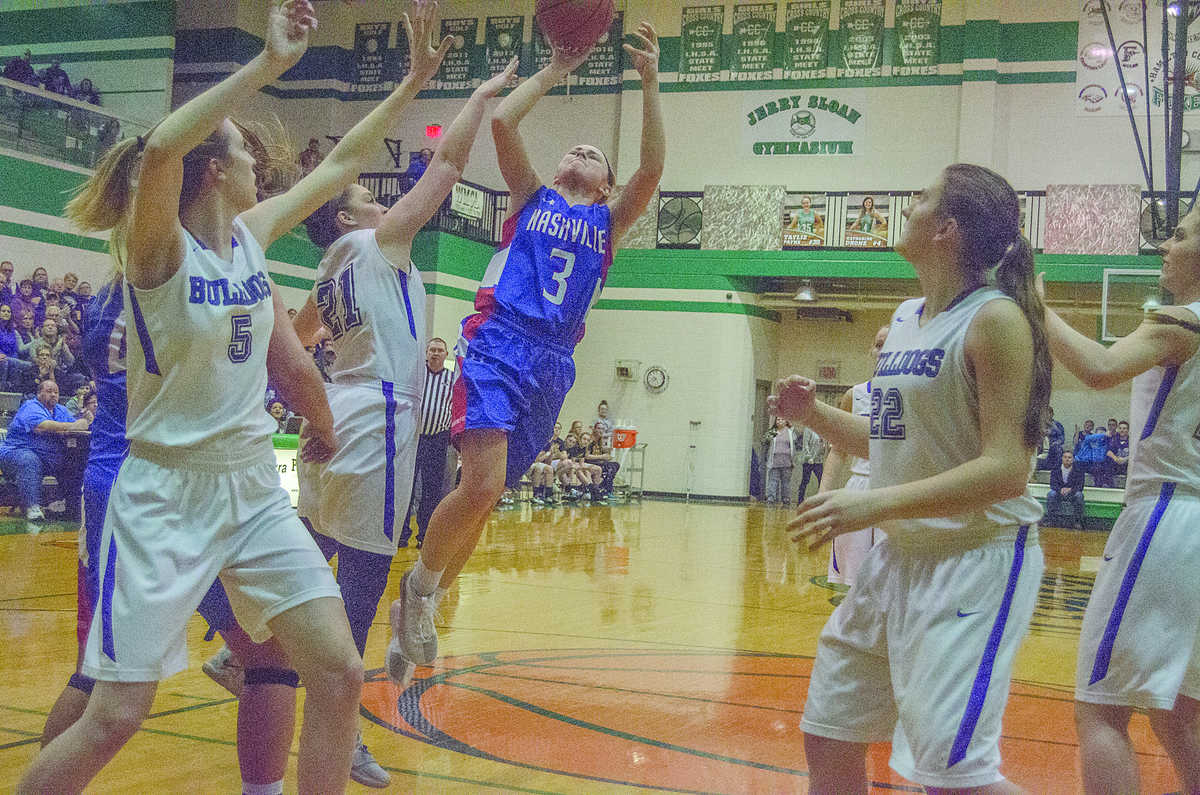 Paige Kasten puts up a circus shot during the Hornettes season-ending loss to Harrisburg. 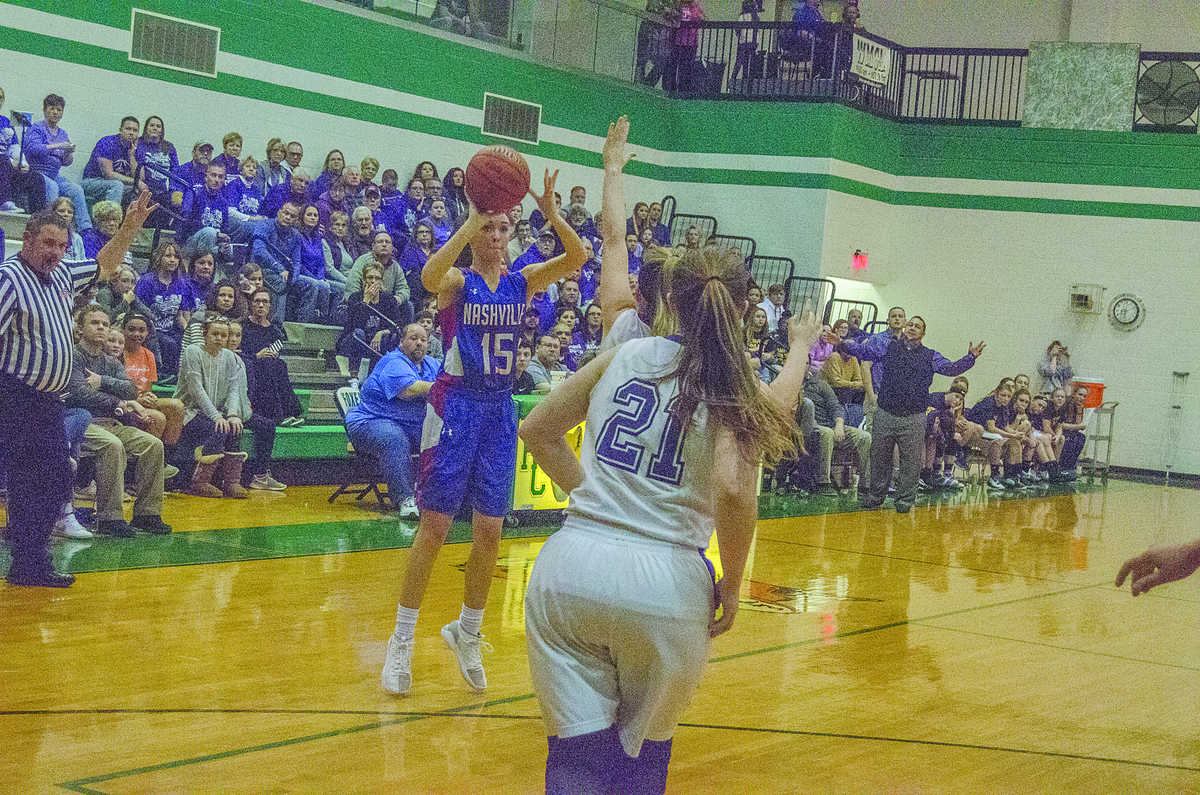 Rachael Kell looks to connect from behind the arc during the Hornettes loss in the Sectional Semi-Finals.

By Brent Huelsmann
The Hornettes season came to an end this past week, as Nashville fell to Harrisburg 43-30 in the IHSA Class 2A Sectional Semi-Finals. The Hornettes fell behind early and could never recover as Harrisburg advanced to the Sectional Final against Mater Dei. The Lady Bulldogs would fall to Mater Dei in the Sectional Final and end the season at 31-1. The Hornettes finished the season with a record of 22-8.
The Hornettes started the game cold from the floor, as Harrisburg rushed out to an 8-0 lead over Nashville to start the game. Nashville did not score until there was 2:48 left in the first quarter. At the end of the first, the Hornettes trailed Harrisburg 12-3. In the first, the Hornettes went 0-6 from behind the arc, and 1-10 overall from the field.
The Hornettes offense continued to struggle in the second quarter. Harrisburg took their largest lead of the game at 18-5 midway through the frame, but Nashville scored four of the final five points of the half and trailed 18-10 at the break.
The Hornettes were held without a three in the first half, as they went 0-11 in the first half of play from outside.
After the game, Hornettes coach Doug Althoff talked about missing shots. “Sometimes you make them, sometimes you don’t. In big games like that it’s a lot harder to make those sometimes. Let’s be honest. There is a lot more on the line. You get a little tight especially if you don’t get that first one and you start pressing a little bit. But you know what, I am so proud of that team. They played their guts out for us, this coaching staff, and this school. You can’t ask for anymore than that.”
The Hornettes cut the Harrisburg lead to six early in the third quarter, but Harrisburg quickly pushed the lead back to ten. The Hornettes managed just five points in the third quarter, but did knock down their first three pointer as Ahlers connected to end the drought. At the end of the third, Nashville trailed 30-15.
The Hornettes cut the deficit to nine early in the fourth as they started the quarter on a 7-1 run. Nashville would eventually cut the Lady Bulldogs lead to eight, but could not close the gap further as Harrisburg was able to put the game away late as they knocked down free throws to put the game out of reach. When the final buzzer sounded, Harrisburg was on top 43-30.
Althoff gave credit to Harrisburg’s defense after the game. “You have to give credit to their defense. Their defense was pretty salty tonight. We really couldn’t run much of an offense, and our sets weren’t very effective. We got a few in there, but you know it’s postseason, and you know you’re going to get everyone’s best game.”
Althoff then talked about the three seniors on the squad, Karly Stanowski, Rachael Kell, and Paige Kasten. “They are quality kids, they’ve been around for three or four years. And it’s going to be hard to replace them. Let’s be honest, I’m gonna miss them, cause they are not only good basketball players, they are really quality people, and I truly enjoy being around them, and I’m going to miss that time together, I really am.”
Stanowski finished the game with 14 points in the loss. Ahlers finished with nine points, followed by Kasten with three points. Emily Stern and Sabrina Kollbaum each finished with two points to round out the scoring.
Posted in Sports, Sports Lead