At the March 19 meeting of the Nashville Community High School Board, George Evans, the Interim President of Kaskaskia College, visited with the board and spoke to them about his interest in focusing KC on career education and on getting KC students into jobs.
“I come from a CTE (Career and Technical Education) background,” said Evans. “If there’s one thing we need to do better at, it’s getting our students into jobs.”
Evans said that he was visiting all 17 high schools in KC’s district, and said that he thought of these schools that feed into KC as the college’s “partners”.
Evans also addressed the “dual credit crisis”, a change in rules that made it so that in the 17 those 17 high school districts, approximately 5,300 yearly college credit hours worth of classes were lost due to changes in credentialing rules mandated by state and national higher education organizations.
With the loss of those credit hours, the people who have been hurt the most are “mom and dad and the students,” Evans said.
NCHS Interim Superintendent Thomas Hawkins agreed and said that dual credit programs between KC and the high schools had numerous benefits, including economics, helping to save families some money on college courses, and in giving those students a head start on their career credentials in a world where most times a high school education, at least on its own, is no longer enough.
Evans stated that he was working with the Kaskaskia College Foundation in order to bring at least some dual credit courses back.
Additionally, Evans said, “we have no intention of ever charging for dual credit at KC,” saying that as far as he was concerned, it was already paid for due to the fact that the people in the district were taxpayers that already supported the college.
In closing, Evans again pushed for interaction and cooperation between area high schools and KC, saying, “I think with us working together, we can accomplish a lot of things.”

The board approved reseeding and turf repair of the Hornets football field, to be done by Heartland Turf Farms at a cost of no more than $7,300.
The board also approved the purchase of a new lawn mower, a 2018 Grasshopper 735 to be purchased from Diedrich Implement. The District’s old mower would see quickly decreasing resale/trade-in costs if they used it for another season. The new mower, plus an extra set of blades cost $5,000 with the trade-in of the old model.
There was also discussion of efforts to purchase a reel mower to help with upkeep on the football field.
Talking about the reseeding and turf repair, board member Paul Barczewski said, “if this is done, then a reel mower has to be used.”
Barczewski said that with a 72-inch cut like the one on the mower the board approved the purchase of, the unevenness of Hornet field made it so that the blade would “scalp” parts of the turf that were relatively too high, where as a reel mower would have cutting sections no more than 12-inches wide.
“You would have to cut much more often too, because if you don’t, there would be too much thatch.”
The board approved the reseeding and turf installation, but added the caveat that the district maintenance team would need to be provided with a schedule of when everything is happening out there.

NCHS Principal Mark Begando told the board that the district had received an offer to install a large video display system capable of showing live footage in Assembly Hall.
“It’s free of cost to the district,” Begando said, but stated that it would be paid for by advertising sold around the display itself, and the installation would need to be paid for by the school.
The company Begando spoke to said that they would need around $60,000 in advertising to pay for it for five years. At the end of that five years, he said they would need to sign up new advertisers or the district would need to pay $10,000 to keep the display.
Begando said that the installation costs did not worry him, but “I’ve never seen a community give like they give here. This would be a wonderful thing, but I would be concerned that if people gave for this, they might not give elsewhere or for other things.”
“We have gone through this about a year or so ago,” said board member Sharon Ogrzewalla. “The cost is astronomical.”
“I think this company would have to cast a wide net to get those kind of dollars around here,” said board member John Hallock.
“Once you figure out what it would cost those advertisers, that’s when you figure out if it will fly or not,” said Ogrzewalla, but added, “at this time, it just doesn’t sound feasible.”

After a rough flu season, “it looks like we’ve made a pretty strong recovery,” Begando told the board, saying that there was 95% attendance in February.
Begando went over some of the meetings and plans he’s taken part in as far as keeping NCHS safe. Begando told the board about weekend safety meetings with students and on all-school assembly held on March 14 (see the article from the March 21 edition of The Nashville News for more).
Begando also said that NCHS Music teacher Steve Browne was planning a concert called “Pop Palooza”, which he was planning on making happen with the fourth period Pop Music class.
The event would take place outdoors (reminiscent of the Solar Eclipse picnic and concert at the very early part of this school year), and would have bounce houses and fundraisers to help student musicians go to the Sugar Bowl. Students would be charge a price for admission of a canned food donation.

The board renewed the district’s IHSA membership.
The 2017-2018 school calendar was amended. After snow days on January 12 and 16, the amended calendar has the last day of student attendance on Monday, May 21, while the last actually day of the year would be Tuesday, May 22, a teachers’ institute day.
The board authorized Hawkins to enter into negotiations with Sherman and Schmale bus companies.
The board authorized Hawkins to set a negotiations start date with the teacher’s union. The current contract ends one day before the next school year starts, in August, and negotiations need to begin at least 60 days prior to that, so June.
The board approved a transfer of $170,000 from the tort fund back into the working cash fund, repayment of an interfund loan taken out earlier in the school year.
The board looked at installing 400 linear feet of fencing between the baseball fields. Belleville Fence bid the job at $2,336. Some of the work had already been done by baseball team fathers and boosters though, so the motion to install the fence was tabled at Ogrzewalla’s request so that Hawkins could check to see whether there were any plans currently in place by those NCHS Baseball supporters before proceeding with hiring an outside company to finish it.
The board approved the purchase of a new floor vacuum. The current vacuum is 20 years old, but the squeegee from it can be swapped to the new vacuum, so it will just cost the district $550.
The board approved an amendment to appropriate health-life safety funds to carry out repairs specified after a fall inspection visit by the Regional Office of Education. The total amount, with a 10% contingency, is about $28,000.
Following the board’s approval, the amendment then must be sent to the ROE and the ISBE for approval before work begins.
Nick Wolf was employed as a volunteer football coach, pending the required background check and orientation training.
The board approved operation of the 2018 NCHS summer camps.
The NCHS Baccalaureate will be held on Sunday, May 20, at 2 p.m. The NCHS Graduation will be held on Sunday, May 27, at 2 p.m. 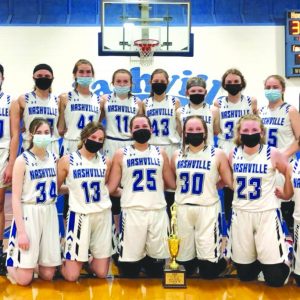