Dumpsters outside of the city of Nashville street shed will now be brought inside following loads of trash being dumped there illegally. 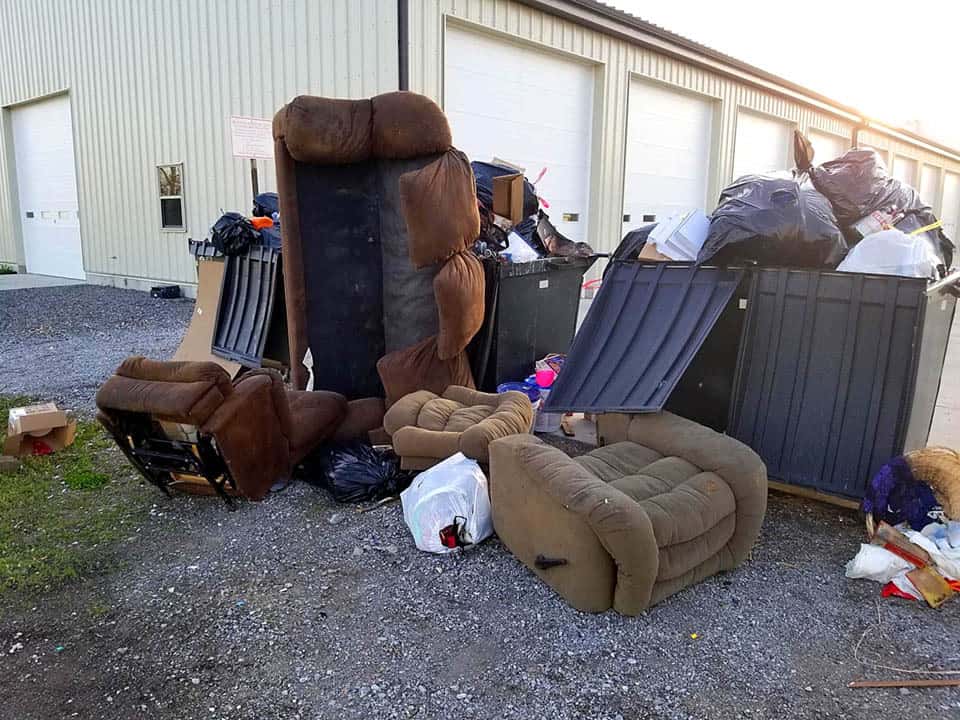 A number of dumpsters at the city of Nashville street department shed will be taken inside at night for the time being, said Nashville Mayor Erik Rolf, after they were used for extensive dumping by non-Nashville residents in the middle of the night.
Rolf stated that employees discovered the dumpsters covered in trash, including several large pieces of furniture, on the morning of Friday, April 27. Street crews were delayed from beginning their regularly scheduled work for the day until after the mess was cleaned up.
“We will get a solution to this,” said Rolf, who said that Nashville residents who took trash to the dumpsters at night were not the problem, non-residents illegally dumping were, but for the time being, the dumpsters will be brought in at night.”
The city has gotten started on stepped-up enforcement of local ordinances, regarding property appearance and cleanliness.
“We are working on getting properties in town cleaned up,” said council member Josh Fark.
“The ramp-up in cleaning properties has been going on since Friday,” added Rolf, “and Brian (Fletcher, Chief of Police) has already had several conversations.”
Unfortunately, the council also noted that the truck used for public recycling in Nashville is currently not-in-service. Street Department Superintendent Rich Schuette said that the truck is owned by Washington County (the recycling service is a joint effort) and they will need to go about getting it repaired.

In addition to the ordinance enforcement, the Nashville police committee is also looking into a school resource officer for Nashville District 49, the public primary and middle school, who requested the city do so.
“There’s a lot of things that we would need to do on that,” said Fark, and stated that they would need to hold a police committee meeting to discuss specifics for a plan and establish the new position in the department that it would entail.
The council also discussed purchasing video recording equipment for an interview room and a phone line recorder for the police department. Currently, if Nashville Police Department members have need of such equipment, they need to utilize Sheriff’s Department facilities.
The council was looking into a quote they received for the items from Nelson Systems, a company that is based out of Springfield, but which Fletcher said had a technician who lived near Pinckneyville that would be able to help with installation and if any problems arose.
The item was tabled for the time being though, because council members wanted more clarification on items listed in the quote, as well as regarding the system’s software license and warantee concerns.
As for the phone line recorder, that item is being tabled as well until some issues regarding the department’s phone lines themselves can be addressed.

Jay Colbrook of the Nashville Planning Commission approached the board, bringing with him a request for rezoning a handful of lots owned by Bob and Gina Howard from residential, R2, to business, B1.
Colbrook said that they planning commission had looked at the plan and voted to recommend to the council that they approve the rezoning, which they did.
“I think this is good,” said Rolf. “I’m glad that the planning commission saw this through. It’s good to see our downtown business district growing.”

The council voted to authorize Schuette to seek bids for a new backhoe, farm tractor and wheel loader.
Schuette told the council that he had already received some bids for a backhoe, but Rolf asked that the be allowed to seek more, and for the other pieces of equipment as well, with the city retaining the right to accept or reject any bids.

The city of Nashville is seeking to hire two part time employees for summer help.
Along with getting part time help for the streets and utilities departments, “it would be my recommendation that we get the part time person, but that we also get a full-time person as well,” said Rolf.
He stated that the street department had four employees that would be retiring in the next year and having a new full time employee in early to begin training while the veteran employees were still present would be a good thing.

The council received a request from Farmers Mid-County Feed to install a 500 gallon propane tank at their location on S. Mill Street. The request was approved by the city as they met all regulations and requirements. The tank will be used to fill smaller propane bottles for customers.
The city will be working towards connecting a gas main to the Deerfield subdivision, near the city water plant. Utilities Superintendent Blaine Middleton said that he had received requests for service from two current residents of the subdivision, as well as from a person who had yet to build their house there.

It’s getting close to time that another load of sludge needs to be removed from one of the city’s sewer lagoons, Middleton and council member Doug Hargan stated.
The company that does the removal, Metro Ag, had offered the city a five year contract which provided three removals over an up-to-five year span at a cost of $32,000 per removal. Sludge removal is a regular need for the sewer department and the price, “goes up by about $1,000 each time,” said Hargan.
“In a five year period, we can call them up three times?” asked Fark.
“Yep,” said Hargan, “and it will lock in the price.”
“I say we lock in the price,” Fark agreed.

The city voted to purchase Automatic External Defibrillators (AEDs) from GMD of Palatine for $17,521, which will equip all of the city’s buildings and the police squad cars.
Rich Schuette stated that John Felchlia of the Washington County Ambulance Department was planning on coming out to conduct AED training for city employees, and that it would also be their qualification for CPR training at the same time.
Rolf stated that Street Department employee Seth Dinkelman, who brought the council the quotes for the AEDs, had looked into getting certified as an AED trainer himself.
Rolf said that he believed the city footing the bill for Dinkelman’s certification might be a good choice, not just by providing the value of the city having their own trainer in-house, but in the value to the community of having Dinkelman, a firefighter, being able to train others at AED use in that role as well.

The paragraph under the heading “Personnel” is different from what was originally published in the May 9, 2018 edition of the paper and in the first version of this story published online.
Previously, the retiring employees were identified as working in a different department, which was incorrect.
The Nashville News regrets the error.