2018 Washington County Relay For Life Had Great Attendance And Weather

“Every year, we’re on a journey,” said Nancy Newby, Washington County Relay For Life Committee Chair, welcoming the crowd to the 2018 Relay, held the evening of Friday, May 11, at the Okawville Community Club park.
“We’re on a journey to support each other, to raise money to support the survivors,” Newby continued, “and ultimately, to create more survivors.”
After a somewhat difficult start at a new venue last year, this year, attendance was up.
“It was much, much better this year,” Newby said. The weather was perfect and the park was a wonderful place to have this. We had people there coming and going all night long. All the concession stands were sold out.”
Relay for Life is a fundraising venture, and in that respect, 2018 has been successful as well. 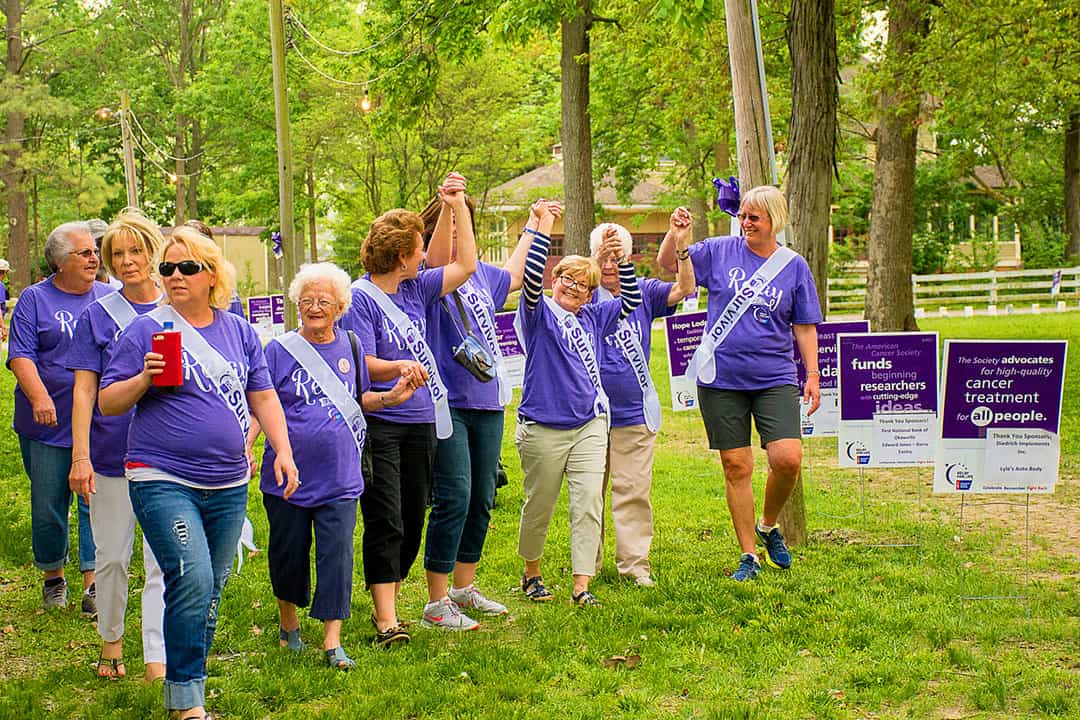 Arm-in-arm, triumphant – cancer survivors took the first lap at the annual Washington County Relay for Life, held at Okawville Community Club Park on the evening of Friday, May 11.

“We’re right at $38,000,” Newby said, adding, “$13,000 of that was in sponsorship, and that’s the highest we’ve ever had, so that’s really good.”
This year’s event had 15 teams, as well as numerous individuals and families who helped to make it a success.
The event was held earlier in the year than last year’s, which likely contributed to more people coming out.
After a welcome, introduction and an opening prayer, the Relay itself started off with a survivors lap, followed by a caregivers lap, then the team lap.
The survivors were led off in their lap by a color guard of members of the Okawville American Legion Post 233 and Boy Scouts of Troop 127, as well as a Dixieland Parade Band, which add a little rhythm and bounce to everyone’s steps.
Entertainment through the evening included Jamie’s Tumbling, the NCHS Jazz Choir, the Venedy Band, and Jeff Rabenort and Kevin Stine.
As the skies got dark, the luminaria ceremony was held, a somber and heartfelt time in the event, when decorated paper bags are lit up, both in honor of those who won their fight against cancer, and in memory of those who we have lost to it.
Relay for Life stays open for fundraising through July 10, as there are still a number of events to come and hopefully, more money to come in.
The goal for 2018 is $48,000, and, “we’re hoping that we get closer to that as we get further along,” Newby said.
If anyone would like to support the Relay or was unable to make it out in person, or wants to make a further donation, they can donate online (the Washington County Relay for Life page can be found at main.acsevents.org/site/TR?fr_id=86958&pg=entry), or contact Newby or any teams or representatives, who will still gladly accept the money.
Posted in Front Page, News