Three Buretta siblings, Vietnam Veterans, participated in the Missouri Franklin County Honor Flight on April 21, 2018.
They, along with other 23 Vietnam and Korean veterans, were flown to Washington, D.C., for a tour of war memorials. 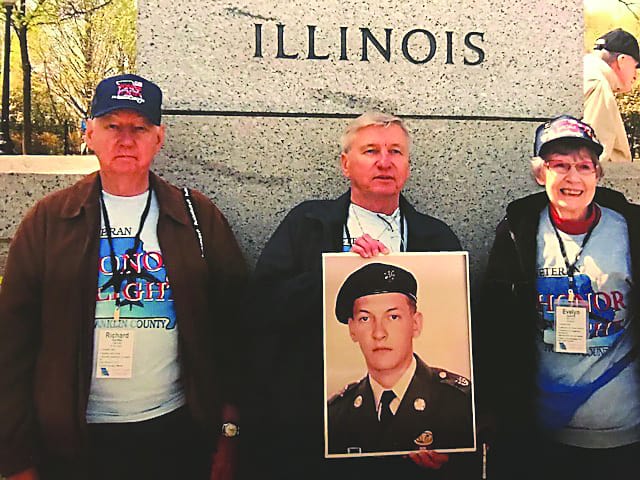 The Buretta veteran siblings, left to right, Richard, Air Force, Washington, MO; Gene, Army, Ashley; and Evelyn, Army, Ballwin, MO. Richard and Evelyn are former residents of Ashley. The Burettas took along a portrait of their Army Vietnam veteran brother Bryan, who passed away in 2009.

They walked among the Vietnam, WWII, Navy, Korean, Air Force, Tomb of the Unknown Soldier, and Pentagon memorials, as well as viewing a few other places on the bus excursion. Applause from airport customers and employees and from current active duty service members greeted the veterans in and out of airports. Family and friends also welcomed them in a reception upon their return flight in St. Louis.
Their Honor Flight guardians were: Duane Chwascinski, nephew; Monica Chwascinski, niece; and Jared Buretta, Gene’s son.
Posted in Front Page, Milestones, Regional