Beginning the newspaper’s 85th year of publication, an announcement was made on Friday, June 29, that The Nashville News has a new owner, after Greg Hoskins of Better Newspapers, Inc., acquired the paper from previous owner Chuck Neal.
Hoskins met Friday with Bruce Wallace, manager of The Nashville News and Neal’s representative, to finalize the deal before making the announcement to newspaper staff that afternoon.
Better Newspapers purchasing The Nashville News, “it fits geographically,” Hoskins said, “but more importantly, it fits philosophically with who we are.” 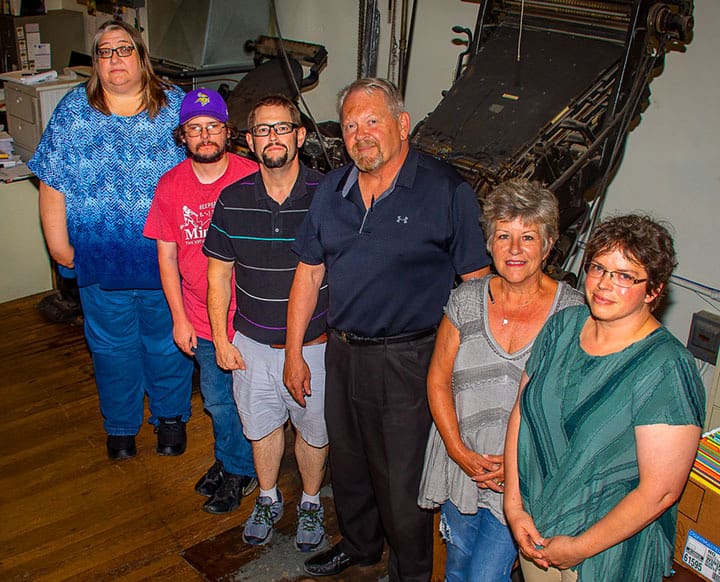 Hoskins, originally a resident of Streator, attended the University of Illinois, and earned a Bachelor’s Degree in Fine Arts. After graduation, he searched for a job, but was finding it difficult due to the economy at the time. He was told of an opening in the sales department of the Times Press, a local newspaper in Streator. Hoskins discovered his love and respect for newspapers at that local company.

Eventually leaving the Times Press, he began working for the American Publishing Company in West Frankfort. This experience took him to Arizona to work for Kramer Publications, which produced a daily newspaper and approximately 17 weekly newspaper and shopper publications.

Hoskins returned to Illinois in 1991 when he heard of a group of newspapers that were in bankruptcy court. He united with Cleon Birkemeyer, a friend from American Publishing, and bought the four weekly newspapers out of bankruptcy. On May 1, 1991, Better Newspapers, Inc., was formed which included the Mascoutah Herald, Scott Flier, Clinton County News, and Fairview Heights Tribune.

In 2012, Hoskins expanded his corporation by building a regional press plant in Altamont. This plant not only prints publications owned by Better Newspapers, but also a variety of other newspapers in the area.
Better Newspapers, Inc. corporate headquarters is located in Mascoutah and is an organization founded on family loyalty. Greg Hoskins is President of the corporation, and his wife, Linda, works in the Editorial Department in Mascoutah. His son, Scott Hoskins, is the corporation’s Business Manager, and his other son, Mark Hoskins, is the Regional Manager for the press plant and newspapers in Altamont.
Posted in Front Page, News