Mr. William Hettenhausen of Okawville, departed this life in the Emergency Room of the Washington County Hospital in Nashville, on Friday, September 7, 2018 at 1:05 P.M. He had attained the age of 83 years, 5 months and 3 days. 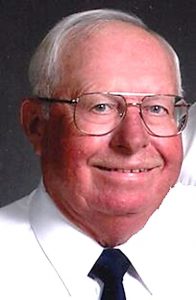 William was born in Venedy Twp., Washington County,  on April 4, 1935 the son of Henry and Caroline (nee Klingenberg) Hettenhausen. He was confirmed in the St. Peter United Church of Christ in Okawville and was a 1953 graduate of Okawville High School. He joined the United States Navy in November of 1956 and was stationed aboard the USS Newport News out of Norfolk, Va., and was honorably discharged in September of 1958. William was untied in marriage to Eunice Ostendorf at St. Peter’s United Church of Christ on August 17, 1963 and she survives his passing.

Willie worked as a printer, operating the linotype machine at the Okawville Times and later at Concordia Publishing House in St. Louis. He finished his career as a printer at Scott Air Force Base. He was a faithful member of the St. Peter United Church of Christ in Okawville. He was also a 37 year member of the Okawville Lions Club and a former member of the Elkhorn Hunting and Fishing Club. He enjoyed playing golf and was a longtime member of the Okawville Men’s Thursday Night Golf League. To say that Willie was passionate about bowling would be an understatement. He was a member of the Greater Carlyle Bowling Association and was inducted into the Greater Carlyle Bowling Hall of Fame. He was a member of the Mascoutah 700 Bowling Club and has a bowling league named in his honor at Baden Bowl in New Baden. Through the years, he has rolled four perfect games, two 800 series and several 700 series. Willie also loved sharing his passion for the sport by coaching and teaching junior bowlers.

Funeral services were held from the St. Peter United Church of Christ in Okawville on Monday, September 10, 2018, with Pastor Jeffrey Schwab officiating. Interment will be in the church cemetery. Military graveside rites were accorded by American Legion Post 233 of Okawville.

In lieu of flowers, memorials may be made to St. Peter’s Building Fund or to the Mascoutah 700 Bowling Club and will be accepted by the Campagna Funeral Home.