Mr. Lester Lee Rick, of Nashville, departed this life at the Friendship Manor Healthcare Center in Nashville on Saturday, September 15, 2018 at 11:40 P.M. He had attained the age of 79 years, 10 months, and 4 days.  He had suffered from mixed vascular dementia and alzheimer’s disease. 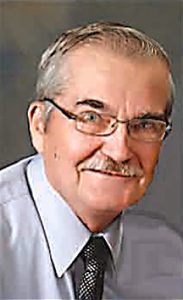 Mr. Rick was born in Centerville Station, IL on November 11, 1938 the son of Martin and Mabel (Traiteur) Rick.  He was united in marriage to GeorgieAnn Malawy on April 19, 1958 at St. Charles Catholic Church in DuBois, IL and she survives his passing.

Les attended Assumption Catholic High School in East St. Louis, IL graduating in 1956. He was employed by the Kroger Company for 32 Years as a bagger, produce clerk and the last nineteen years as a meatcutter and meat merchandiser.  He worked for 13 years as a meatcutter for B.V. Foodworld in Belleville before retiring in January 2000.  He was a member of Local 534, a parishioner of St. Ann Catholic Church in Nashville, and a member of the Knights of Columbus Council #4384 in Nashville, IL. Les enjoyed gardening, receiving the seed catalogs in January, jigsaw puzzles, playing scrabble, traveling out West and reading many non-fiction old West books and watching old movies about the old west.  His favorite cowboy actors were Randolph Scott, Audie Murphy, Alan Ladd, Glenn Ford and Joel McRea.  His favorite book was an Atlas which he is taking with him.  Before Computers, he would begin in January planning a two week trip out west using a yellow legal pad.  He was his own travel agent as each trip was planned to a “T” for each day’s hikes sightseeing, and the town or city where he would be staying.  He did these planned trips for 24 years.  He was a fair weather Cardinal fan, watching the games until they were losing then the channel was switched.

Left to mourn his passing is his wife, GeorgieAnn Rick of Nashville; children, Mitch Rick of Waterloo; Donald and Jennifer Rick of Pocahantas, Tom and Holly Rick of Carterville and Mary and Brian Heckert of Nashville; thirteen grandchildren, Vicki and Sean Barbour of Smithton, Katie and Sean Burke of Waterloo, James Rick of Columbia, Deneane and Ryan Wiedwelt of Addieville, Nichole and Bryan Fritz of Fayetteville, Jared and Ashley Rick of Belleville, Daniel and Sonya Jaimet of Carterville, Jason and Christy Jaimet of Carterville, Nathan and Jill Jaimet of Paducah, KY, Christopher and Briana Heckert of Oswego, Erin Heckert and special friend Evo Soria of Elgin, Michael Heckert and special friend Alexandra Meckes of Lexington, KY, Brandon Heckert and special friend Rachel Dick of San Jose, CA; nineteen great-grandchildren and a baby boy or girl due in January 2019; two sisters, Pat Aldrich of Godfrey and Norma and Larry (Junior) Havel of Fairview Heights; two brothers-in-law, Richard and Deanna Malawy of Okawville and Gary and Diane Malawy of Wentzville and a former daughter-in-law, Linda Gantner of Belleville; nieces, nephews, other relatives and friends.

Mass of Christian Burial will be held at St. Ann Catholic Church in Nashville, IL on Thursday, September, 20, 2018 at 10 AM with Fr. Andy Knopik officiating.  Interment will follow in the St. Anthony cemetery in Lively Grove, IL.

Friends may call at the Campagna Funeral Home in Nashville, on Wednesday from 5 PM until 8 PM and on Thursday from 7:30 AM until 9:30 AM.

A prayer service will be held at 7:30 PM on Wednesday at the funeral home.

Should friends desire, mass offerings or memorials may be made to the St. Ann Catholic School, Diabetes Association or the Alzheimer’s Association and will be accepted by the Campagna Funeral Home.