Everything is going right for the Hornets early in the season. The Hornets have started the season with a 14-0 record as they went into a matchup Friday night against Mater Dei at the 58th Annual Mater Dei Christmas Tournament. The Hornets won their final game before Christmas against Carterville, before defeating Metro-East Lutheran, Mascoutah, and Red Bay, Alabama to begin the Christmas Tournament. The Hornets will begin the month of January with a tough road matchup at Pinckneyville on January 4 before playing in the Highland Shootout on January 5.

On December 21 the Hornets traveled down to Carterville for a SIRR Mississippi Division matchup. The Hornets had little trouble taming the Lions as Nashville picked up a 44-24 win.

The Hornets got out of the gate quick against the Lions, as they build a 14-4 lead after one quarter of play. Both teams traded buckets in the second quarter, but the Hornets maintained their lead and went into the break with a 22-12 lead.

Carterville battled in the third quarter, but could not chip away at the Hornets’ lead. The Hornets outscored the Lions 9-7 in the frame. Nashville would then put away Carterville in the fourth quarter to take the win.

Nashville got off to a slow start in this one, but found their composure midway through the first quarter and picked up a 52-37 win.

Metro-East Lutheran jumped out to a 9-1 lead over the Hornets, but could not maintain their early momentum. Nashville would go on a 13-0 run to end the first to take a 14-9 lead after eight minutes of play.

After the game, coach Wayne Harre talked about the end of the first quarter. “I thought we had a little more ball movement, and we had more energy after we called timeout. They had something to do with it. I thought they came out ready to go, and we were a little flat footed.”

The second quarter saw the Knights cut the lead to 14-11, but in the blink of an eye the Hornets extended their lead to nine. Nashville led by as many as ten in the second quarter. The Hornets went into halftime with a 26-17 lead.

Nashville controlled the game the rest of the way as the Hornets led 38-23 after three quarters, and cruised in the fourth to a 52-37 win.

Parker led all scorers in the contest with 21 points. Bultman finished with 12 points to go along with 11 rebounds. Hercules was also in double figures with ten points in the win. Bergmann and Terry Pelczynski chipped in three points apiece. Harre finished with two points. Anderson rounded out the scoring with one point.

The Hornets had a few hours off before their next game when they took on Mascoutah in the night session of day one. The Hornets would come away with their second win of the day as they got past Mascoutah 59-49.

The first few minutes of the contest saw the teams go back and forth trading the lead. Mascoutah would grab the lead at 6-5, but the Hornets would come right back down the floor to take lead. Mascoutah would never lead again in the contest. Nashville would lead by as many as seven in the first quarter, but Mascoutah was able to cut the lead to four at the end of one. Nashville went into the second quarter with a 16-12 lead. 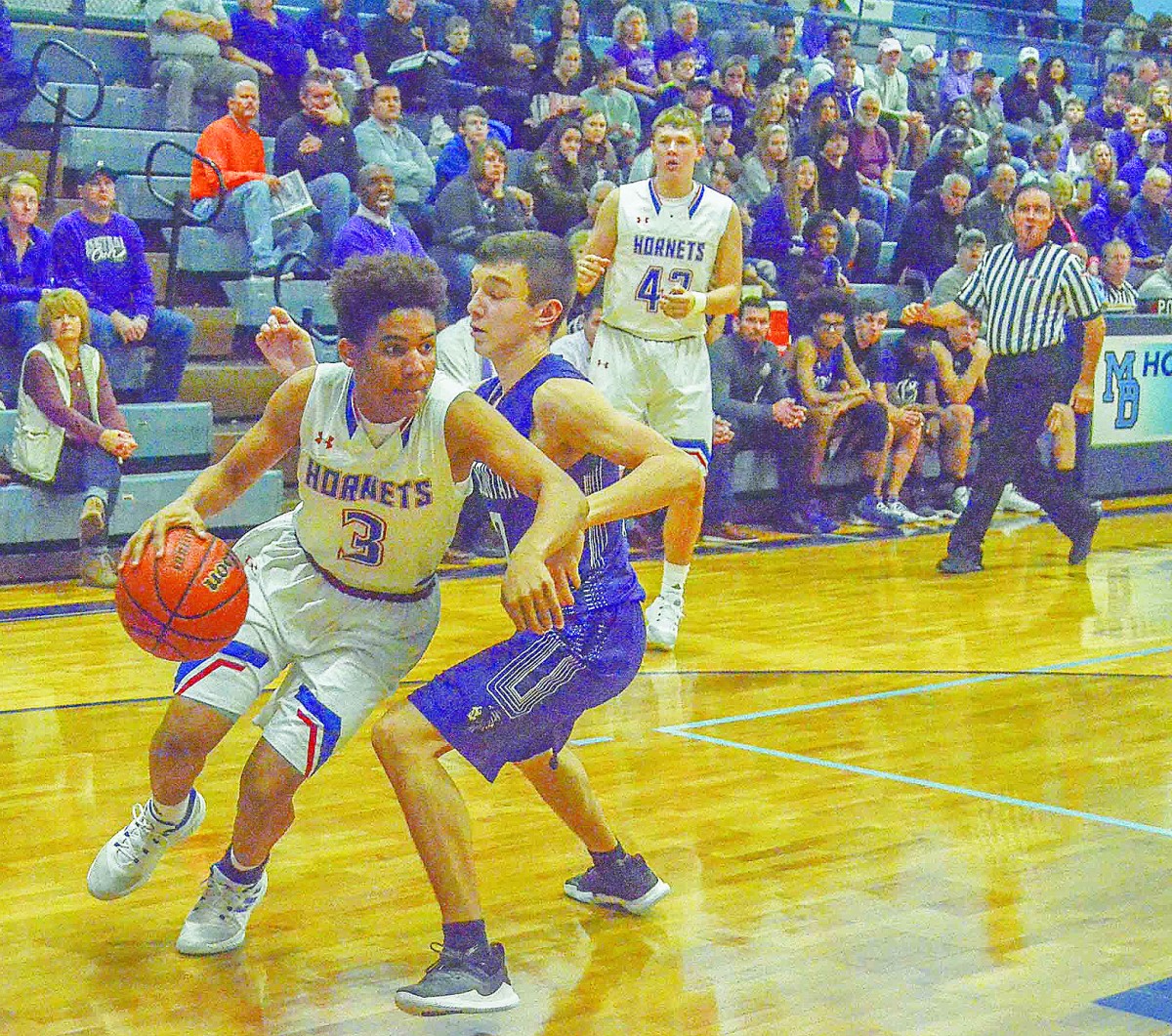 Tristen Hercules turns the corner during the Hornets win over Mascoutah on December 26.