CENTRALIA – There were a lot of smiles and cheers as dozens of new citizens were sworn in during a naturalization ceremony held at the Lifelong Learning Center on the Kaskaskia College campus Friday morning.

U.S. District Judge Nancy Rosenstengel presided over the ceremony, adding that each of the new citizens should be proud of the “path and the hard work” that led them to the decision for citizenship.

“This is one of the happiest days that we get to have in the court,” Rosenstengel said. “Because everyone will leave here happy, and that doesn’t usually happen in court.”

The group included 67 candidates with the youngest being 21 years old and the oldest person to be sworn in aged at 80 years old. The individuals came from 27 different countries, including Ireland, Mexico, Vietnam, Brazil, India, Canada and Ethiopia, among others.

The ceremony also included a presentation by the Beckemeyer American Legion Color Guard. Members from several local Daughters of the American Revolution were on hand to give the new citizens flags and other information.

KC President George Evans also spoke during the event, stating that the ceremony was the culmination of many years of hard work from those present as well as their loved ones who stood by them.

“You have the responsibility to be a good person,” Evans said. “Honesty, respect, caring, truthfulness and love for your fellow man and love for this great nation is the essential mortar that holds the bricks together to maintain the foundation of America.”

Several stepped up to discuss their individual journeys to citizenship.

Anthony Maina of Centralia said his wife was the first one to immigrate from Kenya to the US in 2006. After they wed, his wife applied to secure his immigration visa. But the process was long, and Maina and his wife were separated

by an ocean for more than three years. In 2014, Maina was able to relocate, and he later earned his associate’s degree from Kaskaskia College in 2017.

“It’s a wonderful thing to be a part of the great American family,” he said to the crowd. “You people are wonderful. I love everything. I love the people. I love the music. I love the vibe here. It’s great. And I love the food — the cornbread, the Italian beef, they are amazing. You can’t even have enough of the deep dish pan pizza.”

While he said that Centralia has felt like a home away from home for him and his family, Maina said that he would hope that there could be a way for the naturalization process could be expedited for spouses.

“The emails and the calls, they were not enough,” he said.

Mariela Agrawal of Carbondale said she came from Colombia as a scholar and attended Southern Illinois University, where she graduated with her doctorate degree. She said she was glad to celebrate her citizenship with her family.

“I am very excited,” she said.

Riah Vicik, a high school biology teacher at Belleville West High School, was six years old when she arrived in this country. She added that she hopes her mother will soon follow in her footsteps and also receive her US citizenship. 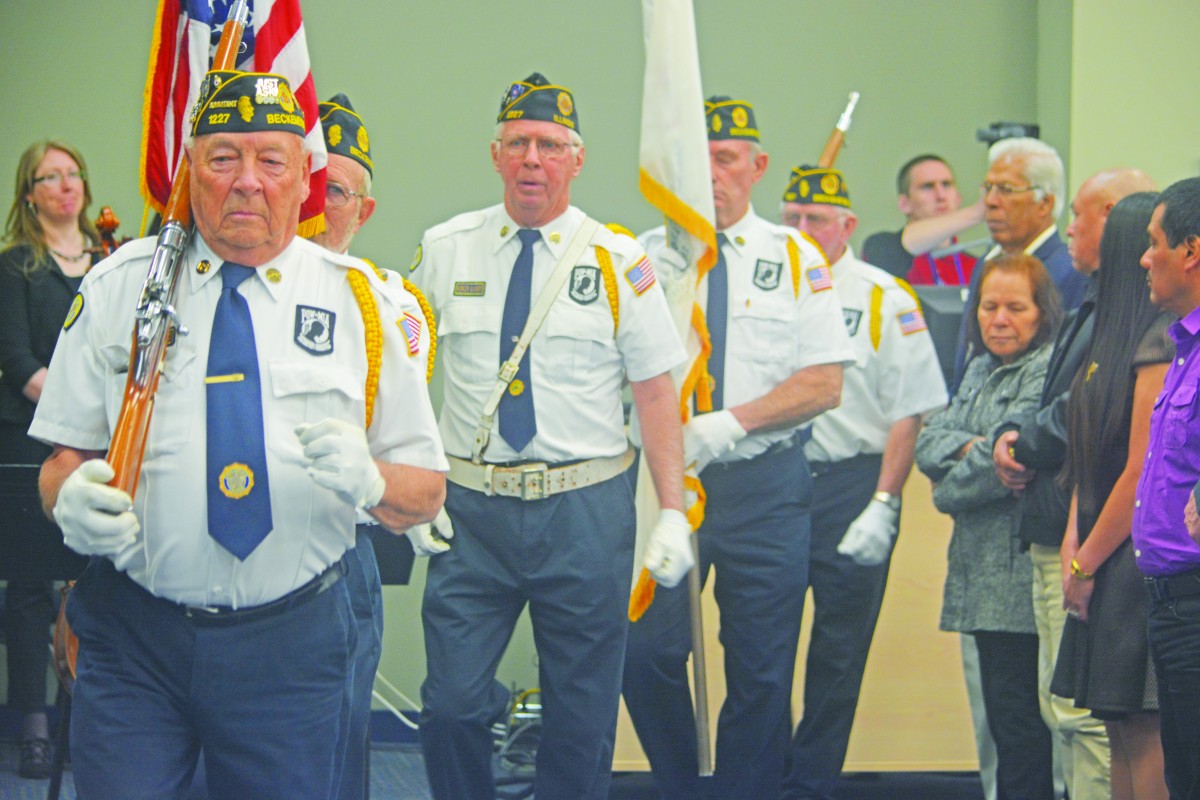 Beckemeyer American Legion Color Guard brings in the flags at the beginning of the naturalization service. 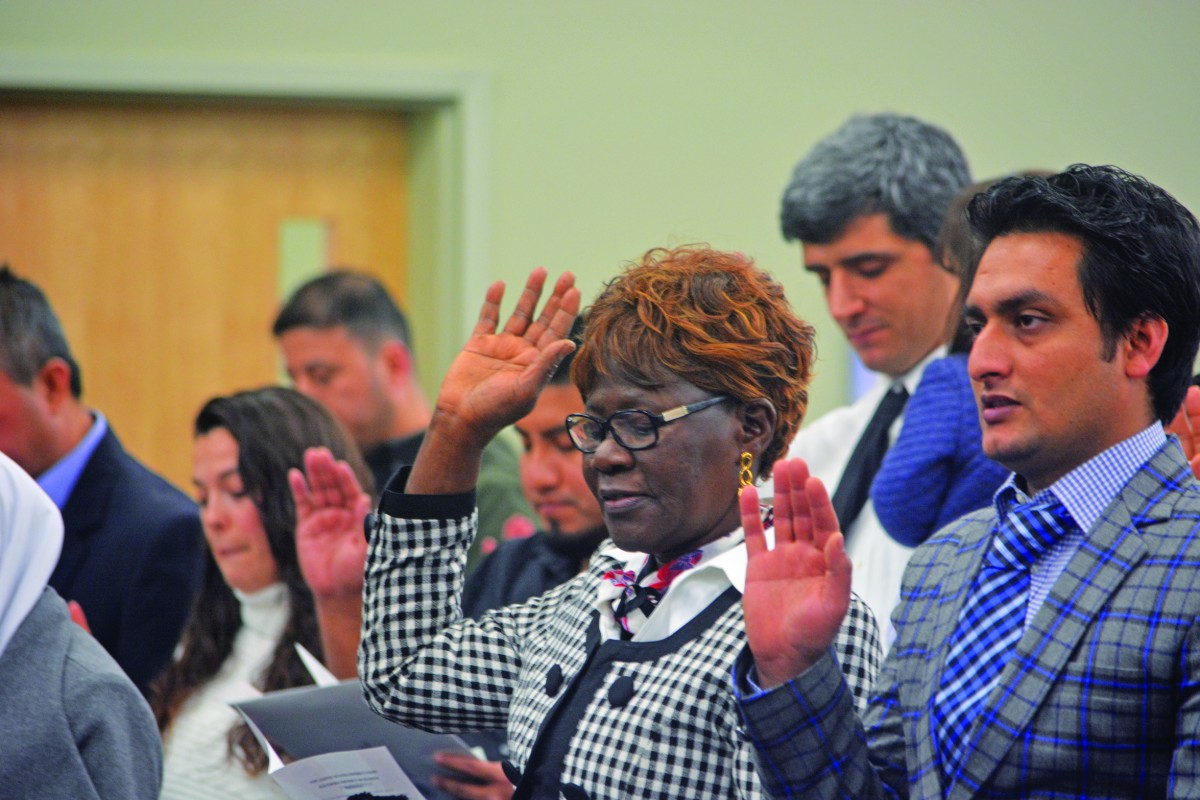 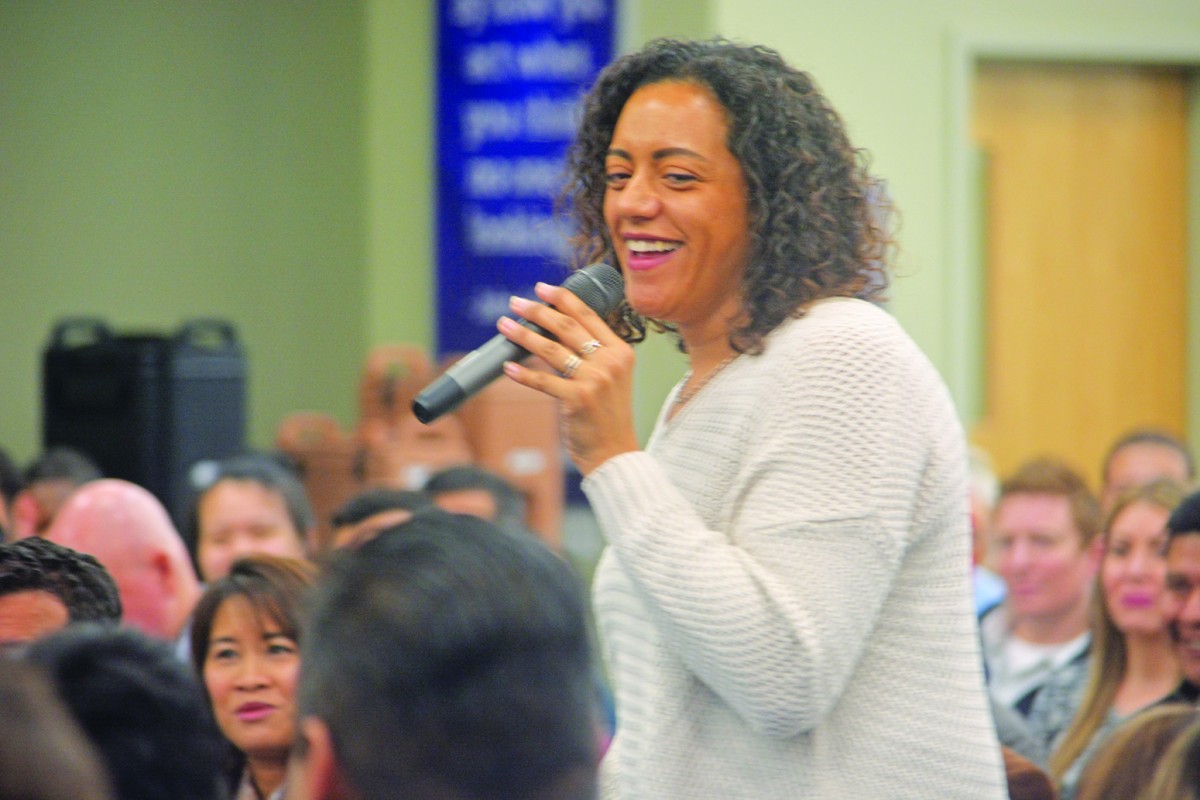 Riah Vicik addresses the crowd and discusses her personal story leading up to the naturalization ceremony held Friday on the Kaskaskia College campus. She said she hopes her mom will follow in her footsteps. 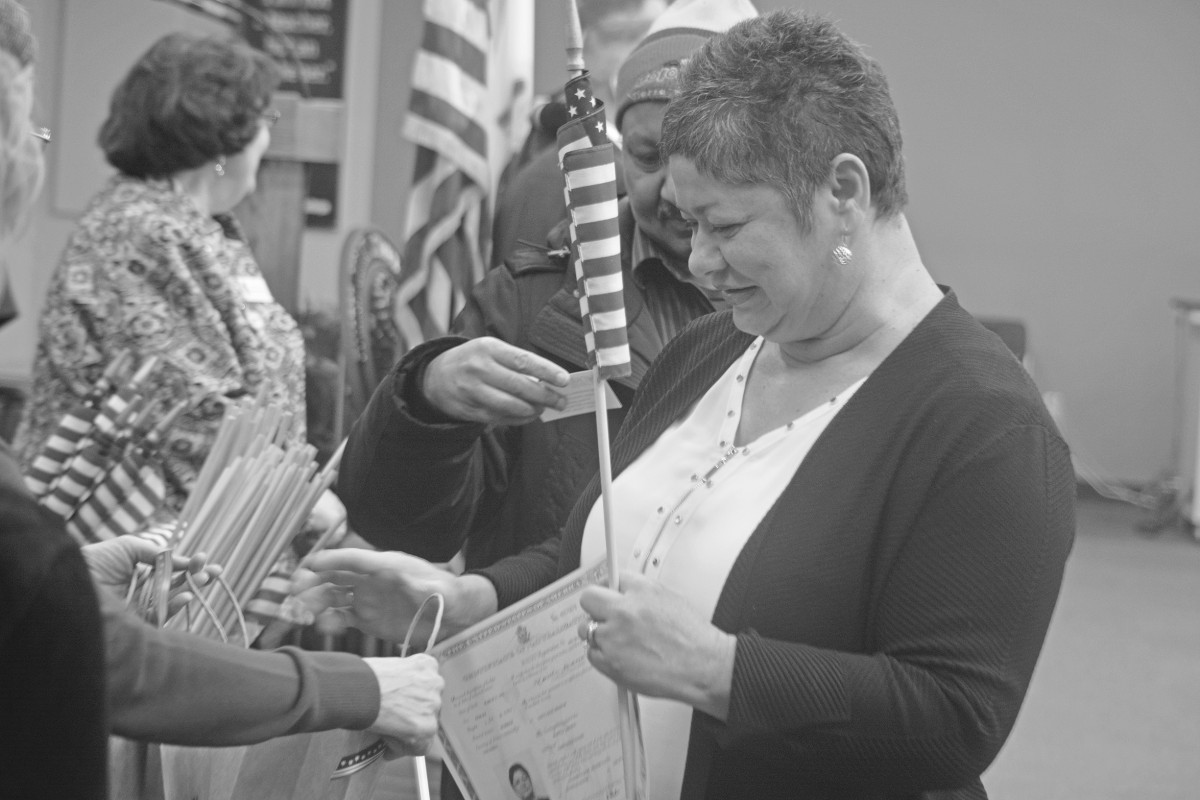 Mariela Agrawal looks over the materials she has received from the Daughters of the American Revolution. Originally from Colombia, Agrawal said she is “excited” to begin her new journey as an American citizen.