A tale of two halves for both teams in the IHSA Class 2A Sectional Semi-Final between the Nashville Hornettes and the Harrisburg Lady Bulldogs. For the third consecutive seasons these two programs met up with a chance at the Sectional Championship. After building a big lead in the first half of play, the Lady Bulldogs could not hold off a hard-charging Hornettes squad as Nashville took a 44-34 win.

The two teams traded baskets over the first few minutes of the first, but Harrisburg took control as time wound down in the quarter. With the game tied at four, the Lady Bulldogs ended the first on a 10-2 run to take an eight point lead into the second frame.

Harrisburg’s defense frustrated the Hornettes in the first half, which allowed the Lady Bulldogs to build a 22-8 lead in the second quarter. The Hornettes got the final bucket of the first half, but still trailed 22-10 as the teams headed into the locker room.

The script was flipped in the second half, as the Hornettes defense stifled Harrisburg. The Hornettes did not allow a field goal in the third quarter, and went on a run of their own. Spurred on by a three from Libby Ahlers, the Hornettes started the third on a 13-0 run to take a 23-22 lead. Harrisburg tied it with a free throw, but Ahlers gave the Hornettes the lead for good with a bucket right before the buzzer.

After the game Rylee Luechtefeld talked about the halftime speech of Coach Althoff.  “He was really just like it’s not over yet. I think we all believed it wasn’t over. We went out there and held them to one in the third and that really helped the whole rest of the game.”

Harrisburg got back within a point in the fourth quarter, but could never get the lead back. Leading 27-26, the Hornettes used a 7-2 run to gain breathing room down the stretch. The Hornettes would lead by as many as 12 late in the going, as their defense continued to shut down the Lady Bulldogs. When the final buzzer sounded, the Hornettes came away with a 44-34 win.

The Hornettes were led by three players in double figures as Luechtefeld and Libby Ahlers each finished with 16 points. Alyssa Cole finished with ten points. Emily Stern finished with two points to round out the scoring.

Nashville was back in action on February 14 as they took on Althoff in the Sectional Championship. The Hornettes battled back from a slow start to take a 49-40 win over the Crusaders. 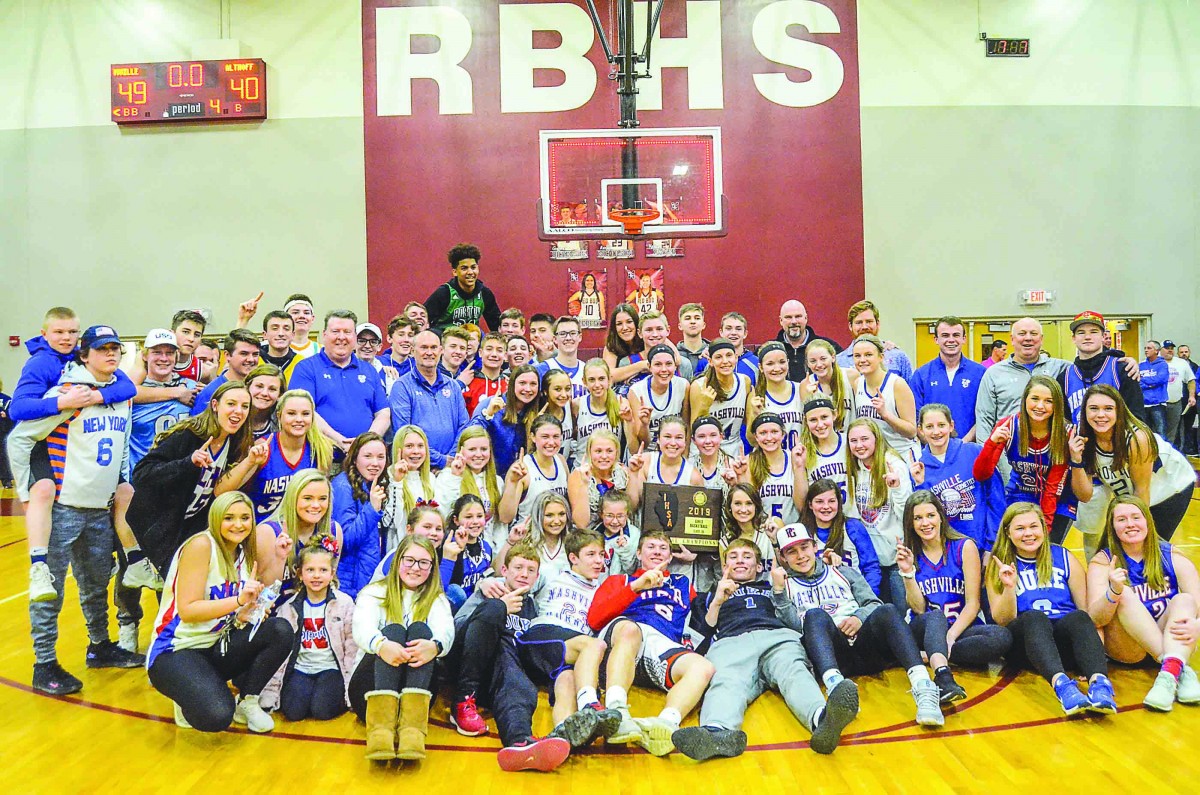