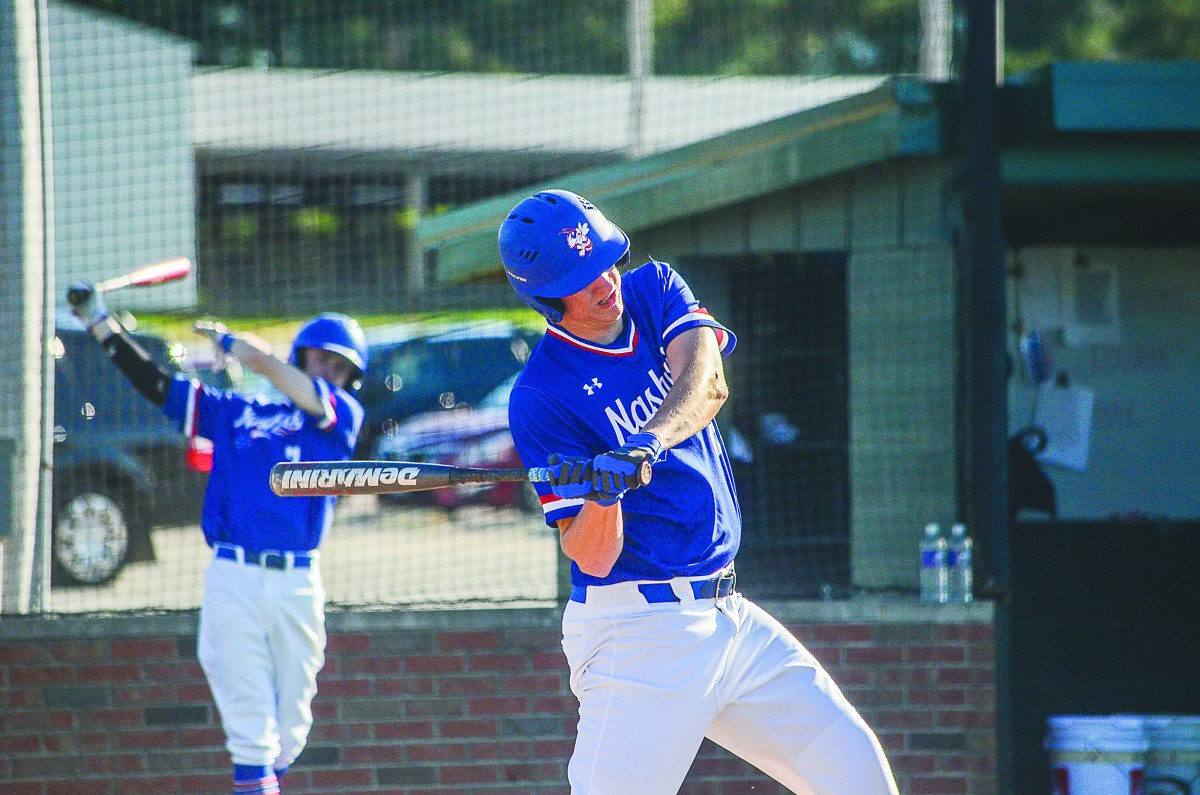 Tanner Bergmann looks to get a hit during a recent game at Hornet Field.

After dropping two games in a five day span early in the season, the Nashville Hornets baseball team has rattled off thirteen straight wins, including four in the last week. The Hornets defeated Pinckneyville, DuQuoin, Chester, and Anna-Jonesboro this past week. The Hornets have a record of 16-2 overall, and a 5-0 record in conference play.

The Hornets kicked off the week with a big 11-1 win over conference rival Pinckneyville. The Hornets used a big third inning to pave their way to victory in the contest.

The score would hold steady until the bottom of the sixth, as the Nick Paszkiewicz scored on an error to close out an 11-1 win in six innings.

The Hornets cranked out eight hits, and drew six walks in the contest. Paszkiewicz finished the game with two hits, and two runs scored for Nashville. Nick Miller and Bryce Bultman each collected one hit, one run scored, and two RBIs in the win. Cole Malawy did not record a hit, but did drive in two runs. Gavin Baldwin singled, scored a run, and drove in a run. Kelton Harre singled, walked, and scored two runs. Gavin Baldwin finished the game 1-4 with a run scored and a RBI. Carson Parker notched a hit at the top of the lineup, scored a run, and walked. Patrick Combs laced a single in his only pate appearance. Ian Blazier walked and scored a run in the win. Tanner Bergmann walked twice and scored a run.

On the mound, Todd Jahnke shut down Pinckneyville. Jahnke gave up four hits, and one run through six innings of work. Jahnke struck out five, and walked one batter.

Nashville was back in action in SIRR Mississippi Division play as they took on DuQuoin on April 9. Again the Hornets dominated their opponent as they defeated the Indians 10-0 in six innings.

The Hornets scored early and poured in on late as Nashville jumped out to a 3-0 lead after one inning of play. The scoring was started on a RBI double from Baldwin that scored Carson Parker. Two more runs would come across to score in the frame on a single by Bultman.

The score would hold until the bottom of the fifth, when Nashville broke the game open. Four runs would come across the plate in the inning. Harre and Blazier each had RBI singles in the frame.

The hornets would close the game out in the bottom of the sixth, as three more runs came into score. Nashville took advantage of two errors in the frame. With two outs and a runner on second, Zack Kempfer doubled to left field scoring Jacob Rounds to take a 10-0 advantage and win the game for Nashville.

After the game Coach Chad Malawy talked about protecting the home field. “That’s the most important thing in conference. We take a lot of pride in trying to win that thing every year. I’ve learned in all my years, you have got to take care of your home field in conference play.”

Bultman kept DuQuoin off-balance the entire day. Bultman pitched a shutout, and gave up just four hits. Bultman struck out three batters. Coach Malawy talked about Bultman’s performance. “Bryce Bultman was really effective changing speeds, did a good job for the most part of keeping the ball down. He got it up and got hit hard a few times. One of the most notable things today was what a great athlete he is, how well he fields his position out there. Between the strikeouts and him fielding his position, he gobbled nine or ten outs today. It’s great having one of your athletes on the team on the mound when it matters.”

At the plate, the Hornets were led by Bultman and Blazier, both drove in two runs, and notched two hits in the win. Bultman also scored a run in the game. Paszkiewicz scored three runs in the contest. Paskiewicz finished the game with one hit. Baldwin went 1-3 with two runs scored, a RBI, and a walk. Kempfer doubled in his lone plate appearance, driving in a run. Harre drove in one run, on one hit, walked, and scored a run. Parker and Bergmann walked, singled, and scored a run. Nick Miller finished the game 1-3. Patrick Combs and Jahnke each drove in a run. Jacob Rounds scored a run.

Nashville played their lone road game of the week as they traveled to Chester on April 10. Again the Hornets needed less than seven innings as they disposed of the Yellow Jackets 12-1 in five innings.

Back to back RBI hits from Paszkiewicz and Bultman gave the Hornets a 2-0 advantage after a half inning of play. Chester got one of the runs back in the bottom of the first, but that would be their only run of the contest. It was all Nashville from the first inning on.

The Hornets got another run in the second inning on a RBI groundout from Parker that scored Blazier and put the game away out of reach in the third inning. Ten batters came up to the plate in the third inning. The inning featured three hits, a walk, two errors, a sacrifice fly, and a hit by pitch. Nashville capped off the inning with a solo home run from Baldwin.

Nashville would score one run apiece in the fourth and fifth innings to close out a 12-1 win in just five innings.

Parker started the game on the mound and gave the Hornets four strong innings. Parker gave up two hits, one earned run, and struck out eight batters. Baldwin pitched the final inning and gave up just one hit.

The Hornets final game of the week was another short game. The Hornets picked up their thirteenth straight game, a 14-0 win over Anna-Jonesboro in five innings.

Nashville led from the outset as they scored in the first inning and never looked back. Parker got the scoring started with a steal of home base to give the Hornets a 1-0 lead.

The Hornets added to their lead in the second as two more runs came across the plate. Parker was in the middle of the scoring again as his two-run single extended Nashville’s lead to 3-0.

Nashville would pile it on in the third inning. Two singles, three walks, and an error led to four Hornets runs and gave the Hornets a 7-0 lead after three innings.

The blowout continued in the fifth inning. After three walks to open the inning, Bultman hit a two-RBI single to put the Hornets ahead on 9-0. Bultman would score on an error later in the inning. Another error allowed Harre to score. Blazier would then single in another run to put the Hornets ahead 12-0. The final runs of the game would score on a double from Cole Malawy.

Coach Malawy talked about his team getting on a role. “Always good to win home conference games. Todd Jahnke was really good on the mound. I thought he was really sharp working ahead in the count. He was very effective. I don’t think Anna squared up many balls against him. Defensively we handled it for the most part, and are starting to play good catch. It’s not very often in the game that all nine starting players in the lineup score a run. We are definitely moving in the right direction offensively as well.”