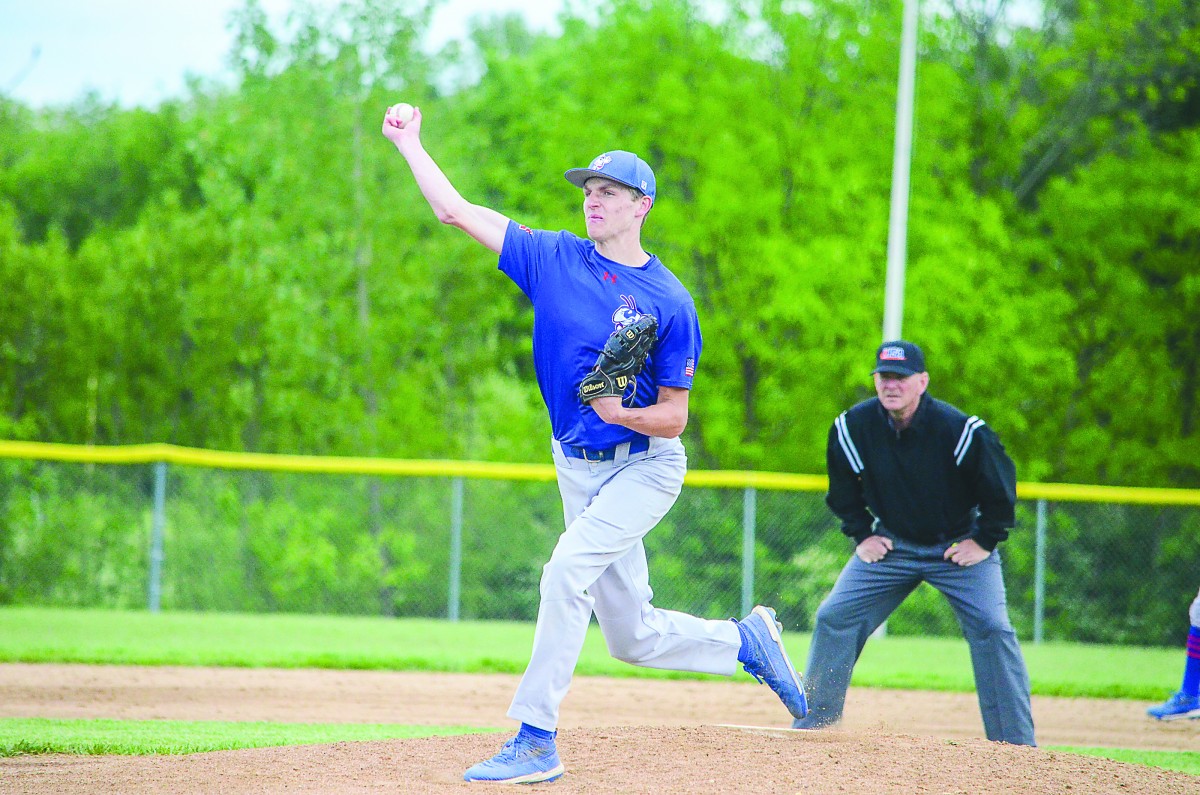 Bryce Bultman pitches during the Hornets loss to Highland on May 10.

The Postseason is right around the corner as the Nashville Hornets will begin their quest to Peoria on Wednesday in Red Bud. The Hornets won two of their three contests this past week as they defeated Washington County rival Okawville on May 6, and defeated Murphysboro on Senior Day on May 8. The Hornets lone loss of the week came against Highland on May 10.

It was a big second inning that pushed the Hornets past the Rockets on May 6. The Hornets scored eight runs in the second frame and cruised from there as they defeated Okawville 11-1 in five innings.

Nashville scored one in the first to get the scoring started. Back to back walks to Cole Malawy and Gavin Baldwin started the rally, and Nick Paszkiewicz came through with a RBI single to give the Hornets a 1-0 lead.

Things unraveled for Okawville in the second inning. Ian Blazier was hit by a pitch to lead off the frame. Blazier would come around to score on a fielder’s choice bunt by Todd Jahnke. Three bases loaded walks, and a bases loaded hit by pitch pushed the Hornets lead to 6-0. The big hit in the frame was off the bat of Tanner Bergmann who laced a three-RBI single to right to put Nashville ahead 9-0.

Okawville scored their lone run in the third on a wild pitch from Jahnke, but that was all Okawville could muster.

Nashville would score two in the bottom of the fifth, with the walk-off run being scored on a bases loaded walk from Kelton Harre.

After the game, Coach Chad Malawy talked about patience during the game. “I think we walked 11 times and got hit three or four. The walk is so valuable to the game of baseball and most people just are too proud walk or don’t like to walk. I don’t know. I think the walk is one of the missing elements of winning baseball. Fortunately for us it worked. On the scoreboard it looked like they had one or two more hits than us for the game, that’s because we didn’t get pitches to hit. I’m proud of our hitters for taking pitchers that were balls.”

Nashville finished with four hits on the day. Bergmann had one hit on the day, but it was a big one as it drove in three. Nick Paszkiewicz finished 1-2 with two RBIs and two walks. Blazier drove in a run, scored two runs, and walked twice. Bultman and Harre each drove in a run, scored a run, and walked once. Jahnke drove in the final run of the game, and was hit by a pitch twice. Cole Malawy finished 1-1 with three runs scored and three walks. Carson Parker finished 1-4 with a run scored. Jacob Rounds scored two runs in the win.

Jahnke pitched all five innings. Jahnke gave up one unearned run on four hits, and struck out nine batters.

The Hornets scored in every inning as they took down Murphysboro 10-0 in six innings on Mary 8. It was senior day for the Hornets, as the six seniors were honored before the start of the game.

Nashville got a great pitching performance from Carson Parker and took advantage of five errors from Murphysboro to take the win.

The Hornets scored a run in each of the first four innings to take a 4-0 lead early. A home run by Baldwin started the scoring in the first.  Patrick Combs singled home Bergmann in the second to double the lead. Bultman hit a sacrifice fly in the third, and Cole Malawy had a RBI single in the fourth to score Rounds.

Nashville did most of their damage in the final two innings. A bases loaded walk to Carson Parker, followed by a two RBI single off the bat of Cole Malawy put Nashville ahead 7-0 after five innings.

In the sixth, Zack Kempfer would single in the eighth run of the game. An error allowed the Hornets to push another run across the plate. The final run came in via a single off the bat of Cole Malawy.

Cole Malawy had a great day at the plate. Malawy drove in four runs on three hits, and scored a run. Baldwin’s lone hit was his solo home run in the first. Baldwin also walked twice in the contest. Kempfer finished 1-1 with a run scored. Bultman and Combs each notched a hit and a RBI. Parker did not record a hit, but walked and drove in a run in the win. Harre singled and scored a run for the Hornets. Bergmann walked twice and scored a run while Nick Miller crossed the plate two times. Rounds and Blazier each scored a run, while Paszkiewicz finished with a walk.

Carson Parker did not yield much on the mound. Parker went six innings, and gave up just two hits. Parker struck out four and walked one.

The final contest of the week was a game against Highland on May 11. The Hornets out hit Highland in the contest, but could not get the big hit when needed as the Bulldogs shut out the Hornets 5-0.

A pitcher’s duel throughout, Bultman went toe to toe with Highland through the contest. Highland took advantage of four errors by the Hornets on their way to the win.

Highland took advantage of an error in the first to get the scoring started as the Bulldogs scraped one run across to take a 1-0 lead after the first.

The score would hold until the third inning when another error by the Hornets led to the second run of the game for Highland.

The Hornets would get some great defensive plays from Harre, Blazier and Jahnke in the middle innings, but the Bulldogs broke through again in the sixth as another error by Nashville led to more runs. Highland pushed the three runs across the plate in the sixth, and put the Hornets down 1-2-3 in the top of the seventh to take the win.

After the game Coach Chad Malawy talked about Highland being a little bit better. “They beat us in all three phases of the game, which I just got done talking to the team about. I thought Bryce Bultman was pretty good on the mound, but their pitcher was just a little bit better. I thought our defense played pretty dang good baseball, but their defense was just a little bit better. Same way with the offense. They put a few more balls in play that found holes, and got the two out hit to drive in a couple runs when we didn’t. We just got beat in all three phases by a really good team. No one likes loses, but that’s a quality loss.”

Parker, Paszkiewicz, Harre, and Jahnke had the lone hits in the contest. The Hornets did not walk in the loss. Nashville struck out 12 times.