The Nashville Hornets baseball team won their fifth straight Regional Championship, in improbable fashion as the Hornets came back from a three run deficit in the seventh inning to take a 9-8 win over Red Bud on their home field. The Hornets ended the regular season with a win over Althoff before starting the postseason with a win over Chester. Nashville moves into Sectionals with a 29-6 record.

On May 13, the Hornets ended the Regular season with a dominating 12-0 win over Althoff in just five innings.

The Hornets took the lead in the first inning, as three straight hits, the last of which being a two run double from Gavin Baldwin started the home half of the first.

The game stayed 2-0 until the fourth inning when the floodgates opened. Ten runs crossed the plate. The first nine Hornets of the inning reached base. Carson Parker, Baldwin, Bryce Bultman, Tanner Bergmann, Ian Blazier, and Cole Malawy all had at least one hit in the inning. Todd Jahnke and Kelton Harre each were hit by a pitch in the inning. Malawy reached base via the walk. Nick Paszkiewicz reached on a fielder’s choice. By the end of the inning, the Hornets led 12-0.

Althoff went 1-2-3 in the top of the fifth as Nashville closed out the win.

Nashville began the postseason with an 11-1 win over Chester in Red Bud. The Hornets scored in every inning as they moved into the Regional Championship.

The Hornets got the scoring started as they loaded the bases with two outs in the first. Harre was hit by a pitch to force in the first run of the game.

Nashville added to their lead in the second as Blazier and Jahnke reached to open the bottom half of the frame. Parker then came through with a RBI single to put Nashville up 2-0. Malawy followed it up with a sacrifice fly to extend the Hornets lead to 3-0.

Four more runs came around to score in the bottom of the third. The first two on a double from Blazier that scored Bultman and Harre. Parker hit a sacrifice fly. An error and a double led to two more Nashville runs. At the end of the third, Nashville was in control of the contest as they led Chester 7-0.

Chester scratched across a run in the fourth, but the Hornets got that run right back in the bottom half as Jahnke drew a bases loaded walk. Parker would then be hit by a pitch to put the Hornets ahead 9-1.

An error in the bottom of the fifth, led to another run for the Hornets. Nashville walked off in the sixth, as a single from Paszkiewicz scored Parker to give the Hornets an 11-1 win.

Jahnke did not need much help on the mound in the contest. Jahnke struck out the first nine batters of the game. Overall Jahnke struck out ten batters in just four innings. Jahnke gave up two hits and one run. Boomer Harris pitched the final two innings and gave up one hit. Harris struck out three.

After the game, Coach Chad Malawy was amazed by Jahnke’s performance. “Jahnke was unbelievable in the game. He was ringing people up. He had command of all his pitches. Not just throwing them for strikes, but location was outstanding. That’s one of the best pitching performances I’ve seen from a Hornet. That was outstanding.

Thrilling. That was one way to describe the Hornets win over Red Bud in the IHSA Class 2A Red Bud Regional Championship game. Red Bud gave the Hornets all they could handle, but the Hornets escaped with a 9-8 win to move into Sectionals.

Red Bud jumped out to an early advantage. Four hits, and a walk in the top of the first, had the Musketeers on top of the top-seeded Hornets 3-0 after a half inning of play.

Red Bud held onto the lead until the bottom of the second when the Hornets’ bats came alive. Bultman doubled to lead off the home half, and Harre followed it up with a single. Bergmann drove in the Hornets first run of the game on a sacrifice fly. After a hit by pitch, the Hornets scored again on a fielder’s choice off the bat of Jahnke. A wild pitch scored Blazier to tie the game, and a double by Parker gave Nashville their first lead of the game. After two innings of play, the Hornets led 4-3.

The Hornets would cling to their one run lead until the bottom of the fourth, when they scratched across an insurance run. Baldwin would hit a sacrifice fly to right field that would score Malawy and give the Hornets a 5-3 lead.

Red Bud scratched across a run in the fifth to get back within one. At the end of five, Nashville led 5-4.

The score would hold until the top of the seventh. An error by the Hornets tied the game at five, and three batters later the Musketeers took a three run lead on a home run just outside the center field fence. The Hornets would limit further damage, but found themselves trailing 8-5 heading to the bottom of the seventh.

The Hornets stayed calm. Paszkiewicz crushed a double to center field to lead off the bottom of the seventh. Bultman would single in the very next at bat to cut Red Bud’s lead to 8-6. The Hornets would get back within one on an error. After the Musketeers got the second out of the game, Jahnke would be hit by a pitch to put the winning run on first. Down to their last out, Parker came up to bat. Parker would then triple to deep center scoring Nick Miller and Logan Eversgerd and the Hornets took the win.

After the game, Parker talked about his at-bat. “I was looking for a base hit, just trying to get that tying run in. Pitched it down the middle  and I put a good swing on it and it worked out.”

Nashville has had a knack for coming back in the postseason over the past year or so on the baseball diamond. Parker talked about it being part of the culture of the team. “One thing about this team. We fight to the end no matter what the score is. Just something that is in this program. Always fight no matter what.”

Hornets coach Chad Malawy was proud of his team after the win. “I’m so proud of them for doing that. I don’t know what it is about them that they stay calm and play well under pressure, because we aren’t use to losing, and we don’t lose but a handful of games a year. We take losses hard. When we get down, it would be really easy for this team to hang their heads, and that would be the norm, but they don’t do that. They showed some toughness. One thing I think we are is that we’re uncommon. I think what we do with the way we normally play good catch, we run, play the small ball. The things we do. I feel that we do things that are uncommon anymore in the game of baseball.”

Parker was the difference in the game. Parker went 2-5 with three RBIs. Bultman finished with a team high three hits. Bultman scored two runs, and drove in one. Malawy and Harre each finished with two hits and a run scored. Baldwin finished 1-3 with a RBI. Jahnke and Bergmann each drove in a run. Blazier and Miller scored one run. Eversgerd scored two runs.

Nashville will play Fairfield in the Sectional Semi-Finals on May 22 at 4 pm in Benton. 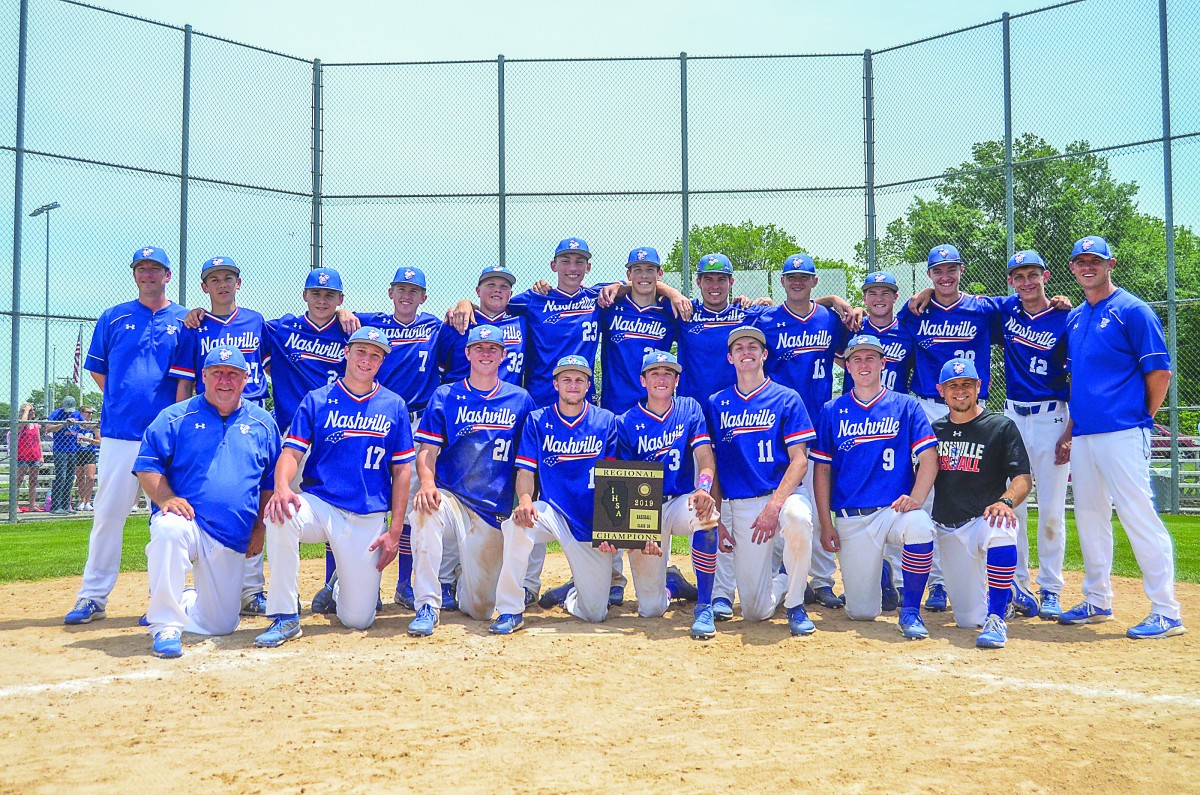