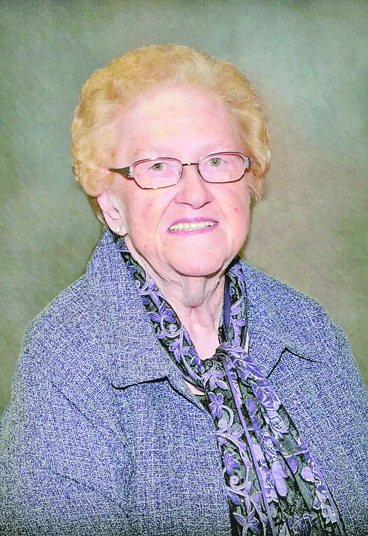 Marian Elise Schmitt, 90 of Nashville, passed away at 2:03 p.m. on Thursday, July 11, 2019 at Washington County Hospital in Nashville.

She was born on September 26, 1928 in Addieville, the daughter of Carl and Mary Jollenbeck Randoll.  She married Roger Edwin Schmitt on September 7, 1947 at St. Paul United Church of Christ in Nashville and he passed away on May 9, 2012.  Also preceding her in death were her parents and 5 brothers; Clarence, Alvin, Rudy,Carl, Jr. and Norman.

Marian was a bookkeeper and reporter for the Nashville News which was owned by her husband’s family.  She was a long time member of the St. Paul United Church of Christ in Nashville where she was active in the Dorcas Circle and taught Sunday School. She was a 70 year member of the American Legion Auxillary, was a member of the Washington County Hospital Auxillary, former Girl Scout leader and girls softball coach and served as a Republican Election Judge for 45 years.  She enjoyed bowling and playing cards.

Funeral services will be held at 10:00 a.m. on Monday, July 15, 2019 at the Styninger Funeral Home in Nashville with Rev. Beverly Kahle officiating.  Burial will follow in the St. Paul United Church of Christ Cemetery in Nashville.  Friends may call from 5:30 to 8:00 p.m. on Sunday and from 7:30 a.m. until service time on Monday at the funeral home.  In lieu of flowers, memorial contributions may be made to the St. Paul UCC Cemetery or Siteman Cancer Center for Ovarian Cancer research.