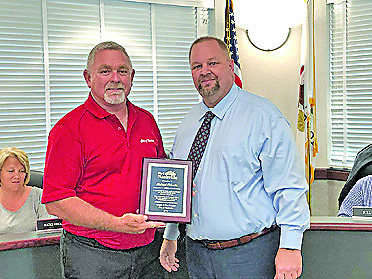 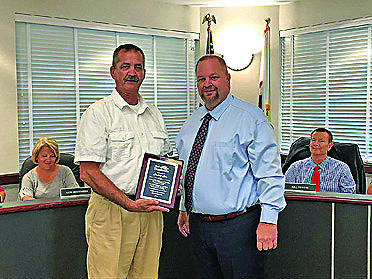 The Nashville City Council presented plaques to a pair of streets department employees during its regular meeting on Thursday, July 11.

“That’s 80 years of experience leaving the city,” Rolf said. “We are going to miss you guys.”

Schuette said he will remain on hand through December. The council also approved Logan Gill of Nashville as the interim streets supervisor. Gill is a 2009 graduate of Nashville Community High School.

Schuette said he is appreciative of his time working with the city.

“You have always been open minded to all of the suggestions that I have,” Schuette said. “It’s been a good working relationship.”

Rolf said he was especially thankful for Schuette’s assistance in his four years in city government.

In other streets department news, the council approved the purchase of a Ford F-150 truck from Holzhauer’s Auto Mall. The truck replaces a previous vehicle that had been involved in a recent accident in front of the courthouse, and reports from the insurance company indicated that truck is expected to be totaled.

Holzhauer’s had the low bid at $29,930.81. The council approved the purchase minus any amount the city will receive after the insurance claim has been processed.

The June recycling report totaled 232 residents who used the service. The amount collected came to 11,460 pounds or 5.73 tons.

The city agreed to purchase 100 water meters at approximately $137 per meter. The touch-screen technology is expected to be an upgrade from the previous meters.

The council also agreed to institute a lifetime membership to the Nashville Golf Course for all eligible retirees from the city with more than 40 years experience. Schuette and Lietz will be the first to enjoy this new perk.

The next city council meeting is set for Thursday, August 1.