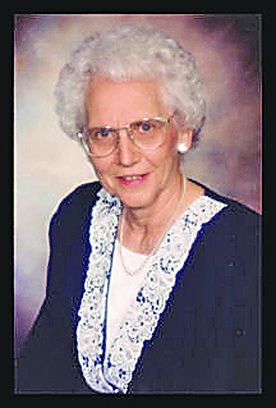 Mary Joanna was born to John Elwyn and Edna Joanna (Adams) Carson on April 24, 1928, on a farm East of Oakdale, IL.  She was united in marriage to William Jewel Richards on May 27, 1949, by her uncle, Rev. Melville K. Carson, in the Reformed Presbyterian Church in Oakdale.  She and her husband, Bill, were married for 70 wonderful years, and he survives her passing.

She was preceded in death by her parents, a brother and sister-in-law, Preston and Jane Carson and sister and brother-in-law, Eileen and William Auld.

Funeral services will be held at the First Presbyterian Church in Nashville, IL on Wednesday, July 17, 2019 at 11 AM with Pastor Phil Carson officiating.  Interment will follow at the Masonic Cemetery in Nashville, IL.

Friends may call at the First Presbyterian Church in Nashville on Wednesday from 9 AM until the service hour.

Should friends desire, memorials may be made to the First Presbyterian Church or the Masonic Cemetery and will be accepted by the Campagna Funeral Home, who is assisting the family with arrangements.