The role of the community college is evolving, and those involved are  hoping to get a certain message across.

Former NEC Director Ruth Barczewski retired from her position on June 30. It was the second tenure for Barczewski, who retired in 2001 as dean of Community Continuing and Learning Resources.

Barczewski, who started with the college in 1967 as a receptionist, said she has seen several changes over the years. She said she worked on the grant to get the first fax machine at the campus.

“I’ve worked for every president the college has ever had, including interim presidents,” Barczewski said. “I’ve seen a lot of things evolve. When I started out at Shattuc Road, we had wooden sidewalks. Sometimes it rained so hard faculty would roll up their pant legs and they would wade through water.”

Barczewski said she plans to spend time with her family, especially with her new grandson.

Looking back over her tenures at KC, Barczewski said her favorite memories are the times she was able to witness the impact the college has had on its students. The college has helped those who were sick get their mind off their illness because they could take telecourses while they were able to get treatment.

“One of my favorite stories and one that make me tear up the most,” she said. “I was involved with getting the Reading Link grant. One of the things, a father said when we went throughout the program, now I’m going to go home and read to my son. It still makes me tear up. I remember my son Paul coming home from kindergarten sitting on my lap and saying ‘Mom, I’m going to read to you now.’ You don’t realize the impact you have with these things until you experience and you relate to it personally.”

Going forward, KC is looking for public input in a survey that was launched on July 15. Boehne explains that the college is seeking out how it can better reach its community.

Evening Coordinator Elyse Rench, who graduated from Nashville Community High School in 2002, came aboard in June, and she will be overseeing new programs. Rench said there are several courses and KICK classes that will be offered later this fall.

Rench had previously worked at McKendree University as an admissions counselor and assistant director of undergraduate admission. Rench will also be able to provide student services during the center hours from 7:30 a.m. to 9 p.m. weekdays.

“I am excited because it gives me the opportunity to give back to the community that I feel made me into the person who I am today,” Rench said. “It helped shape me and mold me into the woman that I am and this is a beautiful center.”

Whether it is for finishing a degree program, advancing one’s knowledge or hosting a civic organization, the staff at Nashville Education Center wants the public to know it is there to serve.

“It’s amazing now how people can get their education,” Barczewski said. “It opened the doors for so many.” 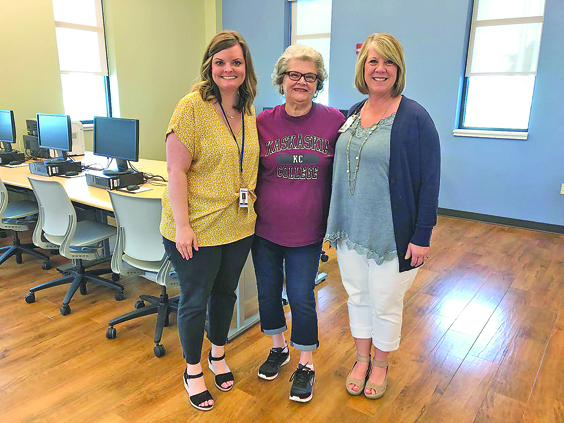