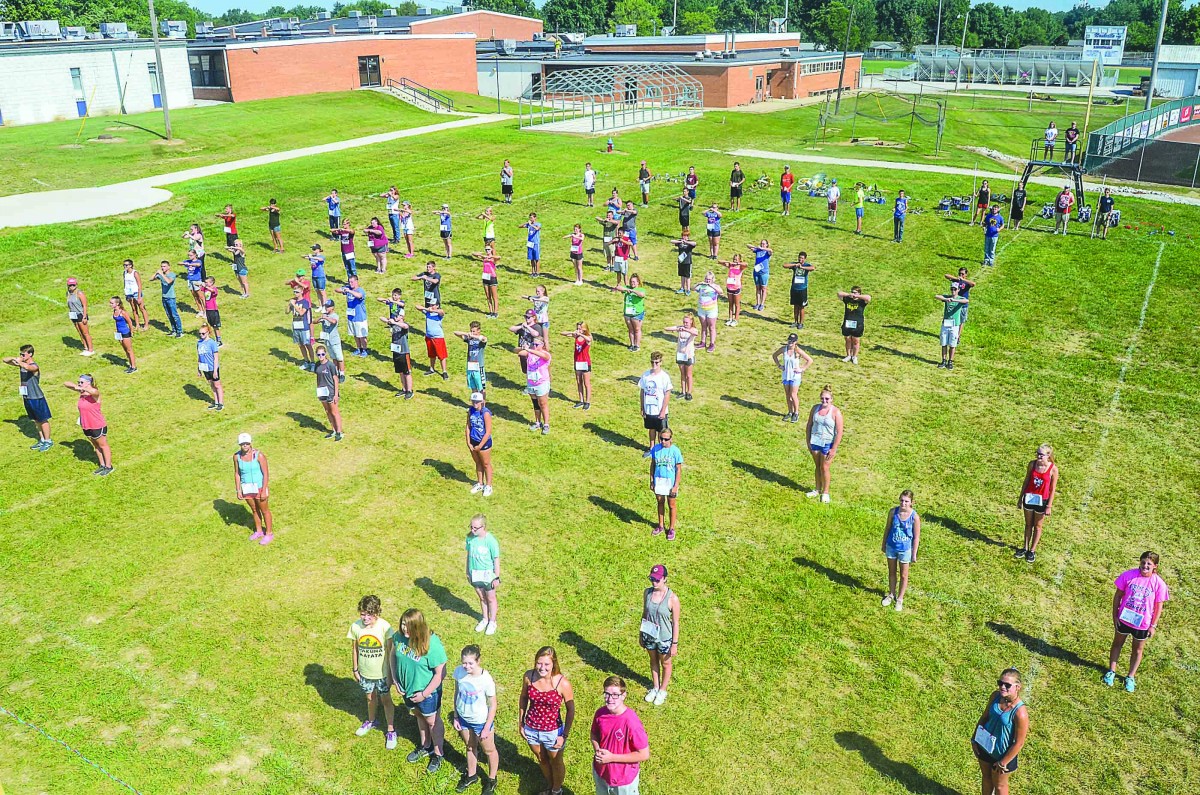 The Nashville High School band is ready to rock. This year the band will be blending the sounds of Beethoven and Queen. The Hornet marching band has a busy schedule this year, as they will travel to competitions at EIU, Carterville, and O’Fallon as well as play during every Hornets home game this season.

NCHS Music Director Steve Browne talked about this year’s show. “The theme is Classic Queen. It is taking music from Beethoven, and Queen, and mixing them together. The first two songs that are being played are Moonlight Sonata by Beethoven, and Bohemian Rhapsody by Queen. Then it goes into Fur Elise by Beethoven and Somebody to Love by Queen. The last two songs are Ode to Joy, and Bicycle Race.”

This year the band has 95 members, aided by a large freshman class. “95. We have a huge color guard, and we have a really big Freshmen class. The Freshmen class we have is the biggest one we have had in six years. That’s kind of exciting, and a challenge at the same time. They are the ones that really don’t know how to do all the things, and need the most instruction. We will have to deal with that all year long, but I think they are going to be ok because they respond well, they learned a ton in camp, they seem to be doing ok.”

The sun, not the heat provided the biggest obstacle during this year’s band camp. Browne talked about the sun bearing down on the band everyday. The temperature was fine, but a cloudless sky presented a challenge.

One big change at this year’s band camp was the use of the practice field, which is situated between the school and the Hornet baseball field. Browne talked about the benefits, and challenges of the practice field. “That’s the biggest thing is that our equipment is right there in the unit, and we can just take it out and set it up rather than going all the way up the hill, then setting it up. That’s the thing that helped us the most. The biggest challenge is that it is a smaller field. We didn’t anticipate the big color guard, so the color guard is actually spanning further than what the field allows. The band is pretty much contained in the field, and that’s good, but with those six foot poles, you need room. So we decided that we would spread them out so they would have that room.”

As for props, the Hornet band has a few different things on the field this season during their performance. “We have a grand piano. That is going to stay stationary in the front of the field. We have two people who come up and play solos on that piano. Then there are other solos and ensembles that go around the piano. There is a flute solo, a trumpet solo, two piano solos, and a brass quintet that play up by the piano. Then we also have these little octagons that are going to move on the field. We are going to make them look as the rigging for concert venues. Things you would hang speakers and lights on. We are going to have lights on them. LED lights that we think will show up in the sunlight. There is also going to be some shooters that shoot streamers attached to those things.”

The Hornet marching band has a busy schedule this year, that includes a trip to Eastern Illinois University, O’Fallon, Carterville, and Pinckneyville along with four home NCHS football games, and the NCHS homecoming parade. Browne talked about what he is looking forward to the most. “As far as football goes, I loved watching us beat DuQuoin. I really like when A-J is at home. Those big games, I like being down in the endzone for. I love being down in the end zone for all the games, but those are really exciting.” Browne went on to say, “as far as performing goes, Homecoming is cool because we do it after the game, and last year the football team came out and watched us. That was really cool for the kids. It seemed like all the parents were still in the crowd, when the game was over, so that was cool.” Browne closed it out by saying, “as far as competitions go, the most exciting one is the first one we do which is in O’Fallon because the best bands are there. It’s fun to compete against those high quality of bands.”

Nashville will not be making a trip to a bowl game this year. Last year the band played the Sugar Bowl in New Orleans. Browne says he plans on trying to go to a bowl game once every four years. Browne also stated that the band travels so much, he does not want them to overtravel. “I don’t want to overtravel to where parents are trying to raise so much money so their kids can go to the travel events.

One thing is for sure, on Friday nights at Hornet field, you will find the band in the endzone, making as much noise as they can, trying to cause problems for opponents while cheering on the Hornets. “We used to be up in the bleachers. There was some discussion if we really need to be up there behind the football team. When we are right behind our own football team making a bunch of noise, that’s giving us a disadvantage. Tim Kuhn was actually the one who asked if we could go to the endzone and just cause as much havoc as we can, which of course I was all for. Our kids love it. We name a leader down there, to lead all the cheers. The first football game, I will name somebody that will come out in front of the band and lead all the cheers.”

The Hornet football team will have just four home games during the regular season the next two years before the IHSA adopts districts in 2021. “It affects us, because we don’t play until the third week. We don’t have those games to actually try our show out for crowds before our first competition. Our first competition is the day after our first game. That makes it difficult, because there is no time to fix anything before we compete

The halftime performance will take seven minutes and 45 seconds. Browne says he does not expect the band to play the full performance at a football game until around homecoming. The first two games, fans should expect about ⅔ of the show to be performed.

This year’s drum majors are Micah Arnold and Lindsay Gossman. Arnold will serve as the head drum major this season.