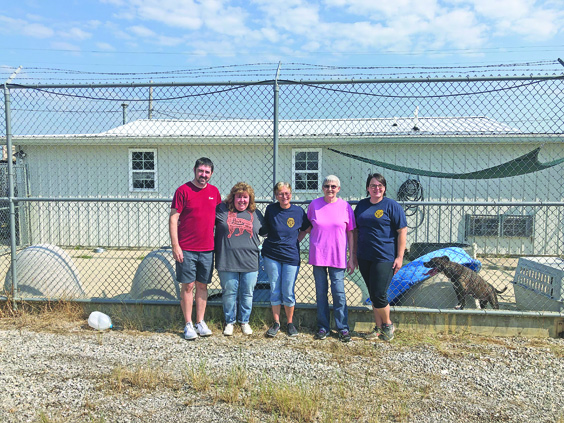 Scott Waterman, left, of Collinsville presented the Washington County Animal Control with a $4,000 donation Monday morning. The money was raised by Waterford’s followers and it will go toward providing a shaded spot for the dogs during the summer months. Also pictured from left is Shannon Moore, Warden Deb Hagopian, Washington County Parnters for Pets charter member Marcie Willis and Animal Control employee Jamie Brown.

Scott Waterman of Collinville helped raised $4,000 through donations from his online and local community. The funds will go toward installing a roof over the big pen area as well as building an outdoor cat room for the kittens to get some fresh air and sunshine.

How a crafting community became involved dates back to Good Friday, when Shannon Moore was leaving her subdivision and noticed an older stray puggle weave in and out of traffic. Moore and Washington County Animal Control Warden Deb Hagopian spent a lot of time and effort trying to catch the dog. Hagopian spent a total of seven hours before the pup was finally caught.

Impressed by Hagopian’s efforts to care for the animals in the county even on her time off, Moore wrote a letter to the editor to the Nashville News, and her husband posted a copy online. Waterman said he saw his friend’s post and was inspired to come up with efforts to help out the shelter.

“We were gearing up for our second annual crafter’s convention in Collinsville, and we were looking for a fundraiser,” Waterman said. “Once I saw the post, I knew we were going to do it for Washington County Animal Control.”

The convention was held this past June, and Waterman and his nearly 30,000 followers were able to raise the funds needed for the shelter in less than an hour. Some of the followers are from other countries, like the United Kingdom and Indonesia.

Waterman also brought in several blankets, toys, treats, food and other items that were collected for the animals at the shelter.

In addition to his Facebook community at Design With Scott, he owns and operates Waterman’s Loft in Collinsville. Waterman said he believes in the importance of reaching out and giving back. He said his community is ready and willing to pitch in and help those in need.

The community that follows Waterman continues to show up in a big way. Previous fundraising included collecting donations for a food pantry and 5,000 socks for children who have been diagnosed with childhood cancer.

For Washington County, one person donated $1,000 to the shelter to ensure that the proceeds would be funded.

“We love building community,” he said. “That is one of our main things, building an online community and building a local community. Giving back and helping, it is just something that is in our nature. It is something that we want to do.”

Hagopian said when she first heard the news of the donation, it took her a moment to comprehend what the gift could mean for the shelter. She was able to think of a project that needed to be done but could not be completed due to budget restraints.

“It is just amazing,” Hagopian said. “I am still in shock.”

The roof on the big pen will allow the shelter to use the space during the summer months. Because there was no shade, the dogs had to be kept in cages during the recent heat wave.

Many of those involved with the shelter said they were thankful for the generosity that was shown to them through the contributions.

“When I first got the text from Shannon, I probably cried for the next 48 hours,” Hagopian said. 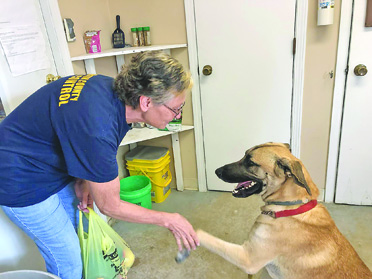 Warden Deb Hagopian bids farewell to German shepherd mix Maverick after he was adopted from the shelter Monday morning. 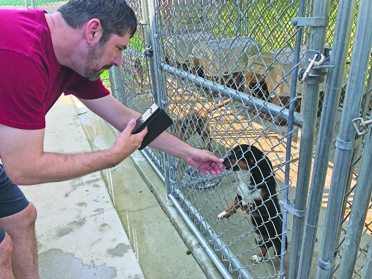 Scott Waterman greets some of the animals at the Washington County Animal Control before posting a live update.