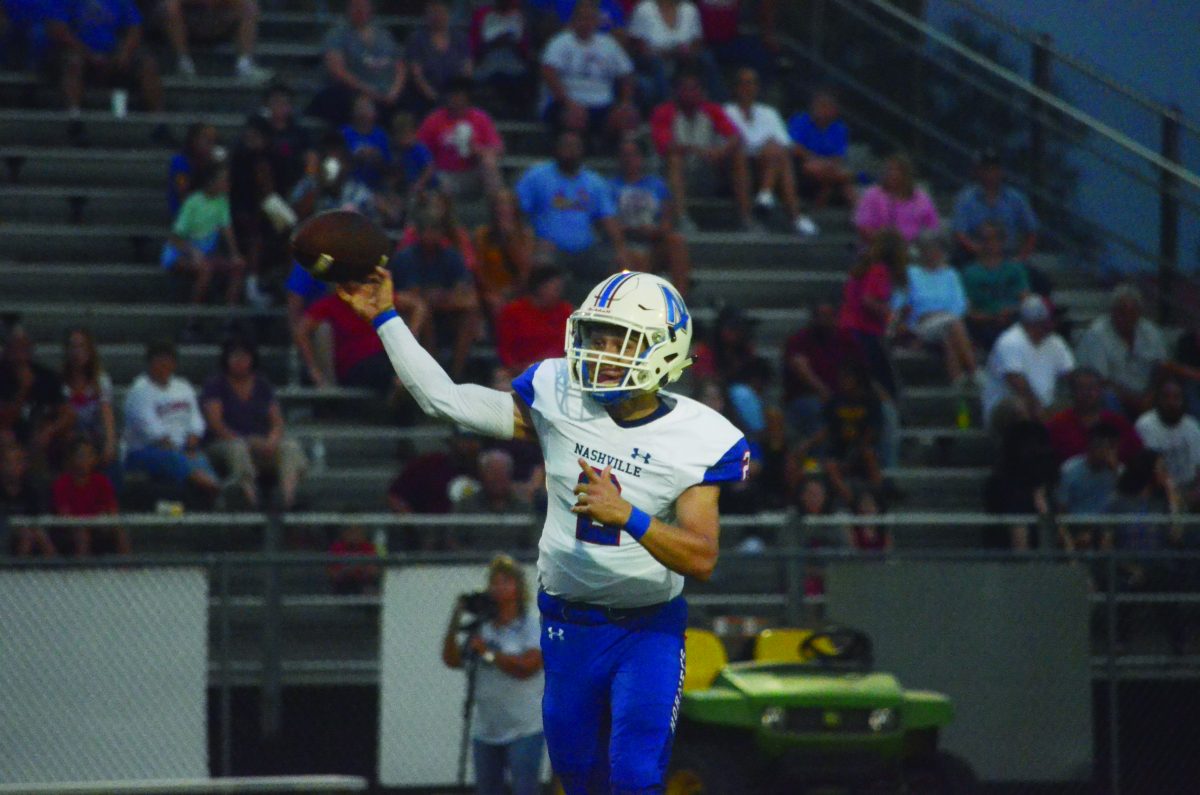 Cole Malawy tied the NCHS School Record with five touchdown passes in the Hornets win over Massac County on September 6.

For the second straight week, the Nashville Hornets football team put up more than 60 points on their way to victory. The Hornets dominated Massac County, as they defeated the Patriots 63-34. Nashville is now 2-0 on the season heading into their first home game of the year against Wesclin on Friday night. The Hornets will begin Conference play in Week four as Anna-Jonesboro comes to Nashville.

Nashville got the scoring started early as Nick Miller took the opening kickoff 86 yards for a touchdown. It was the first kickoff return for a touchdown since Bryce Harre during the 2010 season. New Nashville kicker Cristian Ocampo added the extra point to put the Hornets ahead 7-0.

After a quick three and out, the Hornets would find the end zone again. Cole Malawy connected with Isaac Turner on a 25 yard touchdown. Ocampo’s extra point would put the Hornets ahead 14-0.

A quick score by Massac County cut the lead in half, but Nashville would quickly score again. Jullian Metcalf found the end zone from 16 yards for the Hornets third touchdown of the game. Ocampo’s extra point gave Nashville a 21-7 lead.

Rhyker Rees would recover a fumble on the ensuing Patriot possession giving the Hornets the ball in Massac County territory. Five plays later Malawy and Miller would connect on a 16 yard score with 2:23 left in the first quarter. Ocampo’s fourth extra point of the quarter gave Nashville a 28-7 lead.

Miller would score his third touchdown of the game three plays into the second quarter, a 20 yard run on a reverse. Ocampo again converted the PAT to give Nashville a 35-7 lead.

Long runs plagued the Hornets defense as Massac County got their second touchdown run of over 70 yards on their next drive to cut the lead to 35-14.

On Nashville’s next drive, the Hornets drove right down the field, with Luke Ehret capping off the drive with a 13 yard touchdown run. Ocampo’s extra point pushed the lead to 42-14.

The two teams were not done scoring before the break as Nashville scored their seventh touchdown of the first half with 1:58 left before halftime. Malawy found Turner for a seven yard touchdown on fourth and goal to extend Nashville’s lead. Ocampo’s extra point gave Nashville a 49-14 lead.

Massac County would get another touchdown run of over 70 yards to cut the Nashville lead to 49-21, but again the Hornets answered. Malawy connected with Gavin Baldwin for a 53 yard touchdown with less than a minute remaining in the second quarter to push the lead to 56-21 after Ocampo’s extra point. The two teams would head into halftime with Nashville firmly in control.

The Hornets took their foot off the gas in the second half as they scored their final points of the game on their first drive of the third quarter. Malawy connected with Jaxon Goforth on a 6 yard touchdown. Ocampo added the extra point to put Nashville ahead 63-21.

Massac County returned the kickoff to the endzone to cut the lead to 63-28 with 8:03 left in the third quarter.

The final score would come with just 2:10 remaining as the Patriots punched the ball in for another touchdown. When the clock hit zero, the Hornets had the lead 63-34.

After the game, Coach Stephen Kozuszek talked about the win. “Outside of those three long runs, you have to be happy with the effort. I thought we were really solid defensively. Showed a lot of grit. We controlled the line of scrimmage. On offense, we showed our big play capability. A lot of different kids touched the ball tonight. Bailed ourselves out of a couple third and long situations. I was happy with the performance.”

Hornets kicker Cristian Ocampo set the NCHS School Record for made PATs in a game with nine. The previous record was held by Colin Laws and Brian Piasecki with eight apiece.