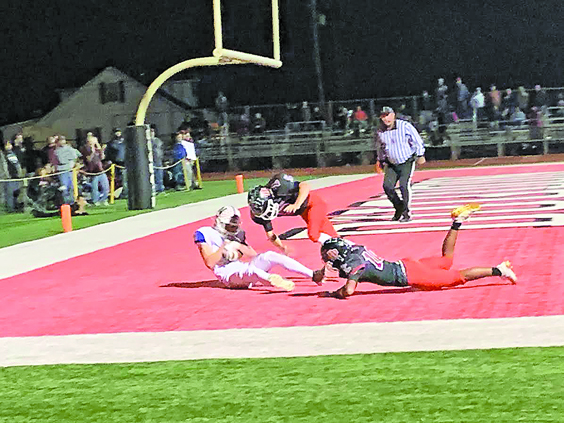 In a battle of two undefeated teams, the Hornets came back to Nashville Friday night defeated after a 41-35 loss to DuQuoin. The scoring started early for DuQuoin as quarterback Alex Zimmerman found Kadin Mays for a 42-yard touchdown pass. Three minutes later Zimmerman connected with Ethan Zettler for an 80-yard touchdown. Nashville was able to answer quickly, scoring on their first drive of the second quarter courtesy of a 4-yard touchdown run by Julian Metcalf. DuQuoin was able to counter with another touchdown pass from Zimmerman, this time to Wade Roberson. The Indians were able to tack on one more score with 16 seconds left in the first half as Zimmerman threw his fourth touchdown of the half to his fourth different receiver, this time to senior Jacob Green for 13 yards. Zimmerman completed a pass to seven different players. Nashville went into the locker room trailing 27-7. It was an uncharacteristic first half for the Hornets who turned it over three times, all coming via interceptions.

“The fact that we couldn’t establish a running game in the first half was probably the biggest difference, and we were forced to throw it, and their skill guys in their secondary presented some touch match-up problems for us,” Coach Kozuzsek said.

The second half started much of the way as the first half did. The Indians scored fourty seconds into the half, coming on a 64-yard run from Zettler. Zettler finished the game with 148 total yards. The score was 34-7 before Nashville answered the DuQuoin touchdown by way of another Julian Metcalf touchdown run, coming from 2-yards out, putting the score at 34-14. Metcalf finished the game with 55 yards and two touchdowns. DuQuoin then scored on another Zettler run, putting the score at 41-14. The Indians put up 482 yards on the game. The Zettler touchdown was the last time DuQuoin would find the endzone, as Nashville’s defense put the clamps on. Coach Stephen Kozuzsek was impressed by the overall play of the defense.

“Our defense did a good job, played strong too in the second half,” Kozuzsek said.

Nashville continued to show resiliency, scoring less than two minutes after the last DuQuoin touchdown. Cole Malawy was able to connect with Gavin Baldwin for the 10-yard touchdown catch cutting the lead to 41-21. Baldwin finished the game with six catches for 73 yards and one touchdown. The offense continued to find their groove as Malawy found Isaac Turner for an impressive 16-yard touchdown catch, pulling the Hornets to within two scores, 41-28. After the Hornet defense forced a quick three-and-out, the Hornet offense was set up in great field position. The offense was able to take advantage of the field position, as Malawy found Turner once more for another big-time touchdown catch with two minutes remaining.  Turner finished the game with six receptions, two of them touchdowns, and 101 yards. Malawy finished the game with 218 passing yards and two touchdowns. Kicker Cristian Ocampo was also perfect in all his extra point conversions. The Hornets were able to make an inspiring fourth quarter comeback, but the early deficit was too much to overcome as DuQuoin was able to run the clock out on their final possession.

“You have to like our resiliency though, our backs were against the wall, we showed a lot of fight, we gave oursleves a chance,” Coach Kozuzsek said.

With the loss being the first of the season, Coach Kozuzsek expects his team to bounce back next week.

“They’re going to respond, you can see it in their eyes, they’re disappointed, they expect to win,” Coach Kozuzsek said.

The loss brings the Hornets to 7-1 on the season. The Hornet football team will be back in action Friday night when the play host to West Frankfort in their final home game of the season.