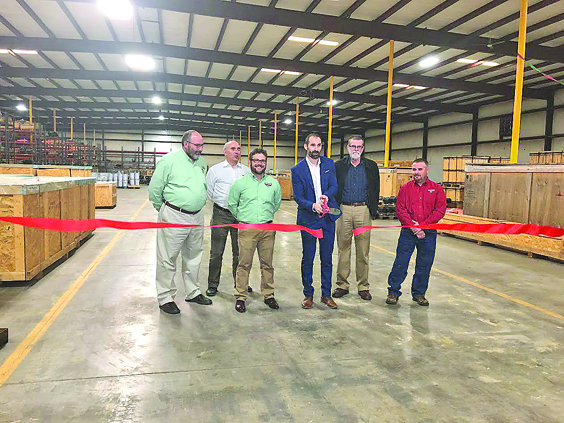 Montabert celebrated the grand opening of its 50,000 square foot distribution and custom care center in Nashville. The facility helps the country reach its customers based on the East Coast and Midwest with quick shipping options. Pictured from left are Greg Clinton, Bruno Mallen, Aaron Scarfia, Stephane Giroudon, David Young and Clint Bauza.

An international leader in the design and manufacturing of hydraulic rock breakers and related attachments unveiled its new national distribution and custom and care center in Nashville at a grand opening ceremony on Friday, October 25.

“This distribution center allows our planning and inventory management teams to be housed in one location, ensuring the highest level of service for customers,” said Stephane Giroudon, director of sales for the Americas at Montabert.

The Nashville facility has given the company the ability to stock 33 percent more product and provide same-day shipping on in-stock items, Giroudon said.The location works well to serve Montabert’s East Coast and Midwest customers, which means a quicker turnaround time for the orders that are placed nationally.

Montabert had initially began looking for a location a year ago, and representatives said they were unsure of where they would land. The company had working relationships with both NOTS and Komatsu Mining Corporation, and once the space opened up after NOTS constructed its new building.

“The synergy of having these two places came about, and it just made sense to do that,” said David Young, global manager of Komatsu. “And we were able to have it become accomplished in a really short time frame.”

Originated in Lyon, France, Montabert has become a worldwide leader in the design and manufacture of hydraulic attachments and drilling equipment as well as pneumatic equipment. It invented the world’s first hydraulic concrete breaker in 1964, and it has remained in the forefront of the industry. Its products are now available through more than 200 dealers worldwide.

Montabert is also currently establishing a remanufacturing facility in Chattanooga, TN, and planning to open a new facility in Elko, NV, to reach its customer base on the west side of the US.