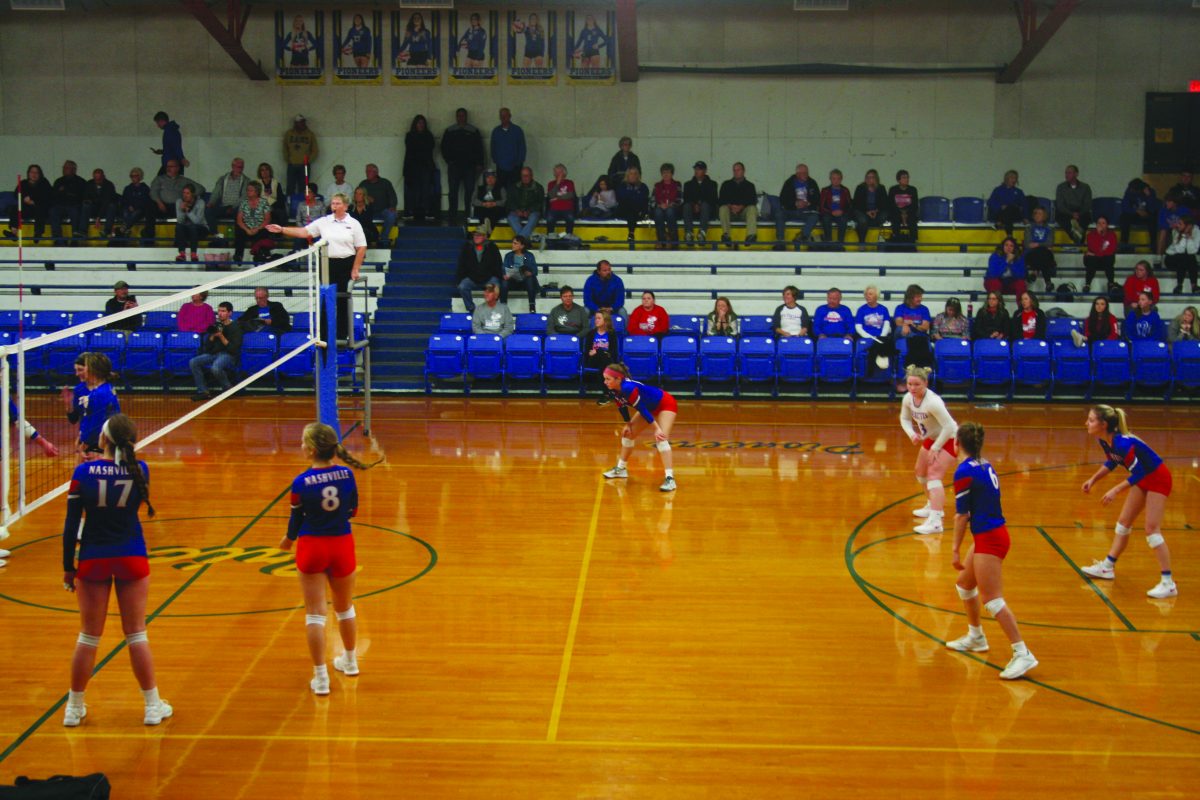 The Hornettes began their postseason surge Tuesday when they took on the host team of the regional, the Trico Lady Pioneers. Nashville came into the regional as the highest rated seed, Trico as the fourth. Although the Hornettes never trailed in the first set, Trico was able to hang around and make life difficult for Nashville. The Hornettes were clinging to a 19-18 lead before head coach Josh Konkel called a timeout. Nashville responded by closing the game on a 6-1 run, taking game one 25-19.

“I thought they answered pretty well, they were more aggressive taking it to them, so that was a big key,” Coach Konkel said.

Nashville kept the momentum rolling into the second set, dominating from the start for a 25-11 victory, advancing to the championship round.

“We picked up our intensity, we were a little more aggressive, and we were able to take control early and keep control,” Konkel said.

Delaney Varel and Hazel Konkel led the Hornettes with six kills a piece. Sydney Schnitker and Addi Gale contributed three and four, respectively. In the assist category, Abby Grabowski led the way, finishing with 13. Emily Schnitker also had 8. Raqui Elliot and Abby Wesselman tied for the team lead in digs with 11. Every Hornette player attributed at least one service point.

“We’re going to have to get it to our setter, where we can use all of our hitters and be aggressive because it’s going to be hitters galore,” Konkel said.

During the first set, the Lady Midgets were off and running. They jumped out to a 6-1 lead which forced an early timeout by Josh Konkel. Nashville was never able to get within five points of Freeburg, and they eventually lost the first set 25-17. After suffering defeat in the first set, it was a win or go home set number two for the Hornettes. There were several times where the Hornettes pulled to within one point, but they were never able to grab a lead.

“We had a couple signs where we showed we were going to play like we can, but all-in-all the execution was not there tonight,” Konkel said.

On Tuesday the Hornettes started off sluggish in their first set against Trico, but after a Coach Konkel time out the Hornettes poured the Lady Pioneers. Against Freeburg, Coach Konkel called timeout trailing 16-12 and 23-17, but unfortunately Nashville was not able to have equal success out of the timeout, and eventually fell short 25-20.

“We made mistakes, we didn’t make Freeburg earn enough points early on, and we just had a hard time recovering from it,” Konkel said.

Delaney Varel finished the match with a team leading six kills and had one blocked shot. Addi Gale had four, Hazel Konkel had three, and Taylor Rapp and Sydney Schnitker each contributed one a piece. Abby Wesselman finished with nine digs while Sydney Schnitker finished with four. Abby Grabowski and Rapp each had three and Raqui Elliot added two more.

As Freeburg hoisted the Class 2A Regional Championship plaque, Coach Konkel had nothing but high praise for his team.

“I’m always proud of them, they’ve given Nashville volleyball a lot of fun times, and a lot of wins,” Konkel said.

The Hornettes will graduate eight seniors, an accomplished group that Coach Konkel describes as “hard to replace.”

Although they were not able to advance to sectionals, there were plenty of high points for Nashville this season. They finished in 2nd place in the Benton Rangerette Classic, 1st place in the Freeburg Monster Mash Tournament, and share the 2019 SIRR Mississippi title with Freeburg. Their overall record on the season was 28-9.