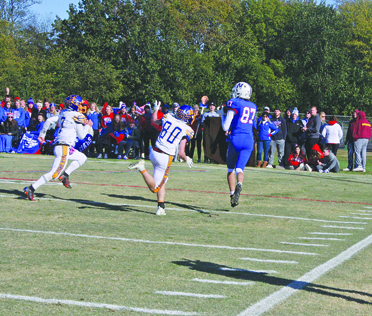 A chilly, windy day in Nashville was the setting for Saturday’s 2A first round playoff clash between the Hornets and the Blue Devils of Villa Grove. Nashville came away victorious with a 35-0 shutout of the Blue Devils. On the first drive of the game the Hornets were aided by two consecutive 15-yard penalties and managed to cap off the drive with a three-yard Julian Metcalf touchdown run. On Villa Grove’s ensuing drive, Nashville was able to recover a fumble, giving their offense a short field.  Later in the drive, Metcalf found the end zone again for another three-yard score, extending the Nashville lead to 14-0 in the first quarter. Metcalf exited the game early due to injury, but he still managed 12 carries for 55 yards and 2 touchdowns. After backup Luke Ehret went down, the Hornets would rely on sophomore Connor Gladson to shoulder the load. Gladson made his presence felt early as he padded the Nashville lead with a 4-yard touchdown run, giving Nashville a 21-0 lead midway through the second quarter.  Nashville ran the ball 43 times for 161 yards. The weather conditions did not favor a consistent passing game, but that did not apply to Cole Malawy on Saturday. With 37 seconds left in the first half Malawy connected with Jaxon Goforth for a 32-yard touchdown. After the Cristian Ocampo extra point, the Hornets would carry a commanding 28-0 lead into the locker room at halftime. After a scoreless third quarter, Nashville would find the end zone in the fourth, this time coming courtesy of a leaping 5-yard touchdown catch from Isaac Turner. The impressive catch padded the Nashville lead 35-0. Malawy completed 23 of his 36 passing attempts for 293 and two touchdowns. Gavin Baldwin did not find the end zone but was still heavily relied on, finishing the game with 7 catches for 117 yards. It was a strong performance from Nashville’s defense, as they were able to hold the Blue Devils to a modest 30 rushing yards. They were also able to contain quarterback Blake Smith which was something Nashville head coach Stephen Kozuszek stressed would be a key to winning the game.

“Our defense was great; we did what we needed to do and were able to put pressure on their their quarterback all day, ” Coach Kozuzsek said.

The win over twelve seeded Villa Grove put Nashville at 9-1 on the season. They will continue their playoff push Saturday at 2 p.m. when they travel north to take on powerhouse Bismarck Henning. 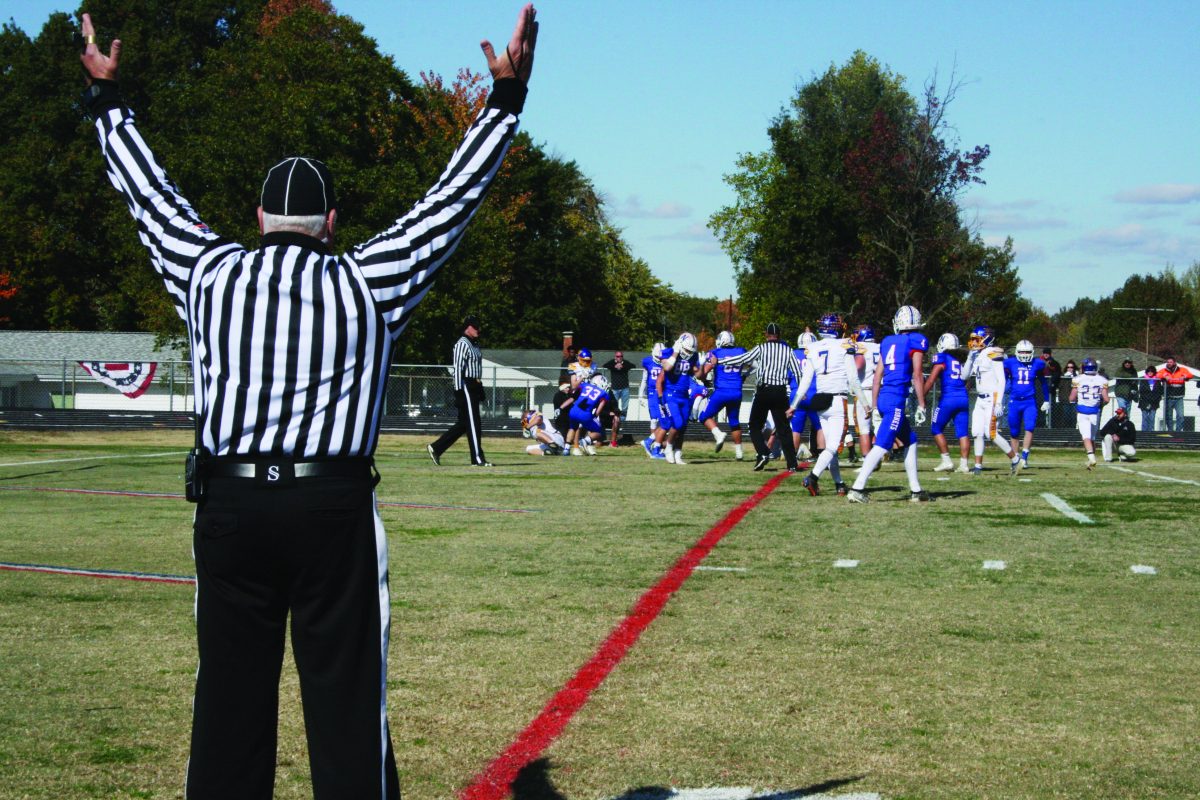 Above: The referee signals a Julian Metcalf touchdown which put Nashville up 7-0.