A local woman and former Nashville Community High School athlete has taken her love for running and found a new passion – helping children with cancer and their families.

Reena Peppenhorst has organized fundraisers in anticipation for the upcoming run for St. Jude’s Children’s Hospital. Recently, she was able to surpass her own goal at a benefit she set up at The Blue Room in New Minden.

Peppenhorst, who graduated NCHS in 2010 and was a member of the cross country team, said she was first introduced to St. Jude’s Children’s Hospital, when she was young. Some teacher friends of her mother had been raising money in memory of a mutual friend.

Peppenhorst was looking for half marathon to participate in, and when she came across the race for St. Jude, she knew what she wanted to do.

Peppenhorst ran in her first half marathon in 2016. She described the experience as an amazing experience.

“It really struck a chord with me. When you run through, there are signs that say ‘Don’t give up’ and ‘You are almost there,’” she said. “It was incredible.”

The St. Jude Memphis Marathon weekend is a one-day fundraising event where runners from all over the country participate in a marathon, half marathon, 10K or 5K. There is also a kids marathon. Each runner has an opportunity to raise proceeds to help the hospital’s mission: that families never receive a bill for treatment, travel, housing or food while their children diagnosed with cancer are being given medical attention at the facility.

To date, funds raised for the St. Jude event have now surpassed $5.8 million.

Peppenhorst said she knew she wanted to do more for the cause. In 2017, she put together her first team to participate in the 5K.

“I call them my squad,” she said of her supporters. “There were seven to eight people on the team, and so many were able to contribute.”

This year, Peppenhorst wanted to do more to help St. Jude. so she organized a fundraiser at The Blue Room.

“I was thinking $1,500 because that is the limit for the level I wanted to achieve,” she said.

But to her surprise, the benefit this past September not only reached the benchmark — it doubled it.

“We raised $3,000,” Peppenhorst said. “It was unbelievable. We had so many come out to support that day.”

Peppenhorst said the money she has raised so far has been able to cover one day of treatment plus activities, such as the St. Jude’s formal. She said she is overwhelmed by the love and support she has received from friends, family and members of the community.

Those interested in participating have until the end of January to donate. Peppenhorst said her “squad” has now raised close to $4,000.

“With this money, I know exactly where it is going,” she said. “Families at St. Jude never have to pay any of their expenses.You see them out there supporting you while you run and it makes you want to do more. [I think] what more can I possibly do to help them.”

For the upcoming event on December 7, Peppenhorst will be participating in her first 10K. She said she is excited not only because she is training for a different distance, but she is also looking forward to being around her fellow runners.

“It was just so neat to be around runners,” she said. “We are able to bond together and really be a part of something.”

If you are interested in contributing to Peppenhorst’s team for St. Jude’s Children’s Hospital, log on to http://heroes.stjude.org/reenapepp. 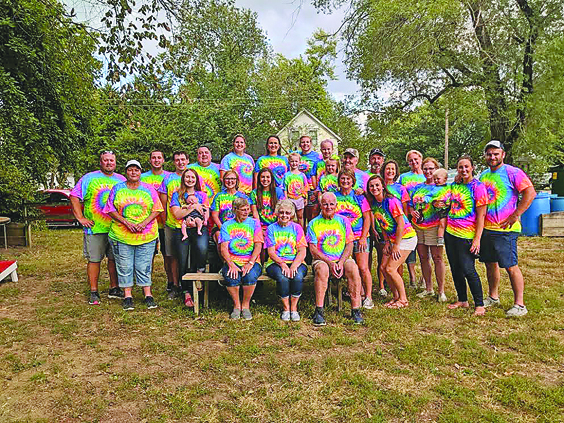 Supporters of Reena Peppenhorst pose together after a recent benefit held at The Blue Room in New Minden. The fundraiser garnered $3,000 for St. Jude’s Children’s Hospital. Peppenhorst refers to her team as her “squad.” 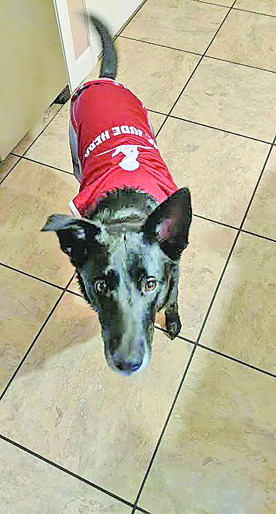