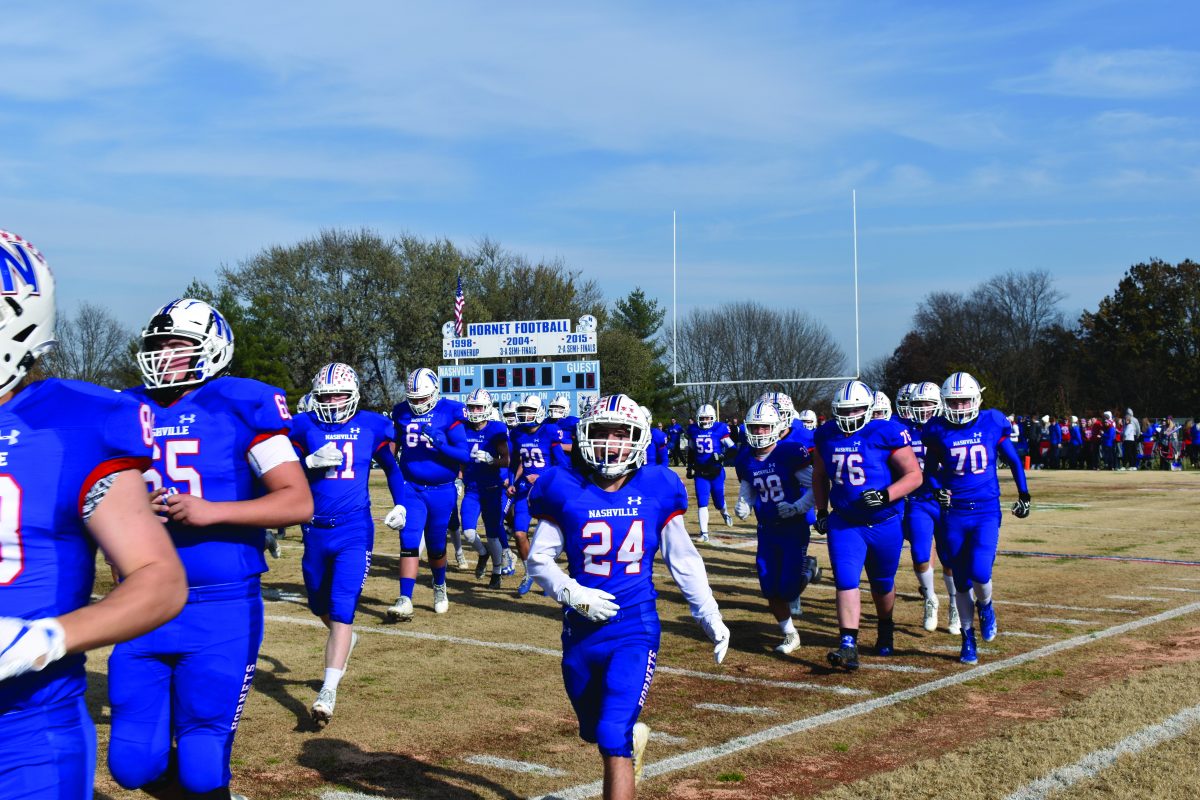 After taking care of business last week at Bismarck-Henning, the Hornets (11-1), found themselves back at home Saturday as they played host to the Panthers of Pana. Pana (10-2), came into the contest as the highest ranked seed in the 2A bracket. Nashville’s defense would be tested early. On the first drive of the game the Panther’s found themselves with a first and goal at the Nashville two-yard line. With their backs against the wall, the story of the postseason remained the same for the Hornet defense; make a big play when we need it the most. After the defense stuffed the Pana rushing attack on the first three attempts, Nick Miller laid out and denied the Panther receiver the ball forcing a turnover on downs. A few plays later, Nashville fumbled the ball, giving the Panthers a short field. Lane Perry would later finish the drive off with a 6-yard touchdown run which gave Pana an early 7-0 lead. The Hornets responded well on their next drive and answered with a touchdown of their own, knotting things up at seven. The score came courtesy of a 5-yard run by Julian Metcalf. Forty-one seconds later, the Panthers retook the lead after Jonah Lauff connected with Jacob Klein for a 42-yard touchdown. After the point after try was no good, the lead was 13-6 with 2:26 left in the first quarter. With seconds remaining in the first quarter, Nick Miller found himself in the spotlight yet again. Miller made a highlight reel interception off Pana’s Lauff to give Nashville’s offense the ball at the Panther 49-yard line. Shortly into the second frame, Julian

Metcalf bulldozed his way in for a one-yard touchdown. Thanks to Pana’s mixed extra point earlier in the game, Nashville was able to claim a 14-13 lead. About midway through the quarter, Isaac Turner came away with Nashville’s second interception of the day. Nashville’s offense took advantage of the turnover when Jaxon Goforth caught a pass from Cole Malawy, made a couple Panther defenders miss, and muscled his way in for a 28-yard touchdown. The Hornet lead had grown to 21-13, and that is the score the two teams took into the halftime break. The Hornets would receive the ball to begin the second half. After a quick Nashville opening drive, Lauff found Bryce Edmiston for a 75-yard catch and run score. After a failed two-point conversion, Nashville’s lead was at 21-19 early in the second half. The third quarter would end in crazy fashion as both teams turned it over multiple times within the last two minutes of the quarter. Isaac Turner found himself in the middle of the action on both sides. Turner would once again provide an interception, and on the first play of the drive he hauled in a beautiful catch on a perfectly placed ball from Malawy. Turner hauled in six catches for 111 yards. Unfortunately for the Hornets they fumbled it on the very next play. Neither team’s offenses were able to capitalize on the turnovers, and the Hornets held a 21-19 advantage going into the deciding quarter. Nearly four minutes into the fourth, Metcalf completed the hat trick with a 3-yard run, padding the Hornet lead to 28-19. On Pana’s next drive, Nashville was inches away from having a defensive touchdown. The Hornets sacked the quarterback and forced a fumble, but the referee ruled the quarterback was down before the ball came loose. On the very next play, the Hornets would replicate the previous play, although this time it ended in the end zone after Gavin Baldwin picked up the fumble and rumbled his way for a 6-yard touchdown. The Hornets would hold a commanding 35-19 lead after the scoop and score. With 3:13 left in the contest, Metcalf would find the end zone once more, this time from one yard out. After missing last week’s game at

Bismarck-Henning, Metcalf came into Saturday’s game with vengeance. The senior running back finished the game with four touchdowns to go along with 149 yards. After a mixed extra point, Nashville’s lead was now at 41-19, and that is how it ended. Nashville’s defense suffocated the Panther offense, especially in the second half.

“The defense was so good,” said Coach Kozuzsek after his team’s third round playoff win.

Coach credits his team for getting stronger as the game went along.

“They were struggling to get lined up, and their pass protection was really wearing down, we were getting to the quarterback and putting some shots on him,” Kozuzsek said.

The Hornet defense held Lauff to a modest 9-24 for 174 yards. They gave up the two touchdowns, but Miller, Turner, and Justin Aulds were all able to tally interceptions. Nashville’s Malawy finished 20-24 for 223 yards and added a touchdown. The Hornets will look to advance to the state championship next weekend when they take on Decatur St. Teresas (11-1). The Bulldogs collected their quarterfinal victory Saturday over Auburn (8-4) by a score of 34-6. 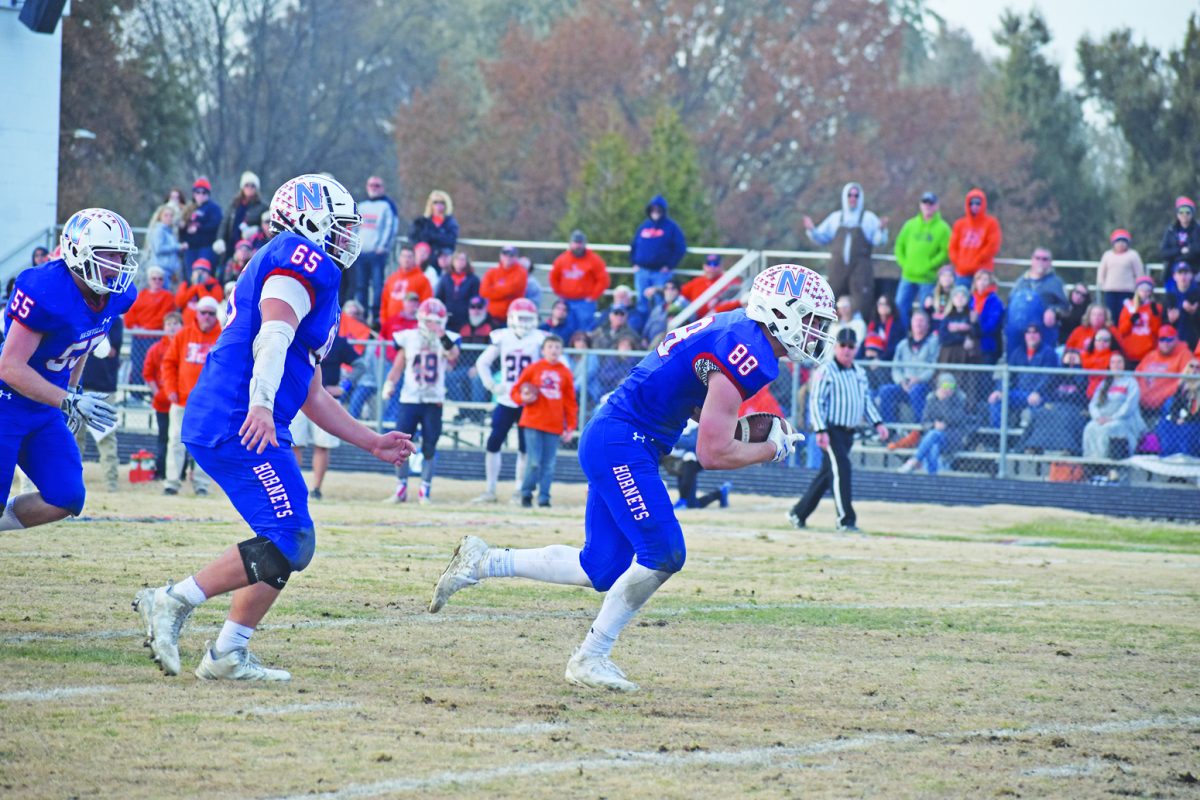 Gavin Baldwin (88) scoops up a fumble and scores for the Hornets.