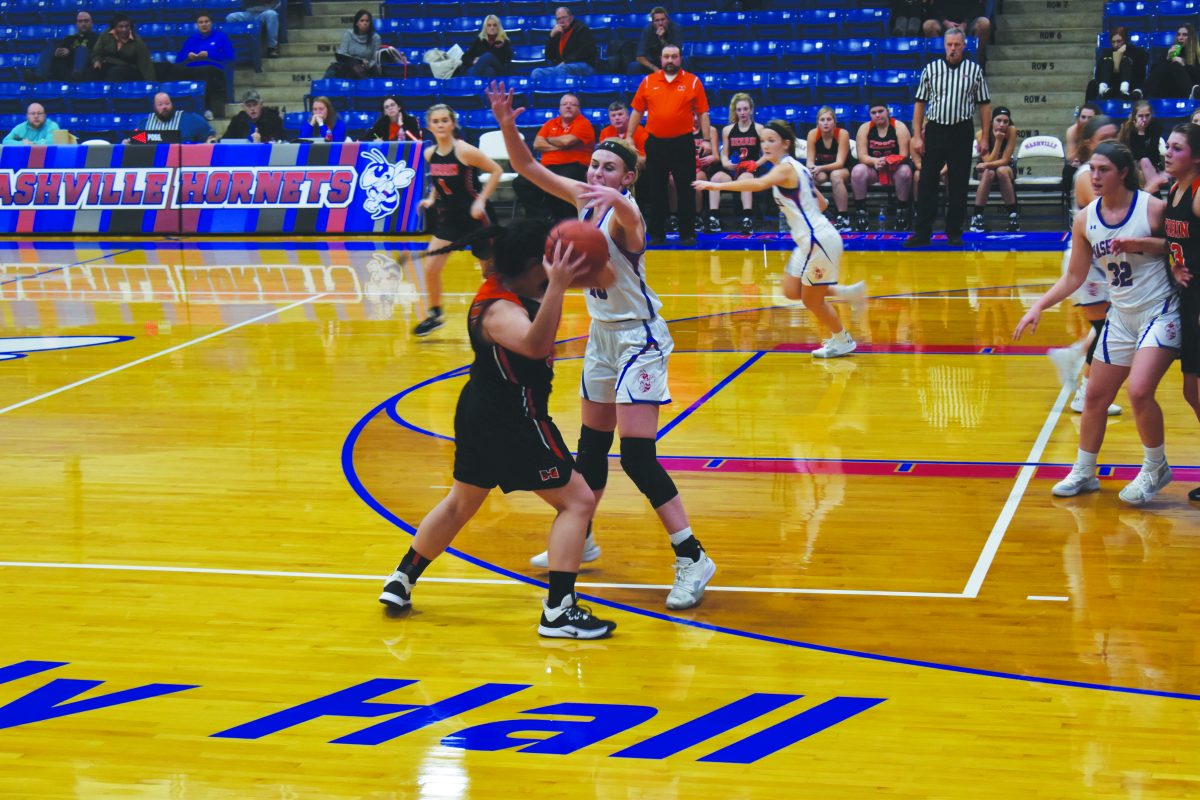 Rylee Luechtefeld (25) guards a Herrin player during their game Thursday.

The Hornettes continued their campaign last week in another set of home games. They were riding a three game win streak and were looking to continue their winning ways against Sparta, Herrin, and cross-county rival Okawville.

“It’d be nice to get three wins this week; it’d be a nice feather in our cap,” Head Coach Doug Althoff explained.

“The second half was very good. We got comfortable a little bit and were starting to hit the passes where we needed to throw the ball, in and out stuff and getting it in the middle. We started making some shots, and when you’re making shots it just makes everything go so much nicer,” Coach Althoff said.

The Hornettes had three players that were able to jump into double figures. Luechtefeld finished the game with 16 points, nine of those coming in the third quarter. Sabrina Kollbaum finished with 14 points, and Cole finished with ten points. Emily Schnitker added nine, Daphne Kollbaum threw in six, Jordan Donato had five, Halle Reuter had two, and Talanie Kozuszek ended up with one. It was a quick turnaround for the Hornettes, as they were back at Assembly Hall Thursday to take on the Herrin Lady Tigers. Much like the Sparta game, the Hornettes were able to get off to a big lead early. After the first, Nashville held a 22-6 advantage. At the half, the lead had grown to 18 as the Hornettes held a 32-14 edge. In the third quarter, both teams scored eight points, and Nashville was able to keep their 18 point lead. The Hornettes held on for a 50-30 victory, securing their second win in three days. For the second consecutive game the team had two scorers reach double figures. Cole had another big night, finishing with a game high 20 points. Sabrina Kollbaum hit three triples in route to her 15 point night. Schnitker hit two threes, giving her six points on the night, Donato added five more, and Leuchtefeld rounded out the scoring with four. The JV sqaud also collected a victory. They won their game 41-24. Daci Finke and Daphne Kollbaum both finished with seven. Colleen Jahnke and Cheyenne Boester threw in six. Halle Rueter, Talanie Kozuszek, and Bailey Newman all had three, and Hope Liszweski, Korbi Rhine, and Emma Van Hise finished with two. The Hornettes would look to extend their winning streak to six on a Saturday afternoon contest against Okawville. The trend continued into Saturday as the Hornettes were able to jump out to a 13-5 lead after the opening quarter. Hornettes continued to make life difficult for the Lady Rockets in the second, and the team took a 19-8 lead into the intermission. By the end of the third the lead had grown to 22, as they were able to hold Okawville to just 10 points through 24 minutes. The undefeated week would be capped off with a 39-14 victory. Nashville only allowed four Okawville field goals and held them to 16 percent shooting. Cole led the team in scoring with 19 points. Sabrina Kollbaum and Luechtefeld and both added five, Donato and Schnitker both hit one triple apiece and finished with three, and Ashlyn Frazier as well as Daphne Kollbaum threw in two.

“We just tried to put a lot of pressure on the ball. I think we accomplished that, and that made it hard for them to enter the passes. If you have someone up in your grill all the time it makes it difficult, and I think we kind of wore them down in the second half,” Athoff said in regards to his team’s impressive defensive effort. The JV won their game, 29-20. Rueter led the way with fourteen. Newman added five, Kozuszek and Frazier finished with three, and  Kollbaum and Boester had two.

The three wins on the week put the Hornettes at 9-1 on the season, and the team is currently riding a six game win streak. During the week of action, the Hornettes were able to outscore their opponents 152-68. Coach Althoff had high praise for his team’s mentality going into last week, and they were “always ready to go.” They will continue their season this week with a pair of games. They will play Tuesday at Carterville before coming back home for a Saturday showdown with Benton.

Above: Nashville and Okawville players and coaches pose for a picture before their annual Washington County Relay For Life Game.