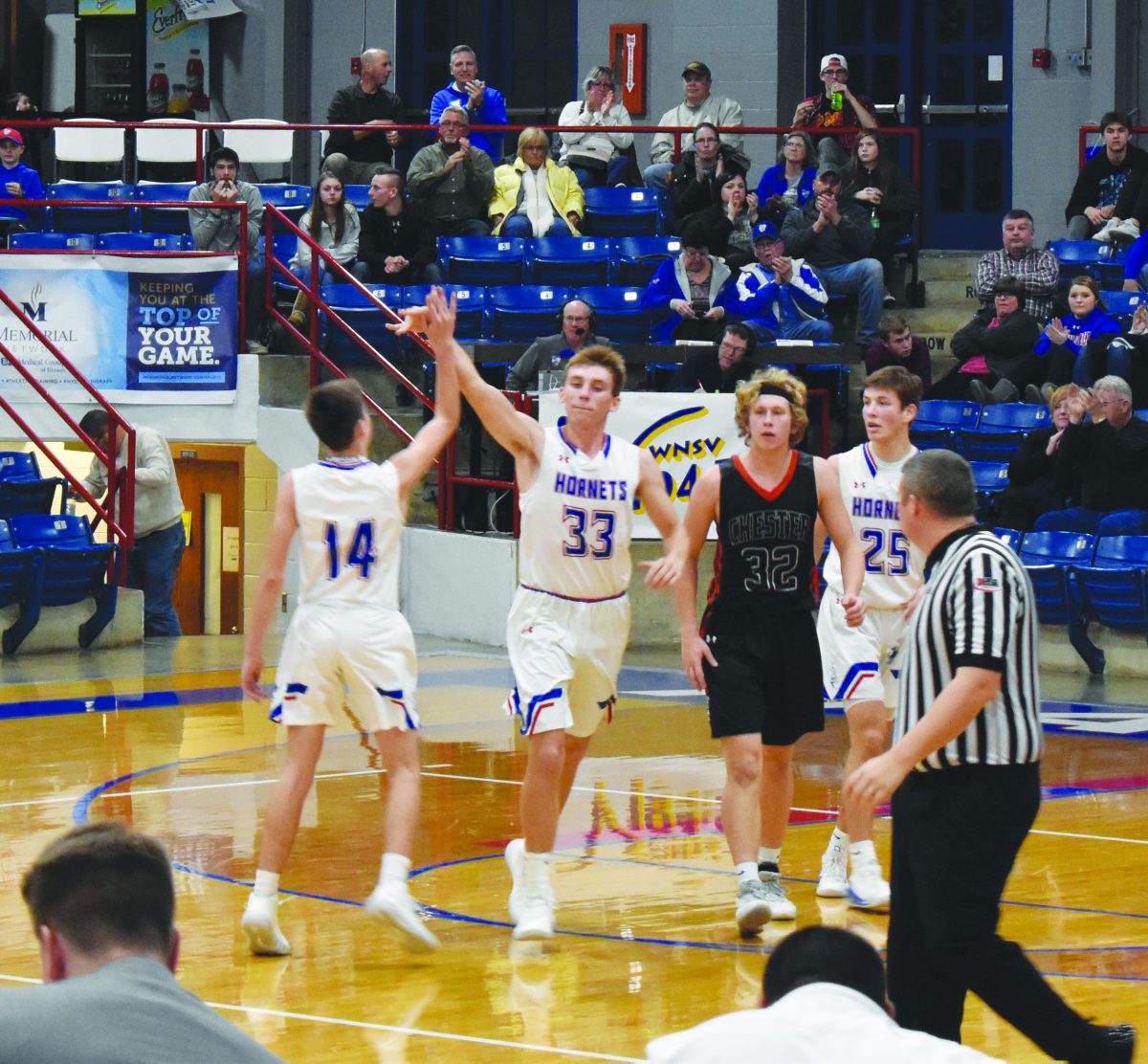 Above: Terry Pelczynski (33) celebrates with Buzz Ritzel (14) after burying a three pointer at the buzzer at the end of the third quarter in Tuesday night’s victory.

After two wins last week, the Hornets welcomed the Chester Yellow Jackets to Assembly Hall Tuesday night. Nashville saw the away team cease momentum to begin the game. Chester was able to get out to an 8-3 lead midway through the first period. On one of the last Hornet possessions of the first quarter, Carson Parker drove the lane and missed a contested layup.

The Hornets were able to fight to keep the possession alive, and the ball eventually found Terry Pelczynski. Pelczynski was able to fight off the Yellow Jacket defender and found himself at the line with a chance for a three point play. The defense stiffened up, Parker hit two late free throws, and the Hornets went into the second with an 11-10 lead. The Hornet defense only allowed five Yellow Jacket points in the second period, and after another back and forth quarter, Nashville led 19-15 at the half. The Hornets were able to hold Chester to a meer two points throughout the entirety of the third frame. Nashville’s offense was able to muster together nine points of their own, none bigger than a Pelczynski three pointer at the buzzer.

As the senior fist pumped and high fived his teammates walking off the floor, he Chester glaring at a 28-17 deficit heading into the final frame. The two teams hung matching ten spots in the fourth quarter, and the Hornets were able to hang on for a 38-27 victory. Parker led the Hornets in scoring with 13 while also adding six offensive rebounds, finishing with eight overall. Tristen Hercules also finished in double figures with ten. Pelczynski threw in nine more, Jaxon Goforth had four, and Nolan Heggemeier added two. The win brings the Hornets to 7-1 on the season. The Hornet junior varsity team also played host to Chester. The Hornets were able to jump out to an early 13-5 lead before extending their lead to nineteen midway through the game. The boys were able to keep momentum on their side in the second half, and they never allowed Chester an opportunity to get back into the game.

After the third quarter, the Hornets were able to build their lead to 46-19 as they cruised to a 54-21 win. Saxton Hoepker was the high point man for Nashville, finishing the contest with 16 points. Buzz Ritzel also found himself in double figures with 11.

Nine out of his eleven points came from beyond the three point line. Kolten Gajewski finished with ine, Will Barczweski and Lucas Knepp both had five, Radyn Schwartzkopf had four while Isaac Turner and Carter Schoenherr each finished with two.