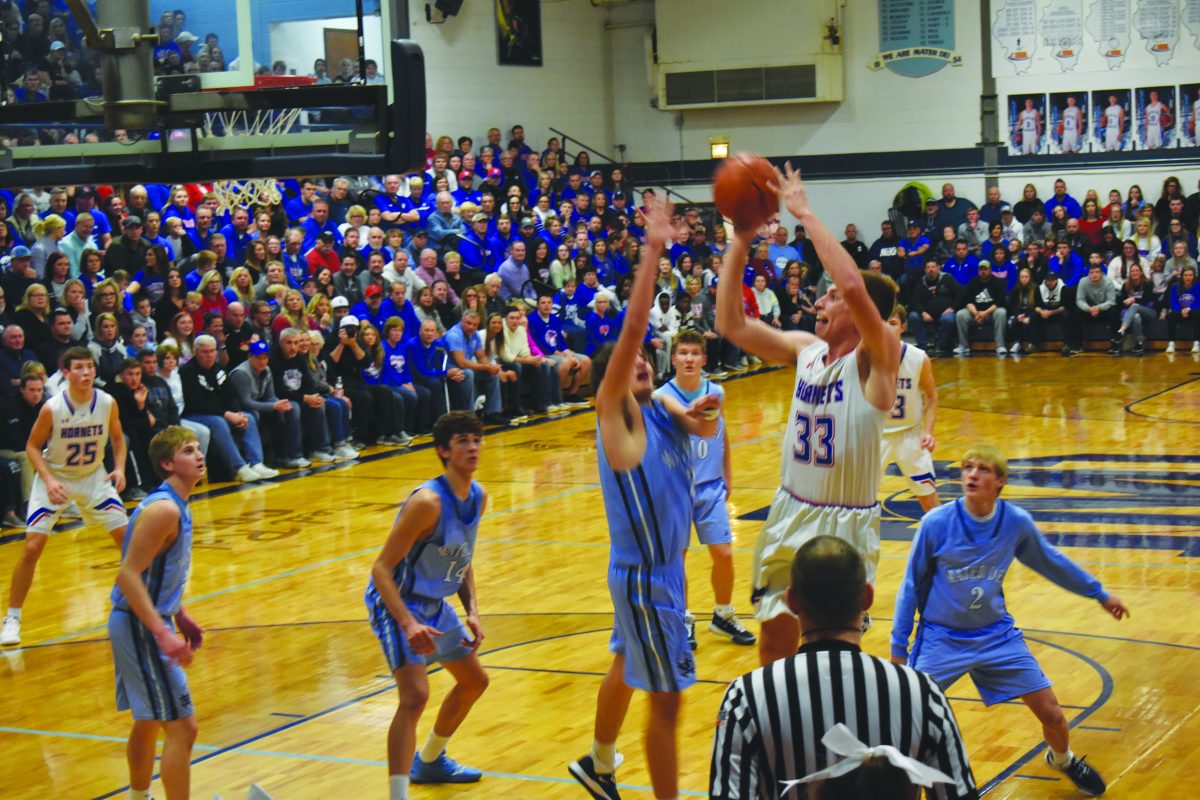 Terry Pelcyznski grabs a rebound during the Mater Dei Tournament.

The Hornets continued play in the Mater Dei Tournament Friday, Dec. 27th against the newly added Wesclin Warriors. The top seeded Hornets were able to assert their dominance from the tip-off. The only point the Hornets allowed in the first quarter came on a free-throw. Their strong effort on the defensive end continued in the second quarter.

The only Wesclin field goal of the first half came courtesy of a three-pointer, putting the score at 13-4. The boys in blue and white were able to close the half on a 9-0 run to take a commanding 22-4 lead into the halftime break. The Hornet lead grew to as many as 23 after Terry Pelczynski scored the first five points of the third frame.

After three, the Hornets led the Warriors 33-9. Wesclin was able to outscore the Hornets 13-6 in the final quarter, but the contest was all but out of reach. In what may have been their most complete of three tournament games, the Hornets cruised to a 39-22 victory. Pelczynski led the team in scoring with 13. Carson Parker was also able to sneak into double figures, finishing with 10. Jaxon Goforth threw in eight, Isaac Turner finished with five, and Tristen Hercules rounded out the scoring with three.

The scoring outburst enabled Nashville to take a 36-19 lead into the final frame. It was a tightly contested fourth quarter, but the third quarter scoring put the Cougars on a slippery slope. The Hornets would move to 4-0 after a 48-30 victory. It was Pelczynski who once again led the team in scoring, this time finishing with 15. Hercules jumped into double figures for the first time in the tournament after finishing with 12. Parker finished with seven, Buzz Ritzel threw in a pair of triples to finish with six, Goforth had five, and Turner had three.

After turning in four wins in a span of three days, the table was set for a Monday night showdown with the host, Mater Dei Knights, for the tournament crown. The standing room only crowd were witnesses to a defensive battle in the first quarter. It would be the Hornet fans that would be happy with the score after one, as Nashville led 8-4 after the opening eight. After the first quarter, both teams put their offensive struggles behind them. Late in the first half, the Knights appeared to be on their way to a 21-19 lead at the intermission. Pelczysnki had other plans.

With time expiring, the Nashville senior buried a three pointer to put the Hornets up 22-21 going into the second half. The late triple put the lid on an 11-point first half effort for Pelczynski. The halftime lead evaporated quickly in the third. After a put back dunk and a three pointer, the 7-1 Knight run prompted a Hornet timeout.  The Hornets were able to retake the lead before the final frame as they led 29-28. The Hornets were outscored 19-15 in the final eight minutes and fell short 47-44. Pelczynski kept his strong week going, as he hit four three pointers in route to his team his 22 points. Parker finished with a double-double after notching 13 points and 11 rebounds. Hercules tallied six, Ritzel had two, and Goforth rounded out the scoring with one.

With just over two minutes remaining in the game, the Hornets suffered a big blow in the form of Parker falling victim to his sixth foul. After losing their leading scorer, Coach Harre liked his team’s response.

“I will say this; I thought we played pretty well without Carson. Maybe that helps us down the road in case he gets in foul trouble,” Harre said.

The standing room only crowd to go along with a closely played game presented the feel of postseason basketball.

“That’s a postseason basketball game right there, that’s what I told them after the game. That’s the way it is. Those little small things you do, might get you beat. It happens, we all make mistakes when we play basketball, but down the road hopefully that won’t happen,” Harre explained. 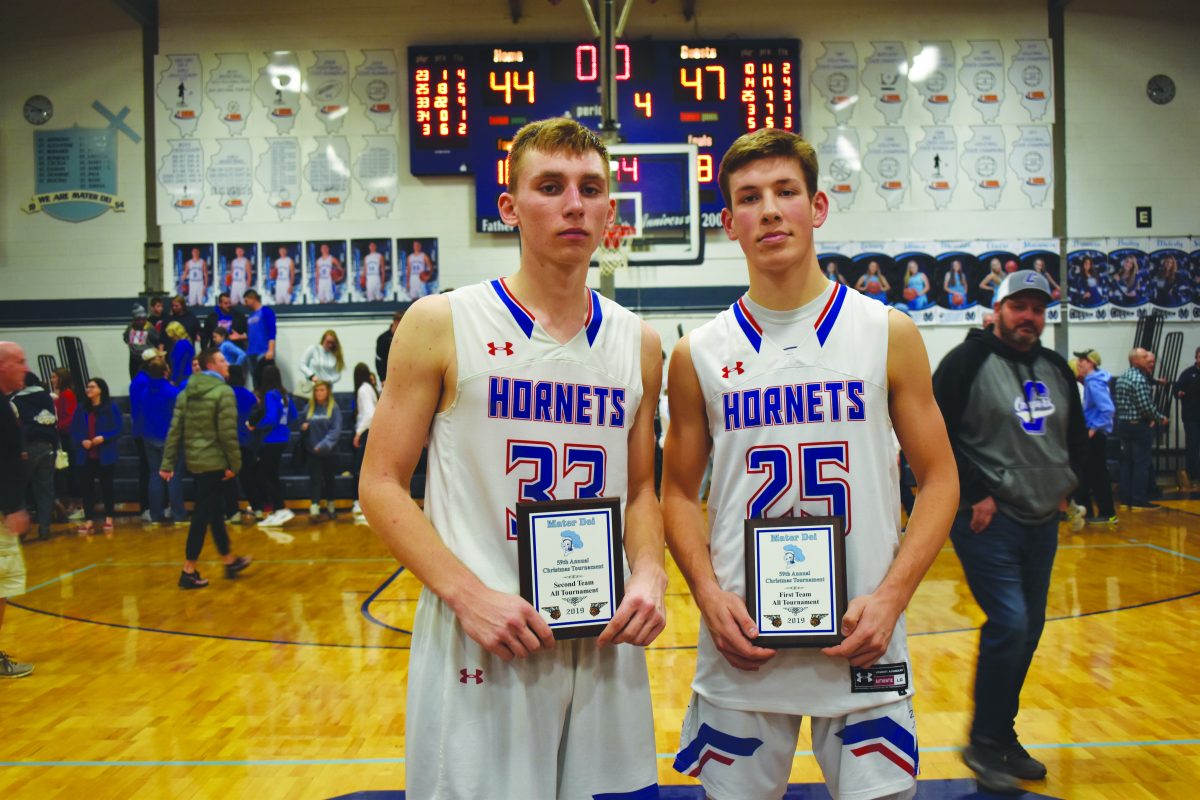 Terry Pelczynski and Carson Parker were both named to the Mater Dei All-Tournament Team.