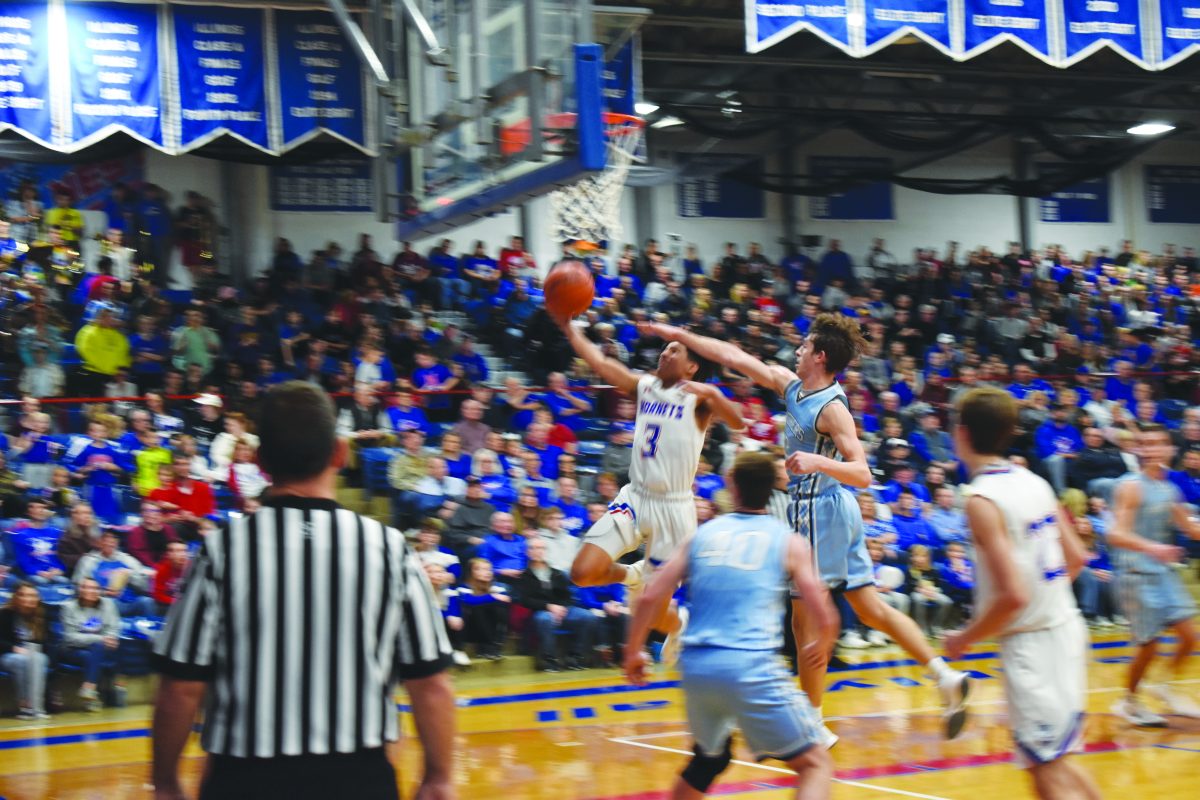 Above: Tristen Hercules beats the clock in Friday’s game against the Panthers. Hercules finished with 16.

The Hornets started their season back up Saturday, Jan. 4th at Carterville. The Hornets came away victorious on the road against their conference rival, 45-34. Nashville had three Hornets end up in double figures. Carson Parker finished with 14, Pelczynski had 11, and Buzz Ritzel had ten. Tristen Hercules finished with eight, and Neil Kabat got on the board with two.

On Friday, the Hornets welcomed rival, and newly one-seeded Pinckneyville, to Assembly Hall. In what one fan called “the fullest he’s ever seen the parking lot,” the atmosphere did not disappoint. Late in the first quarter, a Jaxon Goforth bucket forced Pinckneyville to call a timeout trailing by six. They were able to hit a late three pointer to get it within three, and as most people expected, this had all the makings of a game that would come down to the last possession. Needless to say, the first quarter was not an accurate indication of how the rest of the game would transpire. The Hornets erupted for thirteen straight points, overwhelming the Panthers. The Hornet defense was also clicking, and only allowed three Pinckneyville points the entirety of the second quarter. The Hornets cruised into halftime up 25-10 on the top ranked Panthers. During the scoring outburst, the Hornets were distributing the wealth, as they had four different players score points.

“I thought we shot it pretty well. We spread it out so that helped. I thought we kept our composure and got some good looks,” Coach Harre said in light of his team’s second quarter scoring run.

The Hornets saw their lead grow to as many as 17 throughout the third quarter, but the Panthers did not go quietly. They scored ten out of the last thirteen points and were able to get the margin back to ten going into the final frame.

“We told them at halftime they were going to make a run,” Harre said on Pinckneyville’s late surge in the third quarter.

After the Hornets saw their once 17 point lead dwindled to ten, they responded accordingly. They scored the first six points of the fourth quarter to put the lead back to 16.

“It can turn in a hurry. We got an inbounds and scored a bucket, then we scored another bucket. It’s just a good team effort. We’re not comfortable up fifteen against a team like that. We have to play every possession,” Harre explained.

A year removed from being the number one seed and losing at Pinckneyville, the Hornets were able to return the favor with a 57-38 victory. Tristen Hercules and Carson Parker both finished with 16. Camden Ritzel threw in eight, Terry Pelczynski had seven, Goforth had six, and Isaac Turner added two.

The Hornets had nearly 20 hours to bask in the glory of beating the top ranked Panthers before they welcomed another familiar foe to town, the Okawville Rockets. The Hornets looked to be in control early in this game after two consecutive Pelczynski threes forced Okawville’s Jon Kraus to call a timeout early in the game. A Parker layup put the Hornets up six, but the Rockets did not go quietly. Okawville closed the quarter on a 13-4 run to put themselves ahead by three going into the second set of eight. After Okawville controlled most of the second quarter, Parker was able to get free to the corner and drill a buzzer beating three pointer to give the Hornets the slimmest of leads at the intermission. After a back and forth first half, the second half was no slouch. The third quarter featured seven lead changes where neither team could build anything more than a two point lead. The Rockets came out in the fourth quarter and scored nine of the first thirteen points, catapulting them to a three point lead. Okawville carried their three point lead down to the last 11 seconds. A Pelczynski shot from behind the arc tied the game up at 38 and forced overtime.

“I don’t know if we quite ran it right, but we got it where we needed to get it, and he shot it,” Harre said in regards to the play ran to set up the game tying shot.

The tie was broken courtesy of a triple coming at the hands of Goforth, and the Hornets never looked back. The late heroics earned the Hornets a 47-43 victory over the Rockets.

“It’s a victory that everybody is part of. The players gutted it out,” Harre said.

Pelczynski led the Hornets with 16 points. Parker added 13 while Ritzel and Goforth contributed seven. In his first action of the season, Matt Anderson tallied two, as did Hercules. The three wins put the Hornets at 15-3 on the season. 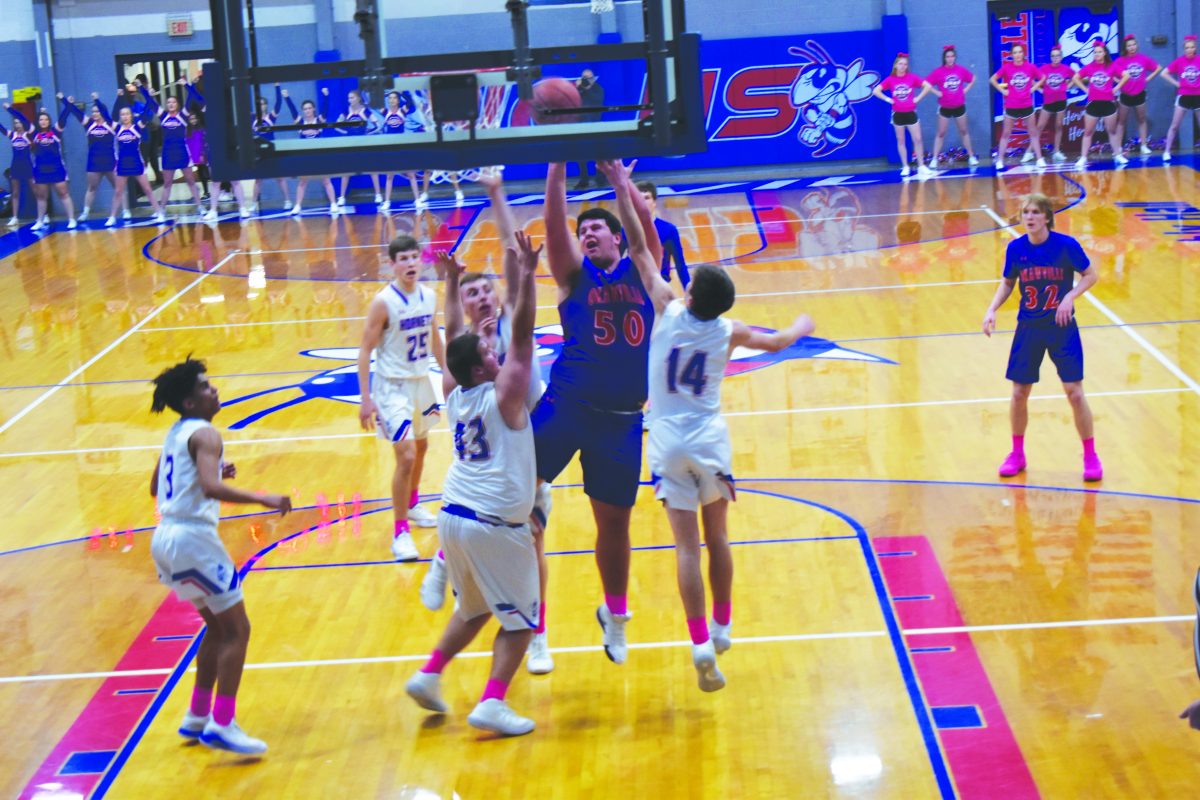 Above: The Hornet defenders try to stop Okawville’s Jackson Heckert.