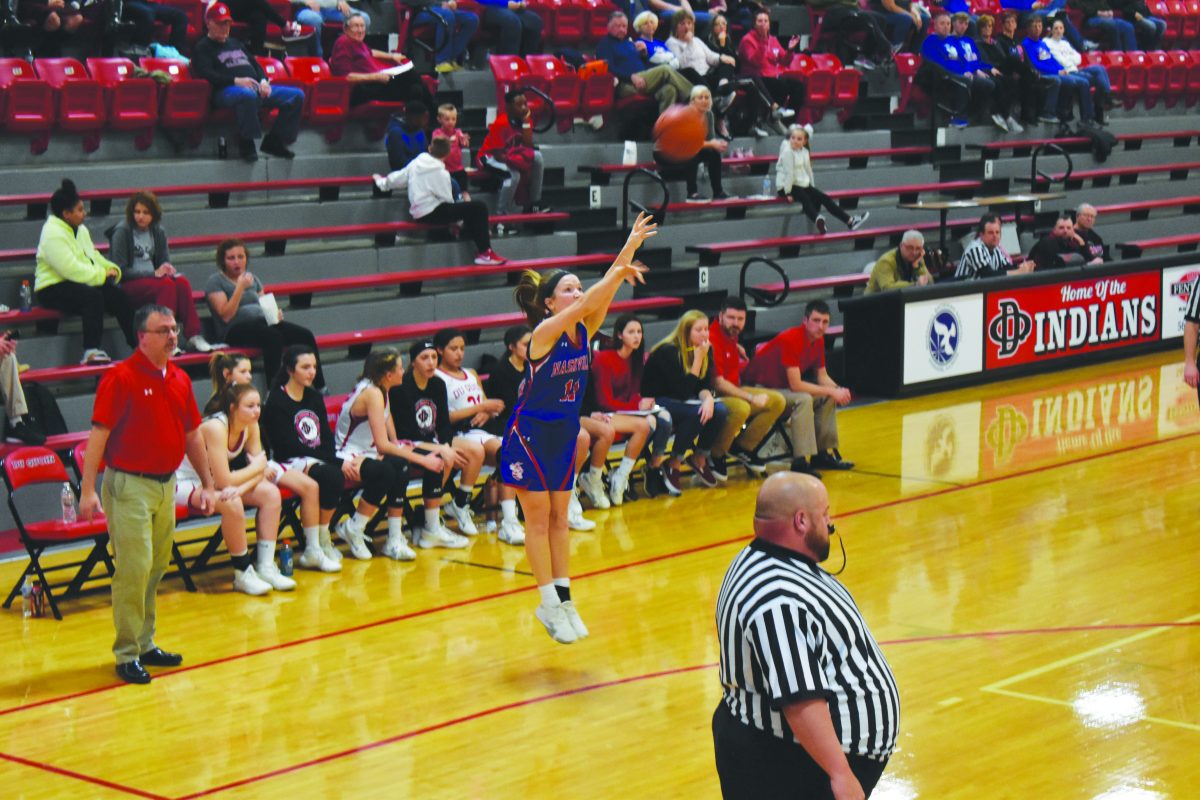 After a six day layoff, the Hornettes were back on the hardwood, Friday, Jan. 3rd in a home game against rival Pinckneyville. It was a slow start for both offenses, as Nashville’s only field came on a two-pointer from Alyssa Cole. After being down three going into the second quarter, the Hornettes were able to pick it up offensively and were able to grab a 14-10 lead at the half. After a tightly played first half, the Hornettes were able to extend their lead in the second half. A 12-2 scoring run in the third quarter enabled Nashville to take a comfortable lead into the final frame. It was another low scoring quarter, but the production in the second and third quarter were all the Hornettes would need to seize the victory. Nashville would go on to take the Highway 127 battle 30-17. Sabrina Kollbaum and Cole finished with eight Emily Schnitker threw in seven, Rylee Luechtefeld tallied four, and Halle Rueter added two more. The team would look to continue their winning ways Saturday, Jan. 4th at the Breese-Central Shootout against Piasa. The Hornettes had their backs against the wall early, as they were not able to muster together any points and saw themselves down 13-0 after one. Nashville woke up in the second quarter, and an 11-5 run put them back within striking distance before the half. By the end of the third, the Hornettes were able to take a once double digit deficit and dwindle it down to five. The rally would not be cut short in the final frame. The Hornettes battled back, and the two teams headed to overtime knotted at 27 apiece. The Hornettes did not have a field goal in overtime, but three free throws coming from Kollbaum and Luechtefeld were the only offense Nashville would need, and they held on to win 30-29. Schnitker was the only Hornette to finish in double figures, doing so with 12 points, all coming courtesy of the triple. Cole, Luechtefeld, and Kollbaum all finished with six points. The team continued play Tuesday night in a road test against the Lady Terriers of Carbondale. The Hornettes made their presence felt early as they took a 17-6 lead into the second quarter. Nashville was able to continue their hot start, and at halftime the lead had grown to 20. The second half was much of the same, and by the end of the third, the Hornettes saw themselves up by 31. They would eventually cruise to a 53-26 victory. The Hornettes had two scorers finish in double figures. Cole led the way with 21 points, and Kollbaum had 15. Luechtefeld finished with six, Donato threw in four, Schnitker finished with three, and Rueter, as well as Daphne Kollbaum, finished with two. The busy schedule continued Thursday night in DuQuoin. It was 8-7 in favor of the Lady Indians after the first quarter, then the Hornettes were able to take control of the game from then on. During the second, DuQuoin led 10-9, and that was the last time the Hornettes would find themselves behind in the scorebook. The Hornettes were able to outscore DuQuoin 10-4 in the second quarter to take a six point lead at the half.

“We were struggling to get a bucket. Even at halftime, I just try to keep them calm and make sure we play defense, because defense will keep you in games like that. When you can’t make one, you can always play defense, and rebound,” Althoff said in regards to his team’s late surge in the second quarter.

During the third quarter, a Luechtefeld three pointer put the Hornettes up eleven, which in turn prompted a DuQuoin timeout. They were able to take that 11 point margin into the final frame with them. Nashville was able to extend their lead to thirteen at two points during the fourth quarter, and they would eventually hold on for a 44-31 win.

Cole and Kollbaum found themselves in double figures yet again, Cole with 13 and Kollbaum with 10. Schnitker and Luechtefeld both threw in nine while Olivia Cook finished with three.

“It was a tough game. They always give us everything we need, I know that,” Coach Althoff said.

The win puts Nashville at 16-4 on the season, and the Hornettes are currently riding a four-game winning streak.

“It’s been pretty good. You just have to keep trying to keep the win train going, and it’s always much more fun to win. I always say it doesn’t matter so much what happens in games, as long at the end of the game you have more points than they do,” Althoff said.

The Hornettes (16-4), will be back in action Monday night against another conference foe, the Anna-Jonesboro Lady Wildcats.