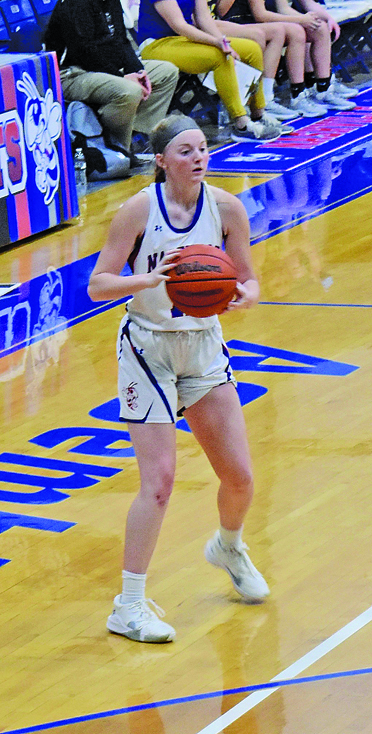 Jordan Donato looks if there is a passing lane to throw it inside during Thursday’s win against Carlyle.

Following a week where they collected a pair of wins, the Hornettes looked to extend their winning streak to five games on Monday against fellow SIRR Conference member, the Anna-Jonesboro  Lady Wildcats. Nashville took the first contest this season at Assembly Hall, 50-37. The Lady Wildcats came out firing, hitting three triples in the first quarter which guided them to a two point lead heading into the second frame. After allowing an uncharacteristic amount of points in the first quarter, the Hornette defense came out in the second with vengeance. Nashville only allowed Anna-Jonesboro two points in the second period, and were able to score nine of their own. Flipping the script in the second quarter allowed the Hornettes to take a five point, 20-15, lead at halftime. Nashville was able to keep the pendulum swinging in their favor in the second half. After a slow start to the game for the offense, the Hornettes erupted for 16 third quarter points, and what was once a deficit turned into a twelve point lead for the Hornettes heading into the final minutes. The Lady Wildcats hung around, but they were never able to cut into Nashville’s lead. The Hornettes were able to secure their seventeenth win of the season by a score of 43-30. Alyssa Cole finished with 14, and Rylee Luechtefeld had 12. Emily Schnitker and Sabrina Kollbaum both threw in six, Jordan Donato finished with three, and Halle Rueter had two. After another road conference win, the Hornettes,(17-4), welcomed the Lady Indians of Carlyle to their floor on Thursday. Nashville made the welcomed feel unwelcomed very quickly. Five straight points by Schnitker were followed by four straight points by Luechtefeld, and the Hornettes, up 9-0 at the time, forced Carlyle to use a timeout only two and a half minutes into the game. The early run enabled the Hornettes to take a ten point lead into the second quarter. Just as the Lady Indians broke double figures, the Hornettes closed the half by scoring ten straight points to take a commanding, 32-10 lead into the locker room. The Hornettes did not allow Carlyle to ever gain any traction in the second half, and when it was time to enter the fourth quarter, the Hornettes had scored 26 straight points. Nashville sent Carlyle home with a 55-13 loss. Luechtefeld led the Hornettes with 15 points, 12 of those coming in the first half. Schnitker also reached double figures with 11. Cole finished with nine, Kollbaum had seven, Olivia Cook had five, Rueter and Talanie Kozuszek each chipped in three, and Donato had two. The win puts the Hornette streak at six, but with the postseason lurking, Nashville Head Coach Doug Althoff is always looking for ways to improve.

“I hope we’re not peaking yet, but we are playing really well. There’s always room for improvement, but all in all I think we’re playing pretty good right now. I don’t have many complaints at all, hopefully we keep it rolling like it is now,” Althoff said.

The Hornettes were looking to keep up their winning ways Saturday against Belleville East in their first game of Highland Tournament action.

“It’s going to be a tough game for us, I think we can compete with them,” Althoff said.