The Hornettes were able to grab an early 4-2 lead, but the advantage evaporated quicker than it appeared. Following four straight points from the Hornettes, the Lady Panthers rattled off seven straight points, and Head Coach Doug Althoff was forced to burn a timeout with just over three minutes remaining in the first quarter.

Out of the timeout, a combination of miscues on offense and the inability to contain the O’Fallon scoring attack put the Hornettes in a 19-8 hole going into the second quarter. In the second quarter, Hornette fans saw the team they have been accustomed to seeing for most of this season.

The Hornettes were able to score seven out of the first nine points in the quarter, which catapulted them back to within six. The Lady Panthers were able to extend their lead back to nine just before halftime, but a 20 percent shooting mark allowed the Hornettes to stay within striking distance.

The third quarter saw its fair share of ups and downs. Nashville was able to score the first seven points in the quarter to cut the deficit to three, but as it was in the first quarter, the Nashville momentum was halted by the Lady Panthers. The score was 26-23 before O’Fallon was able to close the quarter on a 15-5 scoring run which was capped off by a near halfcourt buzzer beater.

The loss to O’Fallon meant the best case scenario for the Hornettes would be to play in the fifth place game on Saturday. In order to reach Saturday, they were going to have to get through Mater Dei. The Hornettes struggled to find themselves early in this game, and after scoring only four points in the first quarter, the Hornettes were trailing by six going into the second quarter.

Nashville responded in the second quarter and outscored the Lady Knights by eight. The surge allowed the Hornettes to take a 17-15 lead midway through the game. The third quarter saw the struggling Hornette offense return. Nashville was outscored by five in the third quarter, and Mater Dei was able to regain the advantage heading into the final eight minutes. The Hornettes were able to hang around in the fourth, but only three second half field goals doomed the Hornettes as they fell short 37-30. The loss eliminated the Hornettes (19-6) from tournament play.

Alyssa Cole led all Hornettes in scoring with 16. Sabrina Kollbaum finished with nine, Rylee Luechtefeld threw in three, and Emily Schnitker finished with two. The team will venture to Sparta on Tuesday before returning home to face Carterville on Thursday. On Saturday, they will have another crack at the Lady Knights as they hit the road Saturday for a 2:30 game. 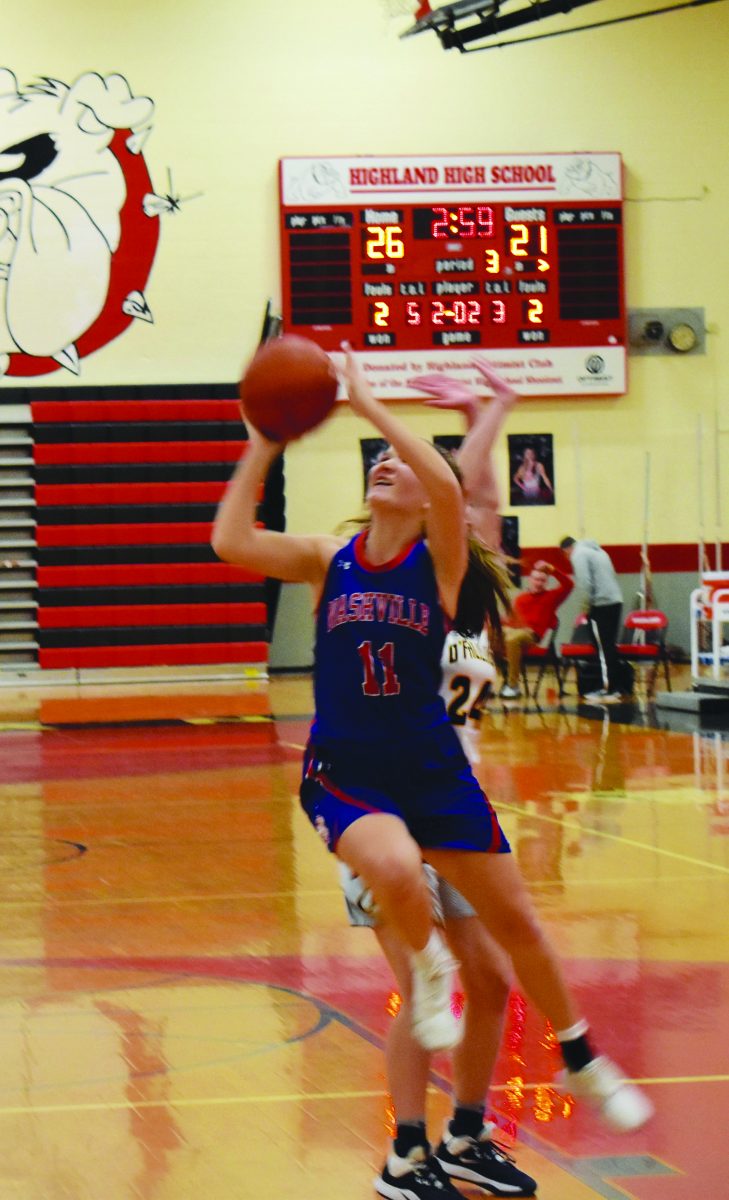 Emily Schnitker puts up a shot during the Highland Tournament play last week.