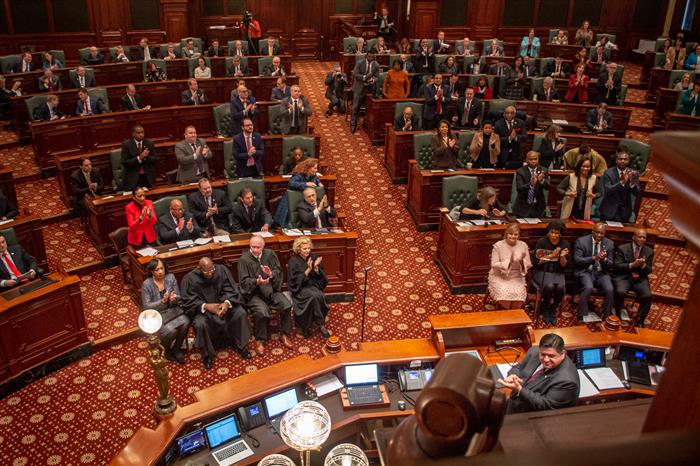 Photo Credit/Capitol News: Gov. J.B. Pritzker during his State of the State address.

“Corruption is the root of Illinois’ problems, I was happy to hear that Governor Pritzker supports stronger ethics reforms such as legislation I co-sponsored that would ban lawmakers from serving as paid lobbyists. However, I was disappointed we didn’t hear anything about fair maps. The current process of drawing political maps to suit the politician instead of putting the choice in the people’s hands is corrupt. Our four fathers platted America using straight lines instead of drawing boundaries to benefit politicians. Taking the redistricting process away from politicians goes hand in hand with much needed ethics reforms. The recent guilty plea by a member of the General Assembly should provide a sense of urgency for the legislature to approve these reforms. I hope House Democrats give us the opportunity to vote on stronger ethics reforms as soon as session reconvenes.”

State Representative Terri Bryant (R-Murphysboro) issued the following statement after Governor JB Pritzker delivered his 2nd State of the State Address to a joint Session of the Illinois legislature on Wednesday.

“Although I do not agree on every priority laid out by the Governor, I was encouraged to hear the him touch on a couple of legislative items that I believe should be the major focus of the 2020 spring legislative Session,” Bryant said. “As for myself, I would like to see the Session focus on reforming ethics laws, providing our citizens with property tax relief, and a move to change the way legislative maps are drawn to make the process more fair and equitable.”

Senator Paul Schimpf’s Statement on the Governor’s State of the State Address:

“While I commend the Governor’s positive attitude and calls to find common ground, his speech ignored the looming financial catastrophe

our state faces if we cannot curtail our insatiable appetite for expansive government and higher taxes.  During this period of national economic growth,

we should be getting our financial house in order, paying down our bill backlog, and attaining pension solvency.

Just as we do in our own homes, we simply cannot spend what we don’t have.  Raising taxes on hard working Illinois families is not the answer.

Instead, Governor Pritzker seems determined to remake our state into a more radical version of California through dramatic spending increases.”